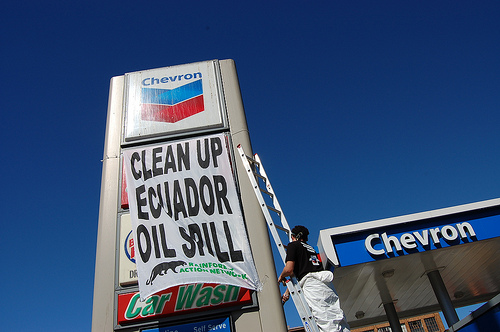 On eve of enforcement trial, Canada’s civil society calls for Chevron’s assets to be frozen so Ecuador judgment can be paid

September 7, 2016 (Toronto, ON ) Some of Canada’s largest environmental, labor and civil society organizations have now joined the growing international community demanding that Chevron clean up its toxic waste in the Ecuadorian Amazon and cease selling its assets in Canada while a debt collection action proceeds to force the company to comply with its US $10 billion liability to the people of Ecuador.

In a public letter released today, more than one dozen Canadian organizations -­including Friends of the Earth, Greenpeace, Idle No More Canada, MiningWatch, Sierra Club and Sierra Club British Columbia, United Steelworkers, and Unifor -­condemned Chevron not only for its actions in Ecuador, but its efforts to silence critics and abuse the civil justice system to evade paying the Ecuador judgment. The letter was published less than a week before a trial is scheduled to begin in Toronto to seize Chevron’s assets in Canada to force the company to comply with its liability to remediate what many call the “Amazon Chernobyl” in Ecuador. Chevron confessed to deliberately dumping billions of gallons of toxic oil drilling waters over the course of decades in Ecuador’s Amazon, resulting in massive environmental devastation and a health crisis affecting thousands of people.

Every court that has considered the evidence in Ecuador – including the country’s Supreme Court — ruled against Chevron, yet the company still refuses to pay and has dragged out multiple legal battles in different countries over the course of decades to avoid paying for a cleanup. As a result, the communities in Ecuador affected by the pollution have been forced to pursue Chevron to Canada to collect on the company’s debt.

The letter also calls on Canadian authorities to prevent Chevron from selling any of its Canadian assets before a decision can be reached in the trial, stating that it “would set a terrible precedent for other corporations intending to evade responsibility for environmental and human rights crimes.” It has been reported recently that Chevron is already trying to sell several billions of dollars worth of its estimated US $15 billion in Canadian assets. Chevron, after insisting the trial take place in Ecuador and promising to abide by any judgment there, stripped its assets from the country as the evidence mounted against it. The trial in Ecuador lasted from 2001 to 2013, largely because of the company’s deliberate strategy of delay.

“The global community knows Chevron is guilty of deliberate and massive contamination in Ecuador,” said Paul Paz y Miño, Associate Director of Amazon Watch. “Wherever Chevron runs to try to escape justice, the company will find itself already exposed as a global polluter and corporate criminal.”

“The Canadian environmental and human rights community has joined forces with the affected communities in Ecuador because we recognize this to be one of the most important corporate accountability cases in history,” said Melina Laboucan-Massimo Climate & Energy Campaigner with Greenpeace Canada. “Chevron must not be allowed to evade its legal and moral responsibilities simply because it has the might to fight on indefinitely in the courts,” she continued.

“Canadians want justice for Ecuador’s indigenous people. Prime Minister Trudeau should help them get it,” added Beatrice Olivastri, CEO, Friends of the Earth Canada. “Canadians are working to make our country a place where the victims of transnational corporations can find justice — not to deny justice to people who have already suffered so much harm,” said Jamie Kneen, Communications and Outreach Coordinator of MiningWatch Canada.

“For too long oil companies have operated with impunity, leaving a legacy of environmental destruction and human rights abuses,” said Sierra Club BC campaigns director Caitlyn Vernon. “Whether in Canada or around the world, oil companies such as Chevron, Enbridge and Kinder Morgan must be held accountable for oil spills, climate change impacts and their treatment of local and indigenous populations.”

“The people of Canada are not fooled by Chevron’s tactic of smearing the very people it poisoned in an attempt to escape justice for crimes it admitted to in Ecuador,” said Kevin Koenig, Amazon Watch’s Ecuador Program Director. “The Supreme Court of Canada sided with the Ecuadorians unanimously and we expect Chevron will lose once again.

“Unlike Chevron’s retaliatory SLAPP suit in the United States (also condemned by many human rights and environmental NGOs), the company will have to respond in Canada based on the merits of the case and its actual conduct in Ecuador,” Koenig added. “Chevron stands no chance of winning on those grounds. It’s time for the company’s management team to stop delaying the inevitable, because every day it drags this case on more Ecuadorians get sick and die from toxic contamination and the more the company’s own reputation suffers.”

“We are grateful that the people of Canada, just like their Supreme Court, have chosen to side with those of us affected by Chevron’s deplorable actions when it polluted our communities and water supply. The indigenous peoples of Ecuador deserve full access to justice and a healthy environment so that we and our Amazonian neighbors can live with dignity,” said Humberto Piaguaje, President of the Union of Affected Communities in Ecuador who will be in attendance.