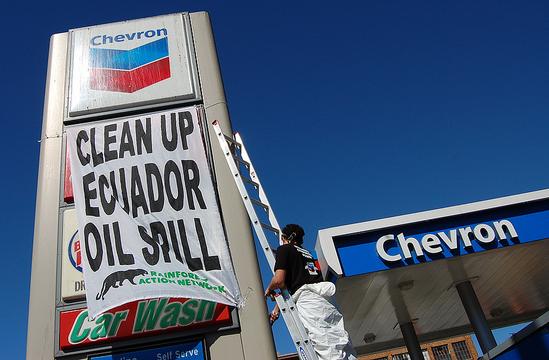 In an apparent coup for the oil giant’s efforts to undermine a $19 billion environmental judgment in Ecuador, an international tribunal has suggested that the Ecuadorians’ claims in that case were all settled and extinguished in 1995

FORTUNE — On Tuesday evening an international arbitration panel issued a ruling suggesting that a $19 billion judgment against Chevron won in 2011 in Ecuador by the Amazon Defense Front was based on claims that had already been definitively settled and extinguished in 1995—eight years before the Ecuador case was filed.

"It pulls the legal rug out from under the [Front’s] whole fraudulent litigation scheme," says an exuberant R. Hewitt Pate, Chevron’s general counsel, in an interview Wednesday. "This is a definitive ruling on the single most important legal issue in the entire case." The panel ruling came in an arbitration brought by Chevron against the Republic of Ecuador under a 1993 investment treaty.

A comment could not immediately be obtained from the Republic of Ecuador, which has fully litigated the arbitration—but also criticized it as unfair. Bill Hamilton of Fenton Communications, a spokesman for the Amazon Defense Front, notes in an email that the Front itself was not a party to the arbitration (though it submitted amicus briefs) and adds: "The Ecuadorian government has long since denounced these hearings. It is a forum for and by Chevron that has no significance."

The Front’s litigation in Lago Agrio, Ecuador alleges environmental contamination committed by a subsidiary of Texaco—which was acquired by Chevron in 2001—when it drilled for oil in Eastern Ecuador from 1964 to 1992. The litigation is currently being played out in six main forums, of which the arbitration tribunal is likely one of the most important.

The first forum is Ecuador, where the $19 billion judgment has been affirmed by an intermediate court and is now pending before the country’s supreme court. But because Chevron has virtually no assets in Ecuador, the judgment is worthless unless the Front can find some country in which Chevron has assets that is also willing to enforce it.

The fifth forum is the United States. Though the Front has not tried to enforce its judgment there, Chevron has filed its own civil racketeering case in Manhattan, alleging that the Front and its lead U.S. attorney and strategist, Steven Donziger, won the $19 billion judgment through a pattern of bribery, extortion, mail fraud, witness tampering, obstruction of justice, and money laundering. Based on evidence submitted by Chevron so far, U.S. District Judge Lewis Kaplan has already found "at least probable cause" to believe that many of these crimes occurred. The full trial is scheduled to begin October 15, although Donziger is attempting to have Kaplan tossed from the case for alleged bias in an appeal being argued before the U.S. Court of Appeals for the Second Circuit on September 26.

Finally, Chevron filed the international arbitration proceeding—the sixth forum—in September 2009 under the U.S.-Ecuador Bilateral Investment Treaty (or "BIT treaty"), which is administered by the Permanent Court of Arbitration in the Hague. The ultimate goal of this case is to hold Ecuador responsible for allegedly having failed to honor its obligations in the 1995 settlement contract that it signed with Texaco. If Chevron prevails, the company stands to win a judgment that would essentially hold Ecuador responsible for any and all damages Chevron incurs from defending the $19 billion judgment—including all legal fees paid and any assets ultimately seized. Chevron could then take the arbitration judgment and attempt to enforce it in the courts of any country in which Ecuador has assets.

In the arbitration Chevron has argued, among other things, that Texaco’s prior settlement of its environmental liability with the Republic of Ecuador in 1995 precludes all of the Amazon Defense Front’s subsequent litigation, and the company also alleges that the Republic has colluded with the Front to bring that litigation and to deny Chevron justice in Ecuador’s courts.

In May 1995, three years after Texaco left Ecuador, the Republic of Ecuador and Texaco reached a settlement of all of the government’s environmental claims against Texaco. As part of the settlement, Texaco promised to clean up a percentage of the well sites roughly corresponding to its percentage ownership in the consortium that made money from the drilling. (Ecuador’s state-owned oil company, PetroEcuador, was the 62.5% majority owner of that consortium from 1976 to 1992, so Texaco was required to clean up only a minority of the well sites.) The settlement did not, however, extinguish the claims of individual third parties like, say, villagers who might claim to have contracted cancer from the oil contamination, or to have lost a cow that got stuck in an oil-filled pit.

In 1998, the Republic of Ecuador certified that Texaco had completed the reparations work it undertook to perform in the 1995 agreement and released the company from all environmental claims.

In 1999, however, Ecuador enacted a new law, the Environmental Management Act, which allows individual plaintiffs to bring claims for the types of environmental harm—such as the contamination left in oil drilling sites—that formerly could have only been brought by the government of Ecuador itself.

In 2003, when the Amazon Defense Front filed its case in Lago Agrio, it was filed under the EMA, and sought only such generalized (or "collective" or "diffuse") forms of relief. Though 48 individuals served as named plaintiffs, none of them claimed to have suffered any individualized harm from the oil spill—like cancer, say, or lost cattle. The suit sought, instead, environmental reparations like soil and groundwater remediation and improvements to the healthcare and potable water systems.

In yesterday’s ruling, the arbitrators unanimously agreed that all such "collective" or "diffuse" forms of environmental relief had been settled and extinguished by the 1995 settlement agreement between Ecuador and Texaco. Accordingly, they reasoned, even if individual third parties were later given standing to seek such relief, they had, by that time, no rights left to assert. The only party that possessed such rights in 1995—the government—had settled all those claims.

"It is not juridically possible for a person to exercise a right which no longer exists," the panel wrote, "even if, were that right to remain in existence, that person has newly acquired the right to exercise it."

In an email, Chris Gowen, a spokesperson for Steve Donziger, the Front’s lead U.S. attorney and spokesperson, writes, "The decision was essentially purchased by Chevron from a completely illegitimate court with no authority over the case and the facts. Chevron … is now choosing pretend courts all over the world to get judgments in their favor so the media will cover it."

In accordance with the rules of the Permanent Court of Arbitration, one arbitrator was chosen by Ecuador, one by Chevron, and the third by an administrative body of the PCA itself. Ecuador’s choice was Vaughan Lowe, a professor of public international law at Oxford; Chevron’s was Horacio A. Grigera Naón, the director of the Center for International Commercial Arbitration at American University Washington College of Law; and the PCA chose as the panel’s president V.V. Veeder, a London-based Queen’s counsel. The ruling was unanimous.

Today’s ruling with the fifth issued in the arbitration proceeding. In February it found Ecuador in breach of a 2011 interim ruling ordering it to take steps to suspend the Ecuadorian judgment and attempts to enforce it.

Yesterday’s ruling did not end the arbitration, which will resume in January with hearings into Chevron’s claims of alleged collusion between the Ecuador and the Front and claims that Ecuador’s courts have denied justice to Chevron through, roughly speaking, denials of due process.