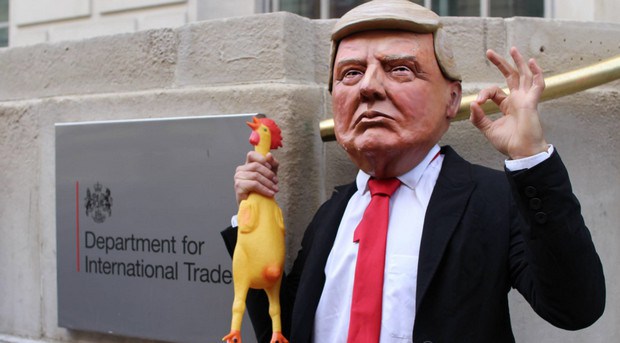 The chlorine washing of food, the controversial “cleaning” technique used by many US poultry producers who want access to the British market post-Brexit, does not remove contaminants, a new study has found.

The investigation, by a team of microbiologists from Southampton University and published in the US journal mBio, found that bacilli such as listeria and salmonella remain completely active after chlorine washing. The process merely makes it impossible to culture them in the lab, giving the false impression that the chlorine washing has been effective.

Apart from a few voluntary codes, the American poultry industry is unregulated compared with that in the EU, allowing for flocks to be kept in far greater densities and leading to a much higher incidence of infection. While chicken farmers in the EU manage contamination through higher welfare standards, smaller flock densities and inoculation, chlorine washing is routinely used in the US right at the end of the process, after slaughter, to clean carcasses. This latest study indicates it simply doesn’t work.

Currently, chlorine-washed chicken is barred from entry to the EU on animal welfare grounds and has become a contentious issue for opponents of liberal trade deals with the US post-Brexit.

Previous studies with similar findings have been dismissed by the US poultry industry as producing “laboratory-only” results with no relevance to the real world. “We therefore tested the strains of listeria and salmonella that we had chlorine-washed on nematodes [roundworms], which have a relatively complex digestive system,” said Professor William Keevil, who led the university team. “All of them died. Many companies and scientists have built their reputations promoting anti-microbial products. This research questions everything they’ve done.”

The study tested contaminated spinach, but Keevil insists the findings apply equally to chicken. “This is very concerning,” he said. The issue, he argues, is less to do with the chicken itself, the contamination of which can be managed by thorough cooking. “It’s that chlorine-washed chicken, giving the impression of being safe, can then cross-contaminate the kitchen.”

The British government has given a series of mixed messages over its willingness to accept chlorine-washed chicken into the UK as part of any post-Brexit trade deal with the US. While Michael Gove, the environment secretary, has insisted animal welfare standards will be maintained, the trade secretary, Liam Fox, told MPs last November: “There are no health reasons why you couldn’t eat chickens that have been washed in chlorinated water.”

In a speech delivered last month, Fox referred to “myths” being used to stymie free trade agreements. Last year, Wilbur Ross, the US commerce secretary, insisted the UK would have to accept American food standards if it was to secure a trade deal. According to a poll by the consumer association Which, 72% of the British population is opposed to the introduction of chlorine-washed chicken on to the British market.

Recently published analysis by the British food and farming pressure group Sustain, found that the incidence of food poisoning in the US could be 10 times higher than in the UK. The US Centers for Disease Control and Prevention reports that about 380 people die each year in America from foodborne salmonella poisoning. Public Health England reports that, between 2005 and 2015, there was not a single death from salmonella poisoning in England and Wales.

Kath Dalmeny, the chief executive of Sustain, described the Southampton research as a wake-up call. “Those dead nematodes are telling us something,” she said. “This research suggests US chlorine washing may give a false impression of food safety. Proper food safety relies on clean production methods with high animal welfare, resilience to disease, and full traceability and labelling – not just end-of-pipe chemical washes.”

Infection is a recognised hazard of all intensive poultry farming and the UK is not immune, with campylobacter regarded as a major problem within the British chicken flock. Incidences of human illness as a result of campylobacter peaked at nearly 115 per 100,000 of the UK population in 2012, but have since declined as new contamination control measures have been put in place.

“The US vigorously champions chemical washes,” said Richard Griffith, the chief executive of the British Poultry Council. “But this hides the shortcomings in their production methods and belies their attitude both to food safety and being open with consumers. It seems that the US, even with growing scientific evidence, is still trying to offload food on us of higher risk and lower quality than our own.”

Liam Fox declined to comment further on the efficacy of chlorine washing for chicken. However, a government spokesperson said: “We have been clear that we will not lower our high food safety and animal welfare standards as a result of any future free trade agreement.”

The Food Standards Agency went further, essentially tying the hands of British negotiators, by pointing out that only water safe for human consumption can be used to remove surface contamination from poultry carcasses in EU countries. “The current rules will remain in place after the UK leaves the EU,” the FSA said.

Tom Super of the National Chicken Council, the trade association for American chicken farmers, described the concerns over chlorine washing raised by the new study as “silly”, and stressed that America is the second-largest exporter of chicken in the world. “We export product safely to more than 100 countries around the globe,” he said. “We’ve been feeding the same chicken to our families for decades. This has never been an issue of science, rather one of politics and protectionism.”

What’s the deal with Cambodia and China’s FTA?