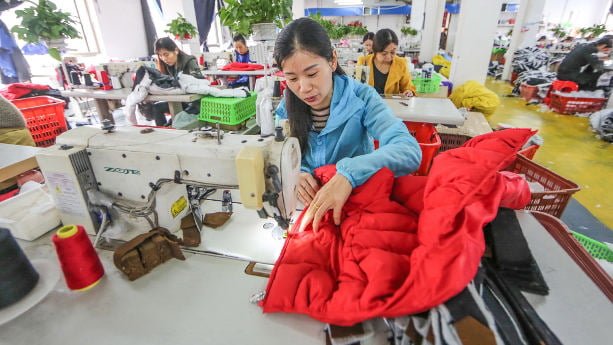 China’s textile industry, a sector that provides jobs to over 27.15 million people in both production and sales, will tap more growth seams in economies related to the Belt and Road Initiative (BRI) and improve garment makers’ innovation capabilities to stay competitive this year, said a senior industry official.

“The simplification and unification of rules will boost resource flows within the region, and cut transaction costs and risks,” he said, adding that the RCEP will further enrich regional cooperative content in areas such as digital economy and intellectual property protection, paving the way for future cooperation among industries across the mega trade bloc.

The rise of emerging markets such as Vietnam, India and Bangladesh has also changed the division pattern of labor and trade in the global textile business, he said.

Affected by weak demand from developed markets and the rise of protectionism, China’s textile and apparel exports dropped 2.2 per cent year-on-year to $232.31 billion between January and October last year, data from Beijing-based CNTAC shows.

In the meantime, China’s textile and apparel shipments to the US, the EU and Japan declined 4.5 per cent, five per cent and 5.5 per cent year-on-year respectively, while its total exports to countries and regions participating in the BRI grew by 1.3 per cent, and exports to Africa jumped 6.6 per cent from the same period a year earlier.

“Textile makers in China have already begun to adopt renewable energy sources, environmentally friendly textile materials including biomass fiber and recycled substances to make the whole production process pollution free, as well as cut dependence on crude oil when producing common synthetic materials such as nylon or polyester,” he said.

Since the fourth industrial revolution is still in its infancy and many technical applications are immature, Sun said the instability of certain new technologies can lead to higher initial investments and trial costs.

For example, Adidas said in November that its two automated plants in Germany and the US will soon shut down, and it will transfer the capacity to Asia.

Huang Qunhui, director of the Institute of Industrial Economics at the Chinese Academy of Social Sciences in Beijing, said domestic companies must have a rational attitude toward relatively advanced industrial applications like quantum computing and other emerging technologies, and deploy more resources in innovation and green development to better compete with their established global rivals.

Zhang Jiangping, the company’s chairman, said the firm will enter overseas markets such as Vietnam and Malaysia soon, after learning of local consumers’ higher purchasing power and changing lifestyles.

“China has fabulous designers, a large market, and outstanding brands, but it needs to make global consumers aware of the charm of Chinese brands, which certainly can be promoted on a bigger stage,” he said.

The business executive also found that crossover branding has become a hot term for many sectors. “Brand collaboration arouses consumers’ curiosity, giving them a new reason to spend. It usually generates unexpected market feedback and decent sales both at home and abroad,” he said.