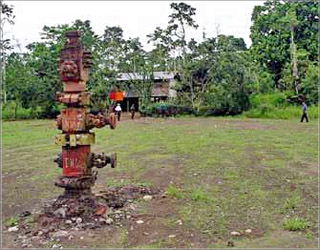 A 1993 federal class action claimed that Chevron and Texaco fouled the Ecuadorian Amazon with oil pollution. Chevron asked that the case be sent to Ecuadorian courts, which the 2nd Circuit eventually ordered in 2003.

Since then, a trial has been under way in the town of Lago Agrio. It has amassed 200,000 pages of evidence, which overwhelmingly point to massive and negligent oil pollution, plaintiffs say.

From the 1960s to the ’90s, Texaco dumped billions of gallons of oily wastewater into streams and rivers in the Amazon, the communities say. It did it to cut costs by avoiding environmentally responsible re-injection technology.

The oil company dumped drilling mud and waste crude into 916 unlined pits cut into the jungle floor, and set some of the pits on fire, the communities say.

Texaco, acquired by Chevron in 2002, violated industry standards, national and international law, and tried to cover up its massive pollution, the Ecuadorian plaintiffs say.

The complaint claims that oil contamination from 350 well sites in a 1,500-square-mile concession has "robbed [six indigenous groups] of their ancestral lands and devastated their cultures," leaving "the natural environment of the Amazon rainforest ... for the most part poisoned."

Plaintiffs cite a peer-reviewed study by a court-appointed expert, environmental engineer Dr. Richard Carbrera, indicating that at least 1,401 people in the Lago Agrio region have died of cancer from the pollution; the report put a $27.3 billion price tag on cleanup and mitigation. Texaco’s previous attempt to derail the mounting evidence, a 2005 filing to indemnify itself through the American Arbitration Association, was rejected after an evidentiary hearing in 2007, plaintiffs say.

Now, Texaco is asking a panel of United Nations Commission on International Trade Law, which works in cooperation with the World Trade Organization, to release it from environmental liability, the communities say.

Community members may not participate in this administrative forum, they say. Represented by Emery Celli Brinckerhoff & Abady in Manhattan, they seek a declaration requiring Texaco to abide by its promise to subject itself to Ecuadorian jurisdiction and an order staying any possible arbitration under the U.S.-Ecuador Bilateral Investment Treaty.

In a Chevron press release from 2007, one of many attachments in 300 pages of appendices, Chevron claimed that the plaintiffs have unduly "politicized" the lawsuit. The Ecuadorian executive branch’s promise to help gather evidence against Chevron, along with unfulfilled remediation by Petroecuador, deny Chevron due process, the multinational corporation claims.