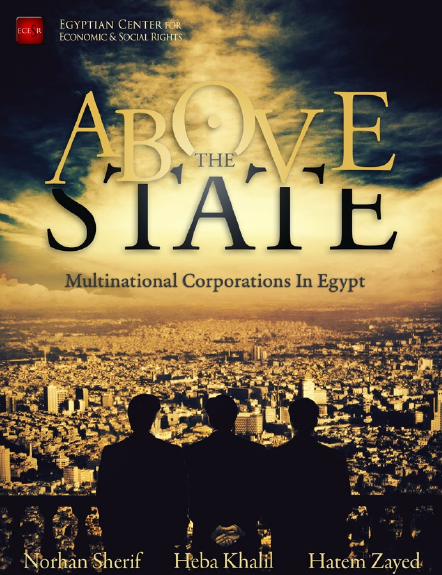 Foreign investment is crucial for reviving Egypt’s economy, but a new report reveals it can come at a considerable cost, writes Stefan Weichert

A bilateral investment treaty (BIT) is an agreement establishing the conditions for private investment by the nationals and companies of one state in another. It is better known as facilitating foreign direct investment (FDI).

When such treaties are signed between two countries, they are supposed to support economic growth and other benefits for the signatory countries. However, this is not always the case for Egypt, according to the findings of a report issued recently by the Egyptian Centre for Economic and Social Rights (ECESR), an NGO.

The report, entitled "Above the State: Multinational Corporations in Egypt," estimates that the country loses some LE68 billion annually because more than one hundred BITs provide tax and other benefits to multinational corporations.

This high number of bilateral investment treaties ranks Egypt as first among the Arab countries and fifth in the world.

The report explains that the presence and influence of multinational corporations has increased in the world as a result of globalisation. When corporations "are not bound by one jurisdiction... they are usually granted the freedom to choose the laws they abide by, the jurisdictions they answer to, and the rules they operate according to," it says.

"Egypt’s investment regime does not place legal restrictions on the investor to transfer the profits of the company outside Egypt, nor does it stipulate that the investor has to reinvest a part of their profits in Egypt," the report notes.

Because of their design, the BITs could pose a threat to Egypt’s economic and social independence, according to the report. In many cases, they benefit foreign companies more than local ones, and in some cases they limit Egypt’s authority over its own land.

This happens because some of the treaties do not distinguish between local and foreign investors and thus negate the possibility of the government subsidising energy for local companies without providing the same subsidies for large multinational corporations.

The fact that Egypt has no restrictions on company ownership of property and land, except in Sinai, gives foreigners access to land in the country.

The laws also ensure that economic crimes including theft, corruption and bribery in which multinational companies are involved, are handled by the Investment Authority and not the regular court system.

Under BITs, if a country violates one of the items agreed upon, the multinational corporation concerned can resort to international arbitration. According to the report, Egypt is currently being sued for an estimated LE100 billion because of its bilateral investment obligations.

A total of 13 cases, with 12 still pending, have been taken out against Egypt since the 25 January Revolution at the International Centre for the Settlement of Investment Disputes (ICSID), the report says, and the amount of money involved could be higher than publicly admitted, it adds.

Most of the cases against Egypt are based on BITs signed under the former Mubarak regime. Some of them are corrupt, the report states. The treaties have not only led to economic problems, but some multinational corporations have also ignored human rights since the treaties make it almost impossible to sue them.

The UN Human Rights Council has adopted a resolution to find ways to legally bind multinational corporations so they abide by human rights laws in the countries they operate in. Many developing countries are pushing for such laws, but Egypt has hesitated, according to the report.

China and Malaysia have set out rules to make multinational corporations share technology with national companies when operating in them. India has started revising its bilateral investment treaties to ease their terms for its benefit.

Egypt has not followed suit, the report says, adding that there is no reason why the country should not follow best practices pioneered elsewhere.

There have been various examples of multinational corporations taking out lawsuits against Egypt:

Union Fenosa Gas: In December 2012, Egypt stopped supplying gas to the liquefaction and exporting plant in Damietta in order to make more available for domestic consumption. The Spanish Union Fenosa Gas Company, which owns 80 per cent of the plant, filed a complaint requesting $6 billion in damages for breach of contract. The case is pending at the International Centre for the Settlement of Investment Disputes, the arbitration body.

East Mediterranean Gas: This Company is seeking $8 billion in compensation on the grounds that Egypt cancelled its gas export deal with Israel. The deal was originally signed by ousted former president Hosni Mubarak’s minister of petroleum, Sameh Fahmi, and is said to have sold Egyptian gas below market value, resulting in almost LE10 billion in lost revenues for the country. The lawsuit is under the UN Commission on International Trade Law and the Egypt-US bilateral investment treaty.

Bawabet Al-Kuwait Holding Company: The Kuwaiti Company is suing Egypt because of the cancellation of its free zone status and the privileges accompanying it that include tax and customs exemptions. It also claims there were increases in the price of the gas supplied to the company under the contract signed by the former Egyptian regime.