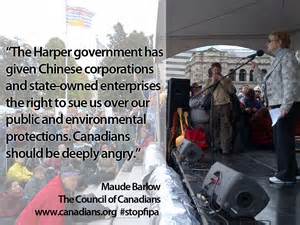 Vancouver - Don Davies, Canadian Member of Parliament for the NDP representing the riding of Vancouver Kingsway, discusses the approval of the Canada-China Foreign Investment Promotion and Protection Agreement (FIPA) and its future impact on Canada and First Nations.

How does the ratification of FIPA undermine Canada’s sovereignty, First Nations’ indigenous rights, our democratic rights, and our environmental rights?

The Canada-China FIPA creates a tribunal system outside of the jurisdiction of Canada’s justice system. These tribunals serve to adjudicate claims brought by investors against governments resulting from a perceived loss of profit or potential profit. Claims can include challenges to laws or regulations aimed at protecting our environment, managing our natural resources or other significant domestic policy areas. If investors persuade the tribunals that their profit expectations have been interfered with, tribunals can award damages to investors costing Canadian taxpayers millions - or billions - of dollars. Moreover, parties can request secret arbitration panels to adjudicate the claims, meaning Canadians may never know details about claims against Canada or damages awarded at the taxpayers’ expense. The FIPA undermines Canada’s sovereignty and First Nations’ rights in three specific ways. First, these tribunals operate outside of Canadian or First Nations’ jurisdiction, yet they are empowered to deliver decisions that could cost the public purse (owned by non-indigenous and indigenous peoples) massive sums of money. These decisions can be rendered against laws made in the public’s interest by democratically-elected governments.

Second, many experts agree that the mere threat of claims can cause a chilling effect on lawmakers in Canada. Governments could become wary of legislating or regulating in a way that could trigger a massive investor claim, even if these new government measures are needed to protect the public interest.

Finally, Conservative negotiators agreed to lock Canada in to this poorly-negotiated deal for 31 years (until 2045). This binds the hands of future governments and interferes with the democratic will of Canadians.

Regarding the degree of risks, some have called the FIPA deal “reckless.” Would you agree or disagree with this description and if so why?

Canadians of a variety of political persuasions have publicly criticized the FIPA. Public interest advocacy groups, First Nations, international trade experts, environmentalists and others have done a remarkable job raising awareness about this deal and its negative impacts on Canada. Even some conservative columnists, such as Diane Francis from the National Post, have publicly criticized the FIPA. In a November 2012 column, Ms. Francis stated, “there is nothing in this deal with China that will protect Canadians.” As a leading conservative voice in Canada’s media, it is telling that she chose to criticize a Conservative government initiative so unequivocally. It speaks to, what would appear to be, the Conservative government’s decision to unilaterally weaken Canada’s interests at the negotiating table in order to conclude a deal with China quickly. The result is a deal that is lop-sided in favour of Chinese investors, includes a secretive tribunal process which could impose massive monetary damages on Canadian taxpayers, and includes a “survival clause” which means the FIPA will apply to bilateral investments for a generation. This approach to negotiating is undoubtedly a reckless one.

Why is the FIPA deal lopsided in favor of China’s business interests and why was there no opposition from Conservative MPs who neglected to stand up in protest for a fairer deal?

In their haste to sign any deal with China, it is clear the Conservative government sold Canada short at the negotiating table. Trade and investment deals can be fair and can lay the groundwork for mutually-beneficial outcomes for the peoples of both countries. However, upon close inspection of this FIPA, this deal is neither reciprocal nor balanced. The Canada-China FIPA gives clear advantages to Chinese investments in Canada without securing the same benefits for Canadian companies operating in China. Examples include lop-sided rules on investment review to significant differences in market access. Perhaps most alarming, the FIPA locks-in existing discriminatory measures (against foreign investments) in China - measures that do not exist in Canada - for three decades.

It’s disappointing that no Conservative MP had the courage to speak publicly for a fairer deal in the FIPA. In April 2013, the NDP presented a motion in the House of Commons to prevent the ratification of the FIPA without major changes and improvements. This motion was voted down by virtually every Conservative and Liberal MP.

Regarding the FIPA approval, what is the difference between a “Cabinet Order in Council” and a vote done with Members of Parliament (MPs)?

According to the terms of the Canadian Constitution, the Executive (meaning Cabinet and the Prime Minister) have the prerogative to negotiate, sign and ratify all international treaties. Thus, the ratification of an international treaty can be conducted by way of a Cabinet Order-in-Council – or decision – without the requirement of a vote by MPs in the legislative branch of government, or Parliament.

Does Parliament have any power to stop this treaty since the ratification of FIPA was done in secret before they returned to work or is it a done deal?

Parliament does not have the power to thwart the ratification of an international treaty. Unlike FIPAs, Free Trade Agreements (FTA) generally require the approval of implementing legislation by Parliament in order for Canadian laws to conform to obligations under the FTA. Because FIPAs are relatively more limited in scope, implementing legislation is generally not deemed necessary. Despite this limitation, the NDP forced a debate and vote on the FIPA in the House of Commons in April 2013. This motion, which called on the government not to ratify the FIPA, was voted down by Conservative and Liberal MPs.