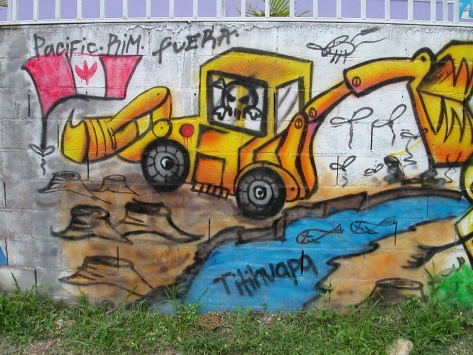 First a Gold Rush, Then the Lawyers

SAN ISIDRO, El Salvador — When a Central American gold rush brought a Canadian mining company here a few years ago, the company promised to stake a claim that would be as green as the lush hills.

The copious amounts of water needed would come only from the rain, not from the nearby Rio Lempa that is this country’s lifeline, the company said. Cyanide, a toxic chemical used to extract gold embedded in rocks, would be dispersed naturally, dried by sunlight in vast double-lined pools. Several hundred jobs could be created here, in one of the country’s poorest regions.

“No other mine in North America has gone to this level of environmental protection,” said Tom Shrake, the chief executive of the Canadian company, Pacific Rim, which is seeking to tap a vein that it says could be worth hundreds of millions of dollars.

But when the government of El Salvador, facing mounting public concern over the consequences of mining, failed to grant the company the final permit it needed, Pacific Rim sought to extract a different kind of green : $77 million from the nation’s treasury as compensation for lost profits.

Pacific Rim is suing the Salvadoran government in an international investment court, one of scores of cases in recent years in which frustrated oil, gas and mining investors, using provisions of trade agreements, have sought to recoup losses from mostly developing countries.

Pacific Rim has cited as a precedent a landmark case from Mexico in 2000 in which the government was sued under the North American Free Trade Agreement and forced to pay a California company, Metalclad, $15.6 million in damages. The company sued after it said local authorities had thwarted its efforts to build a hazardous waste treatment plant despite assurances from the Mexican government that it would get the needed permits.

Since then, environmental advocates say, corporations have increasingly taken nations to court under regional trade agreements.

One of the biggest payouts occurred last year, when an arbitration panel awarded Chevron $700 million in a dispute with Ecuador over what it considered a delay in settling lawsuits over oil contracts, even as the company lost a much larger environmental ruling in Ecuador’s own judicial system. In another example, a Malaysian firm, MTD Equity, used provisions of an investment treaty between Malaysia and Chile to win a $10.8 million case against Chile in 2004 over a residential and commercial development that government authorities ended up opposing.

The Pacific Rim case, now before a World Bank court in Washington, is the first of its kind to come under the Central America Free Trade Agreement that was approved in 2005, all sides in the dispute say.

Though the company went to court to ensure the level playing field for foreign businesses that it says the treaty guarantees, the case has angered Salvadoran officials, who consider it an attack on the sovereignty of a nation still struggling to fortify its institutions nearly 20 years after a brutal civil war.

“They are using the tribunal to dictate El Salvador’s environmental policies,” said Marcos Orellana, a lawyer for the Center for International Environmental Law in Washington, which has filed a brief supporting El Salvador.

In the court hearing the case, the International Centre for Settlement of Investment Disputes, Latin American governments make up 9 percent of the court’s 155 members but about 55 percent of the cases, according to the Institute for Policy Studies, a left-leaning research group in Washington.

The imbalance of cases in the region arises both from the bounty of natural resources there and political candidates who are making good on campaign promises to rein in foreign corporations or more closely examine their projects, the institute said.

With gold prices at record highs, companies are scouring the earth for every last deposit, and a run of new mines in Central America, particularly in Guatemala and Honduras, as well as a legacy of contamination from old ones is making the region a focal point for the fight.

“Past experience with mining companies has demonstrated to us that the country has been, in the past, not very careful in verifying that these projects were developed within acceptable parameters for the environment and our water resources,” said El Salvador’s attorney general, Benjamín Pleités Mazzini.

Pacific Rim began exploring an existing mine just north of San Isidro at El Dorado in 2002 and eventually discovered a new, potentially lucrative vein. Right-leaning governments initially appeared on course to grant the mine final approval but stalled amid signs that public sentiment was turning against the project.

By 2005, community members who rely on tributaries of the Rio Lempa for their farms complained that the water was drying up during the exploration phase. Mr. Shrake said that river water was used only briefly and that the company’s activities did not account for the problem. The left-leaning government now in power has refused to sign off on the project.

Because Canada is not a party to Cafta, Pacific Rim filed suit in 2009 through a United States subsidiary.

Conflict has shadowed the case. Heated demonstrations have occurred, as both sides claim they have the will of the people. Pacific Rim says some of its employees have been threatened, while those on the other side say several mining opponents have been killed or gone missing in the past few years. This month, the body of a university student who disappeared while posting antimining fliers was found.

Local investigators have chalked up the cases to common crime in a region with its share of gang and other violence, but residents say the episodes have not been thoroughly investigated and hearken back to the darkest chapters of the war.

“People are worried about the lack of capacity to monitor these mines,” said Andrés McKinley, former El Salvador director for Oxfam America, the nongovernmental organization that has taken the lead in organizing opposition to mining here. “People need jobs, but not jobs at any cost.”

El Salvador’s environment, he said, is fragile. It has the second-worst deforestation in the hemisphere, after Haiti, and 96 percent of its surface water is contaminated, mostly with agricultural and industrial runoff, he said.

“Can this country sustain an industry in mining ?” Mr. McKinley said.

It appears El Salvador, the only country in Central America to experience a decline in foreign investment last year, was preparing to answer yes. It has issued 29 licenses for mining exploration since 1999.

But Mr. Pleités, the attorney general, suggested new permits would not be issued until investors, environmental groups, outside experts and others came together to write a plan to more closely regulate the industry.

Mr. Shrake countered that the government stands to scare off investors if it cannot even approve a project as environmentally clean as Pacific Rim has sought to make it.

“We raised the bar for environmental protection,” he said, touring the remnants of the ranch where the gold would be tapped.

Neto Mendez Murillo, 49, a driver for Pacific Rim, said he and other local residents are counting on the final approval of the mine for badly needed jobs. The only options for work now, he said, are low-paying jobs in the corn, bean and sugar cane fields, or in the United States.

“We are waiting for the gold jobs to change our lives,” he said.

But Francisco Pineda, a farmer who has led raucous protests against the mine, jumping on machinery at one rally, said he doubted the company could contain all the cyanide it would use.

“We don’t believe what they say,” he said. “The river is too important for us, and they already tampered with it. We are fighting for survival here.”