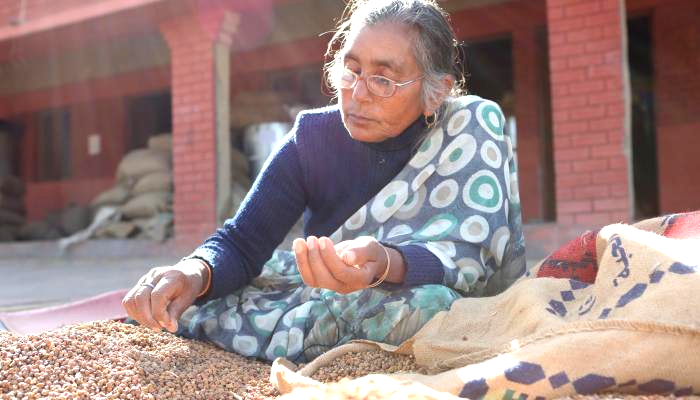 "All new FTAs take away the sui generis option in TRIPS in WTO and are aimed at giving fangs to International Union for the Protection of New Varieties of Plants (UPOV), which establishes rules of uniformity, at a time when we know that diversity is vital to nutrition as well as climate resilience."

Free people from ‘dictatorship’ of 0.01%

Chemical corporations are trying to impose patents on all living organisms.

"The only way to counter globalisation just a plot of land in some central place, keep it covered in grass, let there be a single tree, even a wild tree.” This is how dear friend and eminent writer Mahasweta Devi, who passed away on July 28, at the age of 90, quietly laid out her imagination for freedom in our times of corporate globalisation in one of her last talks. Our freedoms, she reminds us, are with grass and trees, with wildness and self-organisation (swaraj), when the dominant economic systems would tear down every tree and round up the last blade of grass. From the days we jointly wrote about the madness of covering our beautiful biodiverse Hindustan with monocultures of eucalyptus plantations, which were creating green deserts, to the work we did together on the impact of globalisation on women, Mahaswetadi remained the voice of the earth, of the marginalised and criminalised communities.

She could see with her poetic imagination how globalisation, based on free trade agreements (FTAs), written by and for corporations, was taking away the freedoms of people and all beings. “Free trade” is not just about how we trade. It is about how we live and whether we live. It is about how we think and whether we think. In the last two decades, our economies, our production and consumption patterns, our chances of survival and the emergence of a very small group of parasitic billionaires, have all been shaped by the rules of deregulation in the WTO agreements. In 1994, in Marrakesh, Morocco, we signed the GATT agreements which led to the creation of WTO in 1995. The WTO agreements are written by corporations for corporations, to expand their control on resources, production, markets and trade, establish monopolies and destroy both economic and political democracy.

Monsanto wrote the Trade-Related Aspects of Intellectual Property Rights (TRIPS) agreement of WTO — which is an attempt to claim seeds as Monsanto’s invention, and own seeds as “intellectual property” through patents. It has only one aim — to own and control seed and make super-profits through the collection of royalties. We have seen the consequences of this illegitimate corporate-defined “property” right in India; with extortion of “royalties” for genetically modified (GMO) seeds leading to high seed prices. Cargill, Inc wrote the WTO’s agreement on agriculture. As a result, India, the largest producer of oilseeds and pulses, has become the biggest importer of both these produce. The edible oils being imported are GMO soya oil and palm oil — both extracted with hexane through solvent extraction; both leading to massive deforestation in Argentina, Indonesia and Brazil.

We are importing dal from Canada and Mozambique, while our fertile pulse growing lands are being handed over to foreign corporations for growing bio fuel. This model destroys agriculture and food systems everywhere. We are thus destroying our health as well as the health of the planet. The junk food industry wrote the Application of Sanitary and Phytosanitary Measures (SPS) agreement of WTO. Our Prevention of Food Adulteration Act 1954 was replaced with the Food Safety and Standards Authority of India (FSSAI), which is being used to shut India’s rich and diverse, small-scale, home and cottage industry-based food businesses, under pseudo-safety laws. All new FTAs take away the sui generis option in TRIPS in WTO and are aimed at giving fangs to International Union for the Protection of New Varieties of Plants (UPOV), which establishes rules of uniformity, at a time when we know that diversity is vital to nutrition as well as climate resilience.

Twelve countries, including Australia, Brunei, Canada, Chile, Japan, Malaysia, Mexico, New Zealand, Peru, Singapore, the United States and Vietnam, signed the Trans-Pacific Partnership FTA in February 2016. The Regional Comprehensive Economic Partnership (RCEP) is an FTA between the Asean nations and their six trading partners — India, China, South Korea, Japan, Australia and New Zealand. Since Asean countries are the most populous, RCEP will affect a greater number of people than other FTAs. And through RCEP, these countries may be dragged into the TPP under pressure of harmonisation, especially on issues related to seed. The TPP requires all its signatories to join UPOV 91. It allows patents on “inventions derived from plants” which would open the floodgates of bio-piracy, as in the case of neem, basmati and wheat. The TPP has sections on “biologicals” which covers biological processes and products, thus undoing the exclusions in the WTO TRIPS agreement. Given how there is a rush to patent and impose untested and hazardous vaccines, and new GMO technologies like gene editing and gene drives, it is clear that the TPP is the instrument for the next stage of bio-imperialism.

At WTO, India managed to ensure countries could exclude plants and animals from patentability, which translated into article 3(j) in our patent laws. India ensured that UPOV could not be forced through WTO and countries had a sui generis option for plant varieties. This translated into the Plant Varieties and Farmers’ Rights Act 2001, for which the writer was a member of the expert drafting group. Not having achieved total monopoly on seeds through the WTO, chemical corporations (biotechnology and seed corporations) are trying to impose patents on all living organisms and all production systems based on living organisms through new FTAs. They are also trying to further destroy our local food systems and replace them with industrial junk food by changing food and health safety as well as bio-safety, through “harmonisation”.

Finally, global corporations, and those who control them, are trying to define corporations as having personhood through investor-state dispute settlement (ISDS) systems, which are secret tribunals where corporations and investors can sue governments for acting according to their constitutional obligations in the interest of their citizens. Thus, corporations are trying to replace our democracies with secret agreements and secret courts controlled by the 0.01 per cent super wealthy. The time is ripe for a planetary freedom movement that defends and protects the freedoms of all beings from this 0.01 per cent.