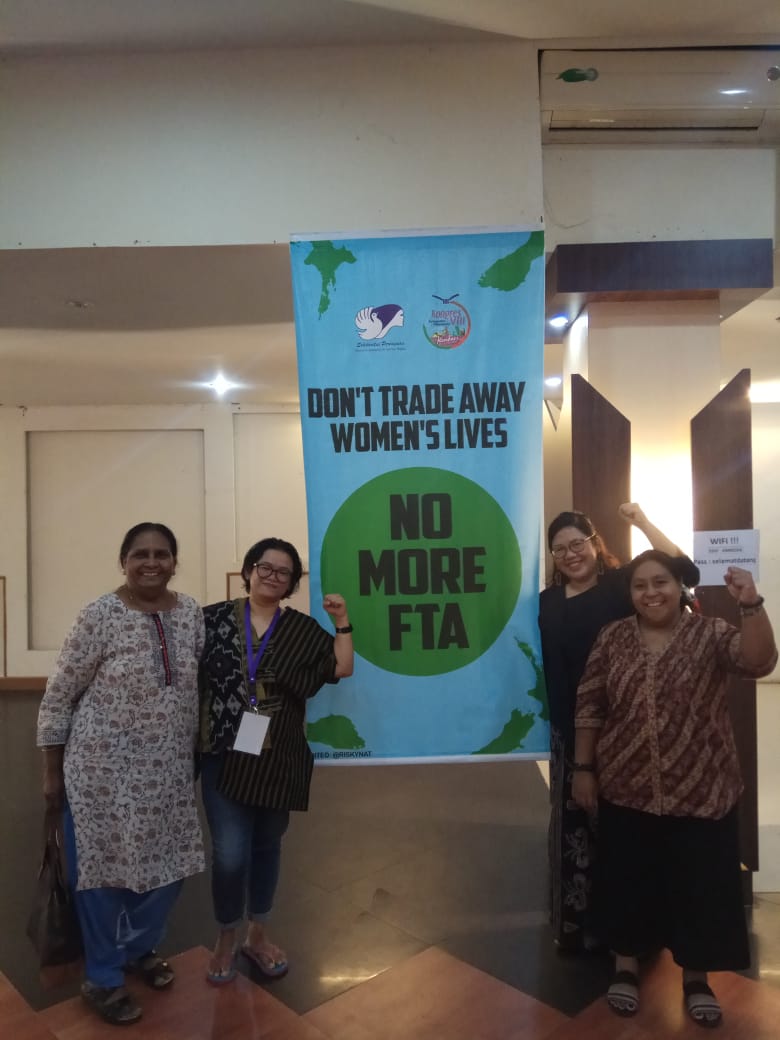 Kendari, 21 July 2019. At least 300 grassroots women and activists from multiple backgrounds – peasants, farmers, fishers, migrant workers, urban poor, etc. – and from 12 regions of Indonesia gathered in Kendari, Southeast Sulawesi to discuss various problems and struggles they face on a daily basis. This event called “Rembuk Nasional Gerakan Perempuan – National Meeting of Women Movement” was initiated by Solidaritas Perempuan, a Feminist Organization in Indonesia. One of the issues that stood out during the discussion was free trade agreements (FTAs).

Free trade agreements open up agriculture, fisheries and land to the foreign investments. Because FTAs provide protections for foreign investment, small-scale and subsistence women peasants are unable to compete with large agriculture businesses. The non-discriminatory principle in trade agreements leads to decreased government’s support and protection for domestic food producers, and reduces tariffs of imported foods as well. “I had a difficult season due to climate change. I couldn’t any longer predict the climate and have an anticipation strategy so I failed to harvest my rice. But I have spent a lot of money on production costs. Although initially I was relieved that some of the harvest could be saved, then I was in shock because of the government’s decision to import rice. This decision made the price drop dramatically. I was like being killed slowly,” said a peasant woman from Central Sulawesi.

Tariffs reduction also deprives governments of a source of revenue, leading to reduced public expenditure that has the heaviest impacts on women. Common funding cuts such as reductions in subsidies, public services, and social welfare have a disproportionately negative impact on women, as they are more likely to be the recipients of these expenditures. For the same reason, women are also disproportionately impacted by the privatization of public goods and services, such as water services. [1] For example, this is a case that poor-urban women in Jakarta experienced: in 1997, without an open bidding process, contracts were signed between PAM JAYA, the state utilities enterprise, and two multinational water companies, the French company Suez Lyonnaise des Eaux and the British Thames Waters. The foreign companies failed to deliver decent water services. “I was being forced to stay up late at night, because only at that time I could access the water. But the quality of water was really bad, it had a pinky color and smelled very bad. It also impacted to my reproductive health, I felt itchy on my vagina and sometimes I also had leukorrhea. I also have to pay with lot of money, because the price is expensive.” said women from Jakarta.

GRAIN in a recent publication also mentioned that RCEP trade deal will intensify land grabbing in Asia. This would certainly worsen the situation in which to this day women in Indonesia continue to struggle for their rights to land. Women not only face corporate greed but also the roots of the patriarchal system that has denied women’s rights to land. “We need the government to address the agrarian conflict, especially what has already happened for many years like in the Seri Bandung village. [2]. It should stop signing more FTAs that fuel, oppress and cause injustice against women,” stated Arieska Kurniawaty, Program Coordinator of Solidaritas Perempuan.

The discussion at the Kendari gathering resulted in several demands from the grassroots women, urging the new elected government of Indonesia to include a women political agenda. One of these demands is to stop negotiating FTAs. Women demand “no more FTAs”.

[1] Applying a gender perspective to the legally binding instrument on transnational corporations and other businesses to protect human rights in trade and investment, The Feminists for A Binding Treaty.

[2] The conflict in the Seri Bandung village,South Sumatera has existed since around 1984 between people and a state-owned sugar plantation company. Women are in the forefront on this struggle