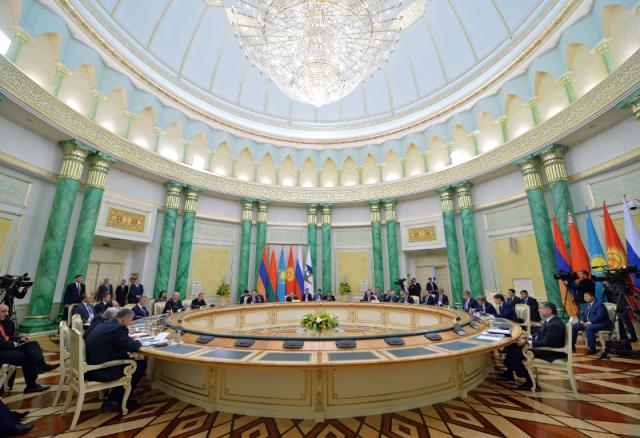 Free trade zones with the EAEU

The EAEU–Singapore Free Trade Agreement was signed at the EAEU summit in Yerevan on October 1, 2019. The document constituted the first step towards the creation of a comprehensive free trade zone between the Eurasian Economic Union (EAEU) and Singapore and, in addition to trade in goods, it will also regulate trade in services and the terms of investment.

The agreement pays due consideration to the experience of working on previously signed documents and also covers possible trade risks in more detail. During the negotiations, particular emphasis was placed on goods that are sensitive for the EAEU market. EAEU Minister for Trade, Veronika Nikishina, stressed that goods such as “beef, cheese, spirits, baby food, dairy products, cars, planes – all these will be exempted from the agreement, we will not be reducing duties on these goods.”

The agreement with Singapore was the third such document the Eurasian Union has signed with third countries.

The Agreement with Vietnam

The EAEU signed its first ever free-trade area (FTA) agreement with Vietnam on May 29, 2015. The agreement entered into force on October 5, 2016. From the outset, the agreement was concluded in the FTA+ format, which stipulates both duty-free trade rules and other interaction formats. Simultaneously with this agreement, the bilateral Russia–Vietnam and Belarus–Vietnam intergovernmental protocols on supporting automotive manufacture in Vietnam entered into force. These agreements established a preferential regime for implementing investment projects for the industrial assembly of Belarusian and Russian automotive equipment in Vietnam.

Since the national economies of the EAEU states need to adapt to the free trade regime, transitional periods of five and ten years were stipulated for certain goods so that import customs duties could be gradually reduced.

According to Nikishina, the EAEU’s trade turnover with Vietnam has grown 40 per cent since the agreement went into force. “Some feared that our exports would remain the same, that we would not be able to take advantage of the Vietnamese market opening up to us; some feared that we would only open our market for Vietnam. These fears proved unfounded: our exports grew by 40 per cent, while imports from Vietnam grew by 34 per cent.” By 2025, duty-free imports of Vietnamese goods will account for 90 per cent of the EAEU’s Common Customs Tariff headings.

Vietnam’s trade with Russia and Kazakhstan is developing with particularly intensity. According to WTO data, the share of Russian exports into Vietnam has been growing dynamically over the past three years: +19.9 per cent in 2016, +34.0 per cent in 2017 and +12.9 per cent in 2018. This growth was due to a sharp increase in exports of grain, mineral resources, iron and steel, fish and seafood, as well as organic chemistry products. Kazakhstan significantly increased its exports to Vietnam in 2017–2018 by 39.0 per cent and 3.6 per cent, respectively. This is due in part to the fact that Kazakhstan started exporting iron and steel, grain, and lead and lead goods into Vietnam.

At the same time, Vietnam would like to increase its trade with the EAEU. Speaking at the Eastern Economic Forum in September 2019, Deputy Prime Minister of Vietnam, Trịnh Dinh Dung, proposed a further reduction of customs barriers in order to improve the opportunities to realize his country’s economic potential.

The second agreement was signed with Iran in May 2018 and entered into force on October 27, 2019. This is a limited agreement valid for three years. One year after its entry into force, the parties will enter into talks on a full-fledged FTA. The agreement is limited due to a low level of liberalization. Reduced customs duties cover only 50 per cent of the total volume of trade between the two countries. In terms of goods, this translates into 502 HS codes for the Union and 360 HS codes for Iran.

The tariff preferences granted to the EAEU by Iran extend to meat and fat-and-oil products, certain types of confectionery products and chocolate, mineral water, grains, tobacco, metals, cosmetics, timber, and individual types of electronic and mechanical equipment. Iran will be granted tariff preferences on many types of foods (including vegetables, fruits and dried fruit), as well as on construction materials, kitchenware, carpets and certain products made of non-ferrous metals.

Armenia stands to benefit most from trade with Iran, as the country is under the economic blockade of Turkey and Azerbaijan and has no common borders with EAEU member states.

The Armenian leadership considered building a third high-voltage power line between Iran and Armenia, as well as the North–South highway, the Meghri hydroelectric power station, and the Meghri Free Economic Zone as the main incentives for Armenia–Iran trade relations. But these projects have stalled in recent years due to economic and domestic political reasons.

Expanding trade and economic cooperation with Iran is also beneficial for Russia. Trade turnover between the two countries totalled USD 1.741 billion in 2018. Russian exports into Iran are estimated at USD 1.208 billion, while Iranian exports into Russia totalled USD 533 million. Deputy Prime Minister of the Russian Federation, Dmitry Kozak, estimates that Russian business will earn additional USD 150 million annually when the provisional agreement is ratified. Other Eurasian countries are also interested in expanding their trade and general economic cooperation with Iran. Given the upcoming signing of the Agreement on Cooperation in Transport in the Caspian Sea and the emergence of a major transportation and logistical hub there, trade with Iran may continue to grow.

At the same time, the agreement with Iran entails certain political risks. In September 2019, the United States imposed sanctions on the Central Bank Iran and 25 Iranian companies. The United States also demands that its allies and the entire global community accede to these sanctions. Mostly likely, sanctions against Tehran will continue to expand.

Agreement on Trade and Economic Cooperation with China

The Agreement on Trade and Economic Cooperation between the Eurasian Economic Union and the People’s Republic of China was signed on 17 May 2018, and will enter into force in late October 2019. This is not an FTA agreement, but it does define a single format for trade cooperation between the EAEU and China. The agreement covers a broad range of issues, including simplified trade procedures (such as the availability of electronic customs declarations, clearing goods within the shortest possible time), which accords with changes enshrined in the EAEU’s new Customs Code: increasing transparency and working on the mutual recognition of standards, technical regulations and compliance assessment procedures; regulating e-commerce; and cooperation in public procurement.

We can see that EAEU export to China is dominated by natural resources. Consequently, the EAEU as a whole faces the task of both increasing and diversifying the trade turnover. The only way that this can happen is if the production of high value-added products is increased and mechanisms of introducing them to China’s market are found. Connecting the EAEU and China’s “One Belt – One Road” programme should promote economic cooperation.

The agreement exceeds the scope of a mere trade arrangement. It also defines promising areas for developing cooperation, such as agriculture, energy, transportation, industrial cooperation, information and communications infrastructure, technologies and innovations, finance and the environment.

The issue of establishing an FTA with China has been discussed for many years, since 2006, when Beijing first proposed it to SCO states. The EAEU has adopted a cautious stance, since “the principal risk lies in the fact that China’s economic power will make China the main beneficiary of reduced duties; therefore, we want to see how non-preferential agreement will work first.”

The Prospects of Developing the FTA Format with other States

Negotiations are currently are underway on the establishment of FTAs with several states. Serbia will be the next country to sign an FTA agreement with the EAEU (the FTA Agreement was signed on October 25, 2019 – Ed.). Deputy Prime Minister of Serbia and the Minister of Trade, Tourism and Telecommunications, Rasim Ljajić, said that the EAEU–Serbia Free Trade Agreement is scheduled to be signed in Moscow in late October 2019. In May 2019, the Supreme Council of the EAEU issued the mandate to sign the agreement.

Nikishina also commented on negotiations with Egypt, which were launched in 2019 and are nearing the final stage.

Talks with Israel are progressing at a slower pace. The first round of negotiations was held in late 2018. It focused on trade protection measures, the rules for determining the origin of goods, customs cooperation, dispute resolution, technical barriers to trade, sanitary and phytosanitary norms, public procurement and commodity trading issues. The main problem is reconciling the positions of the parties. The political differences with Tehran, which already has an agreement with the Eurasian Union, have not significantly affected the course of the talks.

We can thus see that the Eurasian Union is working diligently to sign FTA agreements with interested countries. Such agreements bolster the EAEU’s positions in the regional and global economy and are conducive to expanding the markets for national economies. However, signing such documents is not the EAEU’s goal as such. The point is that they provide mutual advantages. The experience that the Eurasian Commission has gradually accumulated allows it to articulate the interests of its member states more clearly and neutralize the risks for national manufacturers when signing preferential trade agreements. This practice will continue.