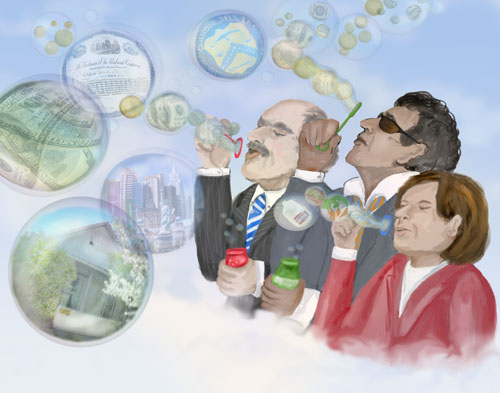 TISA may hobble the ability of governments to maintain stable financial markets.

(3BL Media and Just Means) — The Trans-Pacific Agreement (TPP), Transatlantic Trade and Investment Partnership (TIPP) and Trade in Services Agreement (TISA), will “reshape the global economy,” according to The Guardian. Ongoing negotiations between the U.S., the European Union and 23 other countries on these agreements work hand-in-hand, but according to Forbes, it’s TISA that potentially has a much greater impact because services now account for more than 80 percent of U.S. and EU economies. It’s hard to tell, though, because the negotiations are being conducted in top secrecy. (Thank you, WikiLeaks—without you, we would have no idea of what the world’s governments and corporations have been talking about.) To better understand the consequences of TISA and the recently passed “Fast Track” legislation, I reached out to the American Sustainable Business Council for their perspective.

The ASBC serves the business community and a sustainable economy by advocating for legislation; by providing a platform for policy makers to engage with business professionals; by conducting and commissioning research on sustainability-related issues; and by educating members and external stakeholders how the triple bottom line is good for business. Since 2008, the ASBC has been following the TIPP, TPP and TISA negotiations, offering insights and a call-to-action.

On their website, the ASBC explains that the point of greatest concern in the agreements is the proposal to allow corporations to sue governments in an international tribunal. This grants multinationals the power to protest environmental and labor standards. David Brodwin, Vice President and Co-Founder of ASBC, says ultimately, these negotiations will favor MNCs who are at the negotiation tables with the world’s top government leaders. The potential consequences? Corporate control and weakened regulations for service industries, a.k.a. most of our economy. Brodwin lays out five foreseeable implications of the current negotiations for companies committed to doing business sustainably:

1.) Innovative companies that come up with cleaner, greener, safer ways to do things often depend on rules that require safety hazards to be disclosed (at a minimum) so that consumers can vote with their dollars. For example, a new bank that built its financial model on safe and responsible lending would want the government to require disclosure of true interest rates and fees on all lending documents. TISA could allow unscrupulous lenders to overturn these disclosure requirements.

2.) Governments have a vested interest in locally based economic development because that is more efficient for job creation, and the benefits are more durable and more fairly distributed. Some governments establish contracting preferences to give a slight edge to locally owned and independently operated businesses. TISA could allow non-local vendors to overturn these preferences.

4.) Governments differ in the extent to which confidential data be protected. Under TISA, international communications firms will likely be able to overturn these standards.

5.) Governments are deeply involved in health care services to ensure that their residents have access to affordable care. TISA could limit governments’ abilities to structure national health care systems to meet the needs of their citizens.

Is it just me, or does this seem like the opposite of democracy? With the double wins of marriage equality and saying adios to the confederate flag in South Carolina in the last few weeks, I’ve been feeling very patriotic. In understanding better these negotiations, my patriotism has been adulterated. Where does President Obama stand? Verbally, Obama supports small business, environmental regulation and fair labor standards. I have two words for his verbal support: moot point. Actions speak louder than words, Mr. Obama. In collaboration with the Republican Party, Obama fast tracked the agreements to the Senate. From what we know about the trade negotiations, they have the potential to eliminate incentives for countries that take ownership of their environmental and social externalities; there will be no encouragement for companies to take the “higher road,” as Brodwin puts it.

“The United States could say that if “Country X” also has workplace standards, there will be no tariff on importing goods from Country X into the U.S. But if another country, let’s say, “Country Y,” does not have similar standards, then there would be a 10% tariff on goods from Country Y. A club of sorts could be established—let’s call it the “High Road Club.” All members of the Club pledge to ‘high road’ practices, and then all of them eliminate tariffs on each other’s products. That protects workers and consumers in all the countries that belong to the club and encourages the rest of the world to adopt higher standards. Under TPP and TISA, a club like this would not be allowed,” explains Brodwin.

So what can we do as sustainable business leaders? Support local businesses and get politically involved.

“We can pressure our elected representatives to make sure that the treaty which emerges from all the secret backroom discussions is actually a good one for America as a whole, not just a few big players who dominate the discussion,” says Brodwin.

Read about the important advocacy of the American Sustainable Business Council. Here’s what the ASBC says about the TPP, TIPP and TISA agreements. Put your name on the petition to President Obama, asking him to stick to his word and stand up for small businesses.