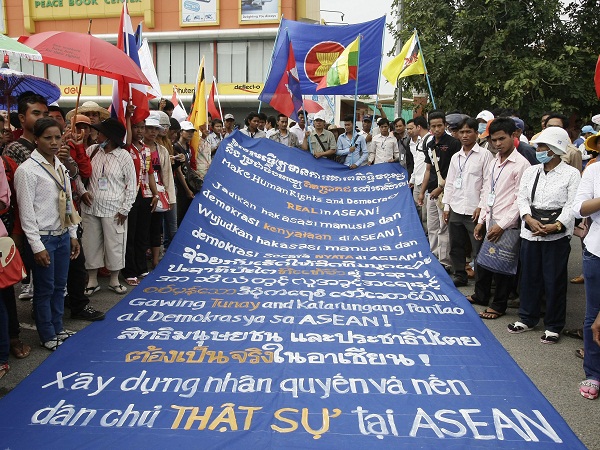 Hun Sen to join Asean leaders in US meeting with Obama

The US has sought in recent years to improve its diplomatic relations with the region, and the talks, to be held at the Sunnylands resort, in Rancho Mirage, will take place at the same venue where Obama met with Chinese President Xi Jingping in 2013.

Hor Namhong added few details about the talks, the first of their kind on US soil, expected in mid-February.

Ou Virak, head of the think tank Future Forum, said the invitation was likely a part of the broader US effort to curb China’s growing influence in Southeast Asia.

“The US is interested in Cambodia on the point that Cambodia can be a tool for China,” he said. “Thus, this worries them, as well as other Asean nations. This is an important point. I hope that Cambodia will adjust its international policies in a way that they maintain balance in the relationship with China and the West during this important visit.”

China’s attempts to claim islands and waters in the South China Sea has stirred concerns among four Asean members who have overlapping claims there: Brunei, Malaysia, the Philippines and Vietnam. That means China will need allies inside Asean, and Cambodia is a prime candidate, Ou Virak said. “China will attract Cambodia to be its tool inside Asean, in a manner that won’t let member countries of the association have solidarity,” he said. “If Asean is divided, it’s easier for China.”

In the past, China has leaned on Myanmar to disrupt Asean unity, he added, but now they are focused on Cambodia. “And if we are China’s pawn, the US can try to use other parties to break off Cambodia and turn it toward its interests. This is risky for Cambodia, which has seen bitterness since the 1970s.”

Meanwhile, Asean members Brunei, Malaysia, Singapore and Vietnam are all part of the 12-nation Trans-Pacific Partnership trade pact, one that Cambodia will one day need to decide whether to join, Ou Virak said.

The pact lowers tariffs on agricultural and industrial products for its members, but could take years to complete. Cambodian economists say it could be raised at the Sunnylands meeting.

​Chab Sothavith, a senior economist at the Cambodia Institute for Cooperation and Security, said Cambodia should seek entry into the TPP, which would help strengthen its ties to the US. Cambodia is already aligned with Russia and China, “all the big powers,” he said. “We are not an enemy to any nation.”

Still, he said, China has undertaken many initiatives in Southeast Asia in general, and Cambodia in particular, including free trade agreements and investment. It has also created an investment bank for development, one that Cambodia is signed on as a member of. “We’ll never forget our friend China,” Chab Sothavith said.

Chab Sothavith said Cambodia has remained neutral in the South China Sea issue, including when it was the chair of Asean, when other analysts say Cambodia used its position to aid China in keeping Asean from unifying on the issue. Cambodia sought to “hold talks in a peaceful manner and not let the dispute worsen, because it could destabilize the region,” he said.

In a meeting with university students on Monday, Foreign Minister Hor Namhong blamed an unnamed global “powerhouse”—likely the US—for creating tension in the region over the South China Sea.