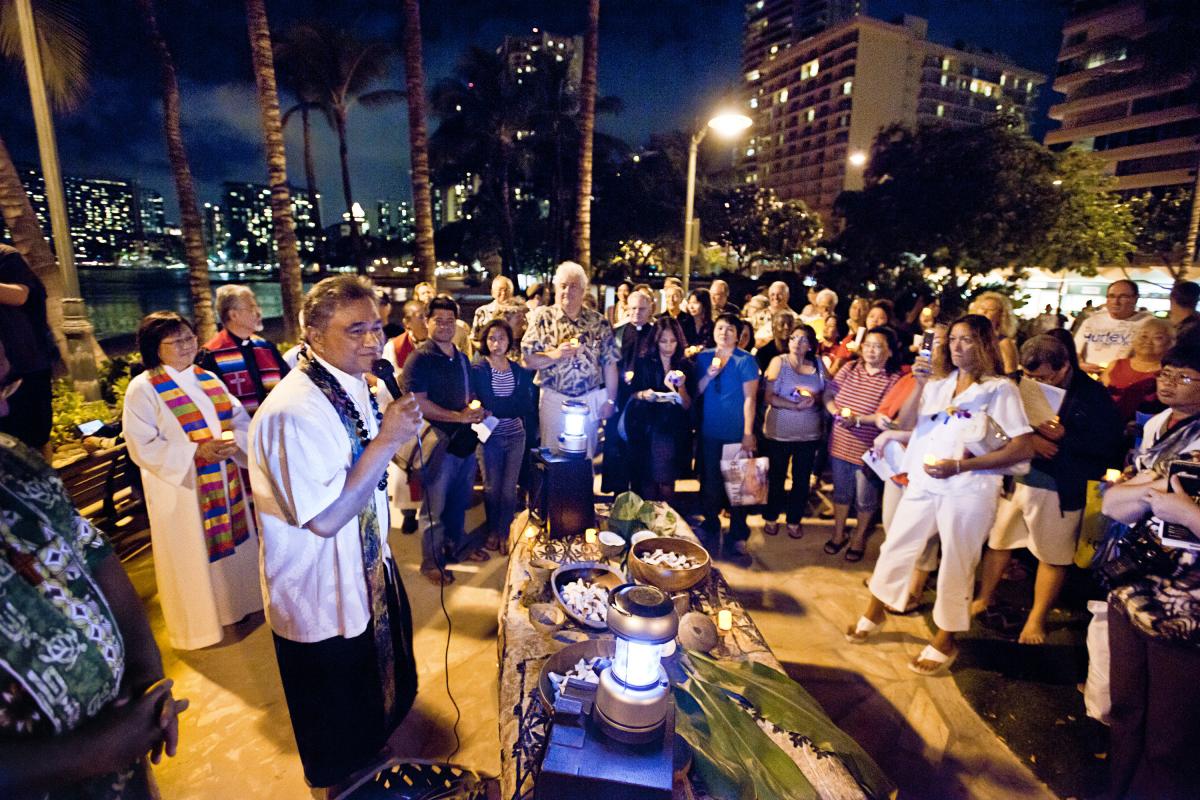 HONOLULU, Nov 08, 2011 (BUSINESS WIRE) — More than 30 clergy from a dozen denominations led hundreds of followers out of St. Augustine’s Catholic Church in Waikiki on Monday night and into the streets of Waikiki as a challenge to APEC, the international trade talks kicking off tomorrow in Honolulu, Hawaii.

Singing, the large crowd first crossed the street to Waikiki Beach and for a prayer and a procession to a hotel recently bought out by Goldman Sachs where the group held a candlelight vigil.

According to Reverend Piula Ala’ilima who led the service, "We have learned from past trade agreements that words on paper, if not written in the spirit of success for all, can lead to the suffering of many. Too many of these international trade conferences are closed to the farmers who need to sell their food, the sick who need to buy medicine they can afford, and workers who deserve rights and safety on the job, and to whole island nations who deserve the dignity and respect of real participation. These are the same concerns we have heard from our Brothers and Sisters in Samoa, Fiji, New Zealand and Korea."

"We are focusing on Goldman Sachs both because of their role in creating this Great Recession and because they are attempting to drive down workers’ standards on our island," according to Rev. Sam Domingo, one of several FACE members banned or arrested while supporting workers at Goldman Sach’s Hyatt hotel earlier this year.

Much of the current unease about these APEC talks is about the Trans-Pacific Partnership. Speaking at Monday’s event, Rev. Sam Domingo explained that "The TPP could potentially tie the hands of our local islands in determining our own public procurement programs."

Monday night’s interfaith service and procession through Waikiki is the second of many Honolulu events challenging the APEC trade talks. Faith Action for Community Equity held an all day conference Saturday, November 5 at the University of Hawaii featuring workshops on APEC and the Trans-Pacific Partnership, as well as workshops on banking and the economy, supporting local agriculture, immigration reform and more.

Monday’s event was sponsored by Faith Action for Community Equity and the Hawaii Interfaith Alliance.