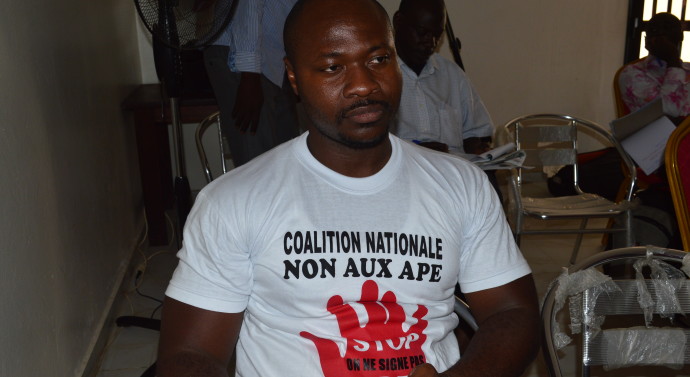 Guy Marius Sagna is the Coordinator of the National Coalition "No to EPAs" in Senegal. He discusses two free trade projects in Africa: Economic Partnership Agreements (EPAs) and the Continental Free Trade Area (CFTA).

Can you explain what Economic Partnership Agreements (EPAs) are?

EPAs are economic agreements that are being negotiated between the European Union (EU) and the Africa Caribbean Pacific (ACP) states. These agreements are diverse because the EU chose to split these countries into sub-regions like East Africa or Southern Africa. In West Africa, the EU’s objective is to export 70% of its goods tariff-free, which will deprive West African states of customs revenues. For instance, Senegal will lose 75 billion CFA Francs per year in the first 20 years of the agreement, and from then on, 240 billion CFA Francs annually. These losses will lower education, health or security budgets, even though states have been facing food, health and security challenges. In addition, these European goods will become far more competitive than they already are, in comparison to local goods. Therefore small and medium-sized enterprises (SMEs) will have to close or lay off some of their employees and farmers will become poorer. Then we can expect that the migration crisis will grow.

Who will benefit from these deals?

The only beneficiary is the EU. Removing tariffs for European goods in West Africa is a hidden subsidy to European corporations. Let’s put the EPAs in context. For the past 10 or 15 years, EU countries have lost market shares in sub-Saharan Africa, and notably France in its former colonies, for the benefit of so-called emerging economies. In fact, the EPA is the solution that the EU has come up with to stop losing influence and regain market shares from the US and emerging countries. And France and Germany are in the driving seat. The milk crisis in the EU is a fairly good representation of what’s going on. In France, this crisis has been characterized by the struggle of the milk producers but also by a general malaise. 600 farmers have committed suicide in France. Hence we must face this European social crisis. We from the No to EPA National Coalition are standing in solidarity with the just and rightful struggle of the European farmers. But we do not want that suicides from France, Germany or Spain become suicides from Benin, Senegal or the Gambia.

What would you say to those who claim that the EPAs will also allow African enterprises to better export to the EU?

Better export? It’s highly unlikely. Currently African countries benefit from the "everything but arms" programme that enables them to export their goods tariff-free. Besides most West African countries are among the least developed countries. Have they become better exporters to the EU because of the “everything but arms”? No, they haven’t! Our countries haven’t been able to become established in the European market because beyond tariff barriers, there are non-tariff barriers that keep our small and medium enterprises (SMEs) and farmers away from the EU. And the EPAs will only make it worse. States won’t even be able to support local companies due to the loss of tariff revenues that I mentioned earlier. That’s why a country like Senegal has nothing to gain in signing the EPA.

The Ivory Coast and Ghana have already signed the interim EPA. What could the consequences be as far as the regional integration of West Africa is concerned?

In reality, EPAs are against African integration. Look at the consequences. Ghana and the Ivory Coast are being blackmailed. Since they’re not least developed countries, the EU can threaten them with taxing their goods when they enter the European market, which would make them less competitive than Asian or South American countries, for example.

Are you saying that EPAs are neo-colonialist deals?

Of course! These deals have been preceded by the IMF and the World Bank’s structural adjustment programmes that imposed liberalising our economies and opening our markets. It’s part of an international labour division scheme that makes our “underdeveloped” countries consumers of goods from other countries whose role is to produce those goods. The EPA reinforces this process, which will impoverish our countries even more.

What about the struggle against EPAs in Senegal and West Africa in general?

Actually there’s been two phases in the struggle against the EPAs. From 2002-2003 to 2007, the opposition against EPAs was dominant. But following a few events in the region, the opponents have become the minority. This is mainly due to the departure of a few presidents who mobilised the state’s resources and the people against the EPAs. Today those in favour of the EPAs are stronger, notably regimes like Macky Sall’s in Senegal that even facilitated the negotiations. Macky Sall and his government have embraced, as far as the EPAs are concerned, the same ugly role as the Senegalese soldiers at the service of the imperialists during colonialism.

Can you manage to mobilise the population?

Fighting EPAs has become very difficult. When the governments were against the EPAs, some heads of companies were leading “No to EPAs” coalitions. In Senegal for instance, the CNP President Baïdy Agne was the leader of the coalition. But since states have changed their policy, no head of company speaks or gets mobilised against the EPAs. They fear retaliation from the state. Much public procurement here is obtained through mutual agreement and companies raising their voice against the deals could be deprived of this procurement. Therefore community activists, unions, and political movements coordinate the mobilisation. And in spite of this very tough context, we’ve observed that in 2016 many more West African citizens sought to be informed and took action against the EPAs. For instance, intellectuals, politicians, MPs have signed petitions against the agreement. And more and more people, whether from cities or the countryside, ask that public events are organised, want to better understand and to get involved further.

The Continental Free Trade Area (CFTA) is another free trade project that is being negotiated within the African Union. What’s its objective?

First of all, the CFTA and the EPAs are linked. The way they are negotiated and implemented is simply anti-democratic. The EU has done at least three impact studies on the EPAs and it hasn’t published any of them so far. It’s because these studies are not in favour of the implementation of EPAs. In the same way, the continental area project should be implemented on 31 December 2017 at the latest, and very few have been informed, whether they’re from Senegal, Benin, Togo, Niger, etc. In addition, the CFTA project goes hand in hand with the EPAs. It aims at creating a continental market through total liberalisation. Implementing the CFTA would be like implementing two EPAs at once, a double liberalisation if you like.

Who will be reaping the benefits of this continental area?

There will be two categories of beneficiaries. First, the African big fish will eat up the small fish, meaning that large corporations will crush small farmers and SMEs. Countries like Senegal, Ghana or South Africa shouldn’t ruin the Gambia, Niger or Lesotho. We’re opposed to the EU for the exact same reasons. It’s impossible to place in the same ring poorer countries and other countries whose GDP is worth many billions. Then the second beneficiary is the EU and other economies because implementing the CFTA would be like opening a second door to transnationals from the EU, the US, China, etc.

Some claim that the continental area could help the African economic integration, by reinforcing the African interior market for instance. What’s your opinion?

Having a common African market is important and we’d be supporting any project that would go towards this direction. The problem is that the CFTA champions values such as competitiveness or competition. This free trade ideology will lead to the same pattern as in the EU or the US and we know what the consequences would be. Instead we think we should promote markets that are based on other values, such as solidarity and complementarity. To simplify, there’s an opposition between two models: that of the ALBA [bilaterals.org’s note: the Bolivarian Alternative for the Americas aims to promote regional integration of Latin America based on values and objectives opposed to imperialism] and the FTAA [bilaterals.org’s note: the Free Trade Area of the Americas was an attempt pushed by the US to expand NAFTA to 34 countries in the Western Hemisphere]. The free trade project supported by the US and Canada meant that large corporations would have squashed the small ones. On the other hand, the ALBA model, backed by Cuba and Venezuela, is an alternative system of integration where economies work hand in hand and complement each other. In this model, a country with a strong agriculture sector shall not crush another country whose agriculture sector is more fragile. Weaker countries will not cease to exist and depend entirely on the stronger market, which would create even more poverty and unemployment. The last point, which also concerns EPAs, is that only free movement of goods is negotiated and the free movement of people is left out. But eventually all that poverty and unemployment induced by free trade will provoke a movement of people in the form of an aggravated migration crisis.