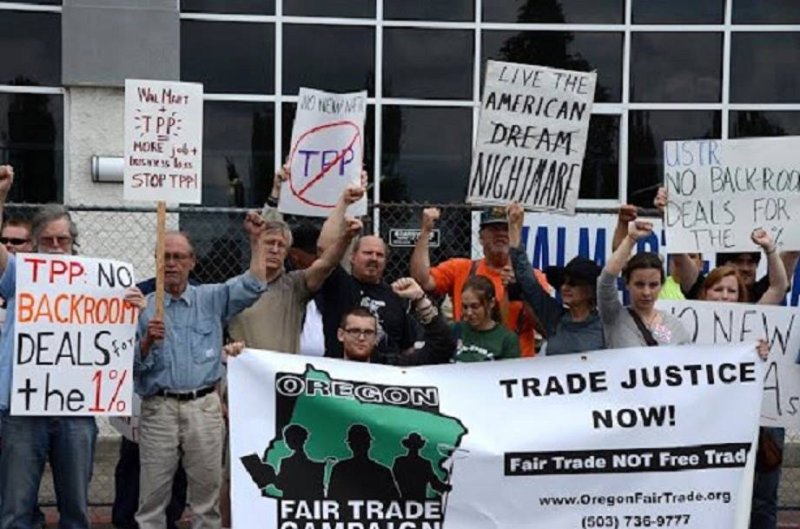 Elizabeth Swager is a National Organizing Director at Citizens Trade Campaign and Julia DeGraw is the Senior Northwest Organizer at Food & Water Watch, both based in Portland, Oregon.

What work do you do as far as trade agreements are concerned?

E.S.: I work for Citizen Trade Campaign (CTC), which is a national coalition of labour unions, environmental organisations, human rights groups, family farmers, consumer rights groups and many other organisations that work together to reform US trade policy. For the past two decades, we’ve been working to stop bad free trade agreements (FTA) such as the North American Free Trade Agreement (NAFTA) and the Trans-Pacific Partnership (TPP) from passing. We had a sizeable win recently with the TPP but the next phase, which is all the more important, is to promote a positive vision of international trade. So not just what it is we’re against but looking at what it is that we need to get from FTAs in order to promote human rights, family wage jobs and environmental standards that are so critical right now to address climate change and so many issues that we see in communities.

J.D.G.: I work with Food and Water Watch and we have a goal of ensuring safe access to food and water for all. That means in America taking on a broken democracy. We have a system that is not working for people or farmers any more. Corporations have become very powerful at controlling the mechanisms in place to regulate them. They control the Food and Drug Administration and they do the same thing with FTAs. Food and Water Watch views certain resources as public goods that need to be maintain as public goods. Our work on trade is to fight very bad trade deals that create a race to the bottom and lower standards for safety for workers and the environment. We also push for a positive vision for better trade policies that will serve people and the planet.

J.D.G: The “America first” stand that he has guarantees he’s not working for fair trade policies but for policies that will lower the bar for other countries and it’s already pretty low. NAFTA was bad for America but it was possibly worse for Mexico. He’s not going to approach trade policies in a way that will raise the bar for the environment or for workers.

E.S.: What the US administration has put out in terms of pitting the US against Mexico is right in line with other racist policies that they’ve been enforcing. And the trade debate should never be about US workers versus workers in Mexico or workers in the rest of the world. It’s about corporations attacking all of us. And it’s our job to stop and call out that scapegoating of other workers and put people back on track on what we need, which is trade policy that benefits workers both here in the US and across borders. We need trade policy that helps family farmers here and in Mexico where NAFTA just wiped out so many family farms.

E.S.: I think you can do it through FTAs and that’s something we advocate for. But there has to be a change in the way these FTAs are negotiated, which is behind closed doors with heavy advice from corporations. They’re the only ones who get to see the text. They have the ears of the negotiators during the negotiating process. If we want to see a fair trade policy, the public has to have a real voice in what’s happening. They need to be able to see what’s being proposed in our name, in real time as the negotiations are happening. That’s the only way we can turn this around. If we don’t know what’s been negotiated, there’s no way that we can get what’s in our interest.

Today trade agreements cover pretty much everything from intellectual property to the environment, etc. Shouldn’t there be more pressure to make international treaties on labour protection or the COP21 agreement on climate, for example, binding and keep trade agreements to trade issues only? What’s your position on that?

J.D.G: I think that when we act like these things are separate, we do ourselves a disservice. Innately trade doesn’t exist in a vacuum. Products that we make, markets that we have are based on the work of real people in the real world with materials that come from the planet. If we cannot approach trade that encapsulates all of that reality, I don’t know that we can end up with a good trade policy. The way that we come up with trade agreements needs to be co-read by all the countries that they apply to and not just the dominant rich white ones.

E.S.: I just want to add that we are in a unique time. We have made a crack in the neoliberal establishment and what gets filled in that crack is up to us. If we’re not going to do something, then it’s going to be corporations and the likes of President Trump filling that crack with their solutions, which is not what people and the planet need. Maybe we need to find a way to negotiate FTAs that is democratic and that all players from all countries come to the table as equal. FTAs should allow for local policies and local solutions to these global problems and for people to be able to be driving these solutions and using their creativity to make it work for them.