This appeal has been translated into Italian and French for Gulagnik. See bottom of the post for links. 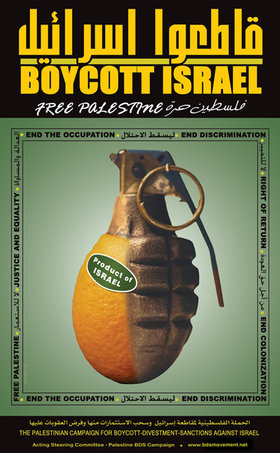 Occupied Palestine, 08 June 2010 — In light of Israel’s massacre of humanitarian relief workers and activists aboard the Freedom Flotilla on 31 May 2010 and its insistence to continue its illegal siege on Gaza, pressuring Israel to comply with its obligations under international law has become of undeniable urgency. Drunk with power and impunity, Israel has ignored recent appeals by the UN Secretary General as well as a near consensus among world governments to end its deadly siege, putting the onus on international civil society to shoulder the moral responsibility of holding Israel accountable to international law and ending its criminal impunity. The Palestinian-led global campaign for Boycott, Divestment and Sanctions (BDS) against Israel has shown the most effective way of achieving this.

Israel’s ongoing blockade of essential food, health, educational and construction supplies is not only immoral; it is a severe form of collective punishment, a war crime that is strictly prohibited under Article 33 of the Fourth Geneva Convention. It is inducing mass poverty, water contamination, environmental collapse, chronic diseases, economic devastation and hundreds of deaths. This three-year old medieval siege against 1.5 million Palestinians in Gaza has been squarely condemned by leading legal experts, including UN Special Rapporteur on Human Rights in the oPt, Prof. Richard Falk, who described it as constituting "slow genocide."

Israel’s widely condemned attacks on the unarmed ships of the Freedom Flotilla, as prominent international law experts agree[1], are in violation of both international maritime law and the UN Convention on the Law of the Sea, which states that "the high seas should be reserved for peaceful purposes." Under article 3 of the Rome Convention for the Suppression of Unlawful Acts against the Safety of Maritime Navigation of 1988, it is an international crime for any person to seize or exercise control over a ship by force, and also a crime to injure or kill any person in the process. As international law scholars have confirmed, there is absolutely no legal justification for Israel’s act of aggression against international civilian ships carrying humanitarian and developmental aid to civilians suffering under occupation and a patently illegal blockade, which has created a man-made and deliberately sustained humanitarian catastrophe. Our response must be commensurate with the horrific suffering resulting from this siege as well as decades-old, multi-tiered systems of Israeli oppression.

The reaction of the international community and people all over the world must understand the latest Israeli atrocities in the context of decades of Israeli impunity, afforded to it by Western governments and, lately, the United Nations. Since the Nakba, Israel’s establishment through the dispossession and ethnic cleansing of a majority of the indigenous Palestinian people, Israel has been allowed to deny the over 6 million refugees from their UN-sanctioned right to return to their homes of origin. In the same period, Israel managed to get away with its system of legalized and institutionalized racial discrimination that conforms to the definition of apartheid under the 1993 International Convention for the Suppression and Punishment of the Crime of Apartheid.[2] For exactly 43 years, Israel has maintained its occupation of the West Bank, including Jerusalem, and Gaza and continued to expand its illegal colonies, committing grave violations of international law and war crimes with immunity. Even the ruling by the International Court of Justice in 2004, which found Israel’s Wall and colonial settlements illegal and directly called on all states to bring about an end to both, was ignored.

Today we see signs that the unconditional support given to Israel over the decades by the international community to protect it from being held accountable, or indeed criticized, is showing cracks. Israel’s Flotilla Massacre has been met with international sanctions including Nicaragua’s suspension of diplomatic relations with Israel[3]; South Africa[4] and Turkey[5] recalling their respective ambassadors from Tel Aviv, as well as a unanimous call in the Turkish parliament to "revise the political, military and economic relations with Israel" and to "seek justice against Israel through national and international legal authorities."[6] Furthermore, Norway’s minister of education and head of the Socialist Left party, Kristin Halvorsen, reconfirmed Norway’s arms ban on Israel and called all other states to "follow the Norwegian position which excludes trading arms with Israel."[7]

International civil society has also responded swiftly and effectively to Israel’s attack on the Flotilla. The Swedish Port Workers Union heeded the BNC appeal[8] by deciding to blockade all cargo to and from Israel from June 15 to 24.[9] The South African trade union federation COSATU called for "greater support for the international boycott, divestment and sanction campaign against Israel," urging "all South Africans to refuse to buy or handle any goods from Israel or have any dealings with Israeli businesses."[10] The South African Transport and Allied Workers’ Union (SATAWU), which pioneered the boycott against Israeli maritime trade in February 2009, refusing to offload a ship in Durban, also heeded the BNC appeal, calling upon its members "not to allow any Israeli ship to dock or unload" and calling upon fellow trade unionists "not to handle them." [11] The South African Municipal Workers Union (SAMWU) unanimously called for making every municipality in South Africa an Apartheid Israel free zone.[12] Britain’s largest union, Unite, unanimously passed a BDS motion to boycott all Israeli companies at its first policy conference in Manchester.[13] Norway’s largest trade union federation, LO, comprising almost one fifth of the entire Norwegian population, called on the State Pension Fund, the third largest in the world, to divest from all Israeli companies.[14] A poll taken after the Flotilla attack showed more than 42% of Norwegians now supporting a comprehensive boycott of Israeli goods.[15]

Leading cultural figures have also had their say. World renowned British writer, Iain Banks, wrote in the Guardian that the best way for international artists, writers and academics to “convince Israel of its moral degradation and ethical isolation” is “simply by having nothing more to do with this outlaw state.”[16] The Klaxons and Gorillaz Sound System cancelled their scheduled concerts in Israel, due to the Flotilla attack,[17] and so did the Pixies.[18] World best-selling writer, the Swedish Henning Mankell, who was on the Freedom Flotilla when attacked, called for South-Africa style global sanctions against Israel in response to its brutality.[19] The best-selling US author, Alice Walker, reminded the world of the Rosa Parks-triggered and Martin Luther King-led boycott of a racist bus company in Montgomery, Alabama during the civil rights movement, calling for wide endorsement of BDS against Israel as a moral duty.[20]

The Palestinian BDS National Committee (BNC) warmly welcomes these brave, principled and effective international positions and actions to end Israel’s siege and criminal impunity. We salute the artists, sportspersons, and trade unions for heeding Palestinian civil society calls for effective solidarity with the Palestinian people in the form of BDS.

Today, we call on:

Other trade unions to endorse BDS by implementing a boycott of Israeli products and divesting their pension funds of all stock in Israeli and international companies profiting from Israel’s occupation and apartheid. We also call on international trade unions to follow the historic example set by the British academic union, UCU, when it decided[22] on May 31st to sever links with Histadrut, even before news of Histadrut’s statement[23] whitewashing Israel’s Flotilla Massacre was publicized. The Palestinian trade union movement, completely represented in the BNC, strongly condemned Histadrut’s latest defense of Israeli war crimes. The Palestine General Federation of Trade Unions (PGFTU), for instance, accused[24] Histadrut of hiding "behind Union to Union cooperation in order to justify brutal assaults against civilians who tried to offer humanitarian assistance to 1.5 million Palestinians, mostly working people, in Gaza." It is worth noting that Histadrut had defended Israel’s war crimes in Gaza during in 2008-09.[25]

Governments to immediately end all collusion with Israel’s unlawful blockade of the Gaza Strip and to pressure Israel to guarantee unrestricted access and freedom of movement of people and products into and out of the Gaza Strip. Governments that uphold international law and human rights are urged to initiate a global arms embargo against Israel and ban on settlement trade.

People of conscience to pressure governments to immediately suspend arms trade with Israel, and to implement trade sanctions, bringing to justice all Israeli officials and military personnel who took the decision and/or implemented this latest massacre as well as earlier war crimes.

Civil society organizations – including faith based groups, universities, unions, women’s associations, student groups, academic associations, etc.– to divest their institutions and pension funds of all investments in Israeli and international companies that are complicit in maintaining Israel’s occupation, apartheid and violation of international law and to boycott Israeli goods. We further call on them to pressure their governments to end free trade agreements (FTAs) with Israel, and implement an immediate arms embargo against it, as was called for previously by Amnesty International after Cast Lead[26].

In particular, we call on:

Turkey, Greece and Ireland, as states whose civilian ships were illegally attacked in international waters by Israel, to pursue all legal channels possible to bring Israelis responsible for this war crime to justice and to suspend all bi-lateral agreements with Israel until it respects international law.

An end to arms trade and military ties: in particular for India, Turkey and Brazil — the three major importers of Israeli arms[27] — to stop all military ties and arms deals with Israel.

The Non-Aligned Movement (NAM) to activate its calls for a ban on colonial settlement goods, denial of entry to settlers and sanctions on companies/entities involved in the Wall and settlements, issued repeatedly at NAM meetings since 2004.[28]

South Africa parliament to join the struggle against Israeli apartheid first by banning Israeli and international companies implicated in the occupation and apartheid from public contracts. It is also urged to lead the initiative on a global arms embargo on Israel and on a gradual ban on Israeli products. Diamond trade with Israel must also gradually come to a halt, by developing polishing workshops in South Africa, rather than allowing Israel to exploit South African raw diamonds to make enormous profits in the polishing process.

Trade Unions participating in the upcoming ITUC conference in Vancouver to endorse BDS and sever links with Histadrut.

In the words of Nelson Mandela, justice for the people of Palestine has become “the greatest moral issue of our time.” Israel’s brutal siege of Gaza is today the most critical and urgent of all Israeli injustices against the Palestinian people. The BNC calls on people of conscience and citizen groups all over the world to intensify BDS campaigns against Israel as the most effective means of ending the siege and holding Israel accountable to international law in the pursuit of a just peace.

[1] Leading international law expert, Prof. Ben Saul, for instance, comments on the Flotilla attack saying: "This latest sad and shocking episode is a reminder of Israel’s recklessness towards the lives of others, its utter disregard for international opinion, and its incivility as an outlaw of the international community." http://www.abc.net.au/unleashed/stories/s2915343.htm

Prominent British lawyers reached the same conclusion in a letter to the Times: http://www.timesonline.co.uk/tol/comment/letters/article7142646.ece

And so did leading Dutch international law professors in a letter to NRC Handelsblad: http://www.iss.nl/News/Karin-Arts-co-authors-letter-about-Israel-for-Dutch-newspaper

[28] “With regard to Member States, the Ministers called upon them to undertake measures, including by means of legislation, collectively, regionally and individually, to prevent any products of the illegal Israeli settlements from entering their markets consistent with the obligations under International Treaties, to decline entry to Israeli settlers and to impose sanctions against companies and entities involved in the construction of the wall and other illegal activities in the Occupied Palestinian Territory, including East Jerusalem”. http://unispal.un.org/UNISPAL.NSF/0/4B3B9C4D7017D42D8525722700520F5F

Italian version of this appeal: http://gulagnik.wordpress.com/2010/06/14/il-massacro-della-flottiglia-di-israele-evidenzia-l%e2%80%99urgenza-di-intensificare-il-bds/

French version of this appeal: http://gulagnik.wordpress.com/2010/06/14/le-massacre-de-la-flottille-de-la-paix-par-israel-souligne-l%e2%80%99urgence-de-l%e2%80%99intensification-de-bds/