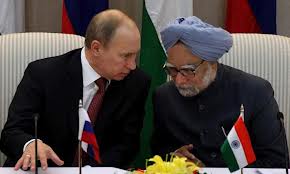 India and the Customs Union of Russia, Kazakhstan and Belarus will hold their first-ever talks on a free trade agreement with the arrival on Tuesday of Victor Khristenko, Chairman of the Board of the Eurasian Economic Commission.

Speaking at a seminar, senior External Affairs Ministry official Ajay Bisaria described economics as the weakest link in India-Russia strategic ties which could be fortified with an FTA or a Comprehensive Economic Cooperation Agreement (CECA).

India and Russia were considering several mechanisms at the intergovernmental level to boost trade and commerce but Mr. Bisaria felt an agreement on free trade would be the most important initiative in this regard.

Mr. Bisaria hoped Mr. Khristenko’s visit would see both sides engaging seriously with the idea of a CECA between India and the Customs Union of Russia, Belarus and Kazakhstan. Speaking at a conference on “Strategic Contours of Indo-Russian Trade and Economic Cooperation,” he wanted Indian traders to utilise the North-South corridor which would cut trans-shipment costs by 40 per cent. India is interested in the Iranian port of Chah-Bahar which will further shorten the distance to Kazakhstan and even Russia, via Semipalatinsk.

An FTA or a CECA has been often discussed at the highest levels — between Prime Minister Manmohan Singh and successive Russian Presidents Dmitry Medvedev and Vladimir Putin — after several initiatives to bring India-Russian trade ties to the take-off level yielded moderate results. However, 2012 was particularly good with the year-on-year growth rate put at 32 per cent.

The ball on Tuesday will be in the Commerce Ministry’s court, said MEA officials, with the entire exercise to be closely supervised by Minister Anand Sharma.

Both sides are following multi-vector policies. India has sealed or is negotiating FTAs or CECAs with several trading blocks and countries. Similarly, the trio of Russia, Belarus and Kazakhstan have also held FTA talks with Vietnam, a close political ally like India.

Both sides are prepared with their initial wish-lists. India wants to encourage pharmaceutical exports. Its previous attempts have floundered on non-tariff barriers such as the Russian insistence on fresh clinical trials because its major ethnic group, the Slav, has a different composition. It also wants an easier visa regime — officials recall the CEO of a top IT company having had to cool his heals at a Moscow airport while the authorities conducted background checks. The CEO preferred to catch a flight to another country.

Russia, Kazakhstan and Belarus too are wary of non-tariff trade barriers and cite several instances of their products being blocked on specious grounds. They also want clarity and predictability in the policy regime. Diplomats of the region disapprovingly recall the Sistema mess when a top Russian gas-oil-telecom conglomerate got caught in the slipstream of the 2G telecom scandal. An initiative by another Russian company to set up an aluminium plant in Orissa was entangled in a dispute with the local partner.

Officials expect some difficulties such as these to be part and parcel of the business environment. Troubles might erupt in the unlikeliest of places such as the Maldives and Bolivia (for Indian companies). But with Russia joining the WTO and the Indian government seriously working on shorter access routes, they feel trade between India and Eurasia would diversify into other areas.