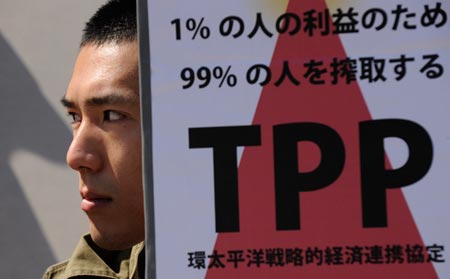 A man protests the TPP in Japan. (Photo/Xinhua)

By Jonathan Soble in Tokyo and Shawn Donnan in London

When Japan joined a dozen other Asia-Pacific countries in talks to form an ultraliberal regional trade zone earlier this year, Shinzo Abe, the prime minister, described the move as a crucial step toward reinvigorating the Japanese economy.

The Trans-Pacific Partnership, he said, would boost growth by improving access to foreign markets for Japanese manufacturers and forcing coddled local industries to become more competitive. In an interview with the Financial Times this month, he reiterated that joining the TPP would be “in Japan’s national interest”.

But Toshio Yamada is not buying it.

“Why should Japan take its own underpants off?” the parliamentarian from rural Toyama prefecture told reporters last week, after a senior Japanese negotiator suggested that Tokyo may have to make concessions over a set of highly protected agricultural products.

Mr Abe had previously called the items, including rice, “sacred territory”, suggesting that they would be exempt from the tariff elimination that is at the heart of the TPP.

His ruling Liberal Democratic party made maintaining agricultural trade barriers a central plank in its platform in parliamentary elections in July, and if Japan gives ground in the talks, Mr Yamada said, “it would be perceived that the government and the LDP lied”.

Mr Yamada is himself a member of the LDP, and his comments – which have been echoed, in less colourful language, by many others in the party – illustrate the internal battle that is raging over the TPP. How it is resolved will have important consequences for the both the trade pact and Mr Abe’s economic agenda.

“Prime Minister Abe has built a strong political base for his administration, and now he needs to exercise leadership and do everything in his power to conclude the TPP talks within the year,” the pro-TPP Nikkei newspaper said in a front-page editorial last week. Sealing a deal by December is the stated goal of several of the TPP’s core countries, including the US, though many observers believe it is unrealistic.

Japan has identified 586 agricultural commodities in its “sacred territory”, in five categories: rice, wheat, dairy, sugar, and beef and pork products. According to calculations by Japanese media, they account for about 7 per cent of traded goods – a percentage considered too high for a blanket exemption under the TPP, whose stated purpose is the near-total elimination of trade barriers.

In a television interview, Nobutaka Machimura, a senior LDP politician and former foreign minister, said the intraparty debate over agriculture might not be resolved in time to allow Japan to commit to an agreement this year. “The LDP won the election by pledging we will keep the tariffs on the five products,” he said. “There will be lots of discussions in parliament and within the party, which might make it difficult for the government to make any decision by year’s end.”

One plan being floated by the LDP would have Japan agree to cut tariffs on several hundred derivative products on its list – processed pork rinds, for instance, rather than pork chops. Akira Amari, the cabinet minister who is overseeing the TPP talks, said the government would stand firmest on rice – Japan’s most heavily protected agricultural product, with import tariffs equal to about 700 per cent.

“The fact that they are having this debate is a really important step forward,” said a foreign official familiar with the TPP talks, who described it as departure from Japan’s past insistence on excluding sensitive products altogether. “This is a different trade negotiation.”

Mr Abe, for his part, may believe his rhetoric on the issue has left him room to manoeuvre. His promise to “protect” the five sacred items does not explicitly define what that means. Farmers and their champions in the LDP have assumed he would secure exemptions that leave trade barriers intact; they will feel betrayed if he does not, but he could offer other, face-saving forms of protection in return, such as increases in direct subsidies.

A similar solution was found in the late 1990s when Japan was negotiating to join the World Trade Organisation. As a condition of membership it had to give up its system of government-mandated rice prices and move to a market-based system, albeit one with huge import barriers. As compensation, it transferred an estimated Y6tn ($61bn) to farmers through direct payments and spending on rural projects.

Doing something similar today would be an expensive solution for Japan’s highly indebted government, but Mr Abe appears determined to secure a TPP deal. “He says it’s the key to his economic reforms, so he can’t back out now,” one person close to him said.