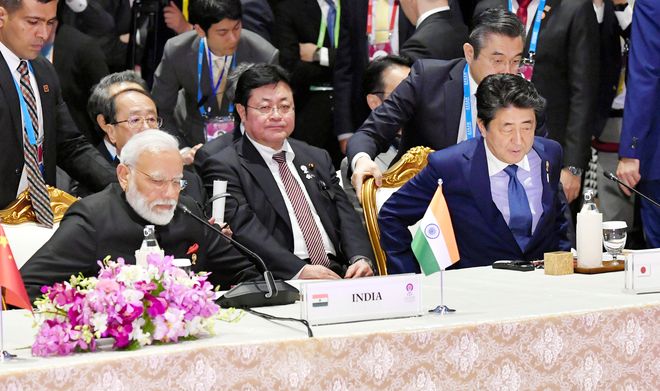 India’s exit from RCEP regional trade talks appeared to leave China and Japan at odds over whether to press ahead with the remaining members, or to try to find a workaround that includes Prime Minister Narendra Modi’s government.

India announced Monday it was withdrawing from the China-backed Regional Comprehensive Economic Partnership, citing the deal’s potential impact on the livelihoods of its most vulnerable citizens. China said that the 15 remaining countries decided to move forward first and India is welcome to join RCEP whenever it’s ready.

Japanese Trade Minister Hiroshi Kajiyama said Tuesday that Tokyo would work toward a deal including India. This would keep the world’s largest democracy within the RCEP framework and be in line with Prime Minister Shinzo Abe’s policy of bolstering ties with India in order to balance Beijing’s growing power.

“Our country wants to play a leading role toward reaching an early agreement between all 16 countries, including India, with the aim of signing it in 2020,” said Kajiyama, who wasn’t present at the latest negotiations in Bangkok, told reporters in Tokyo.

India’s exit from negotiations coincided with the most recent meeting of officials from the so-called Quad: Japan, Australia, the U.S. and India, a security-focused grouping seen as a counter to China that has drawn Beijing’s ire. The group was upgraded to ministerial level in September.

China has sought to accelerate the RCEP deal as it faces slowing growth from a trade war with the U.S. An agreement would further integrate Asia’s economies with China just as President Donald Trump’s administration urges nations in the region to shun Chinese infrastructure loans and 5G telecommunications technology.

A China-led push would not necessarily satisfy the Japanese, who invited India to be a part of the negotiations.

“It’s not desirable to have an agreement that suits China’s purposes,” former Japanese Defense Minister Takeshi Iwaya said in an interview Tuesday. “Even if it takes a long time, it’s important to build an agreement that’s desirable for all the member countries.” Mega Trade Deal

Indonesian Foreign Minister Retno Marsudi said India still had problems with RCEP but all those in the process “will work together to solve these problems in a mutually satisfying way,” according to a Monday statement from the ministry.

Modi decided not to join the deal in order to protect service workers and farmers, an official told reporters in New Delhi on Monday. India had pushed the other 15 nations to address its concern over deficits and open their markets to Indian services and investments, the official said.

RCEP countries are likely to move forward without India, in part because a pact could be concluded more easily and quickly that way, said Juan Sebastian Cortes-Sanchez, a senior trade policy analyst at the Singapore-based Asian Trade Centre research institute. Waiting for Modi’s administration to change its mind could even give his negotiators the ability to “leverage the urgency” to make more demands on other countries eager to conclude the regional trade pact, he said.

“They’re open to dialogue and the possibility of letting India in,” he said, adding there’s a constant uncertainty that Modi’s government is “just never going to commit.”

In the run-up to Association of Southeast Asian Nations meetings in Bangkok, where Asian leaders had hoped to announce an RCEP breakthrough, New Delhi had made last-minute demands amid domestic opposition over worries it would be flooded by cheap goods from China.

“There won’t be any problem for the 15 nations to sign RCEP next year,” Chinese Vice Foreign Minister Le Yucheng told reporters in Bangkok on Monday. “We are taking an open attitude — whenever India is ready, it’s welcome to get on board.”

RCEP countries said in a joint statement on Monday that all participating countries would work to solve outstanding problems “in a mutually satisfactory way.”