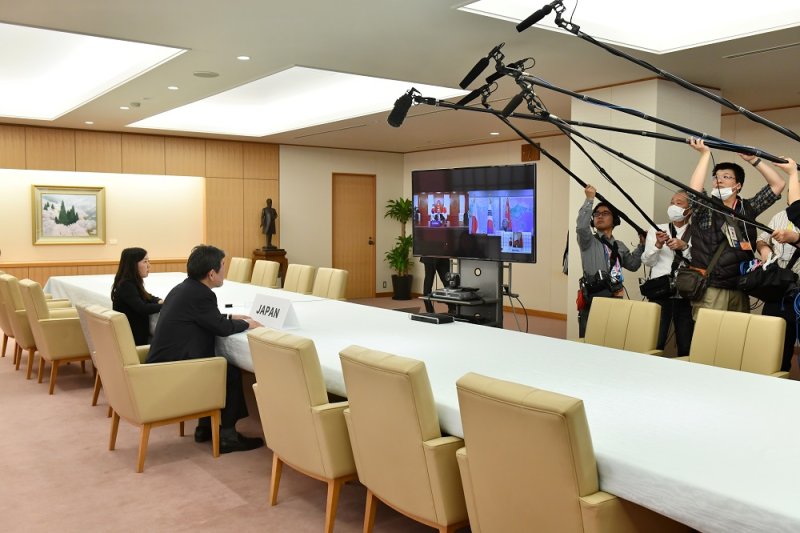 Japan and UK to begin negotiations on free trade agreement

Japan and the United Kingdom will formally begin negotiations Tuesday on a free trade agreement, aiming to clinch a deal by the end of the year when the transition period for the U.K.’s exit from the European Union ends.

The countries will build on an existing Japan-European Union deal, with Tokyo looking to scrap auto tariffs while London has said it wants benefits for its financial services and textile industries.

Foreign Minister Toshimitsu Motegi will kick off the talks in a videoconference with Liz Truss, the British trade secretary.

The U.K. departed from the European Union in January and is in trade negotiations with dozens of countries. It is eager to make deals before the end of the year, after which it will no longer be included in the bloc’s arrangements.

The Japan-European Union free trade agreement entered into force in February last year, removing or lowering tariffs on agricultural products such as wine and cheese from Europe while scrapping the 10 percent tariff on Japanese automobiles in its eighth year and immediately removing those on auto parts.

Trade minister Hiroshi Kajiyama said Tuesday that Japan wants to see the U.K. remove auto tariffs “as quickly as possible.” The countries will set high-level standards on digital commerce and strive to promote trade and investment, he told a news conference.

In a statement Monday, Truss said the agreement would “provide more opportunities for businesses and individuals across every region and nation of the U.K. and help boost our economies following the unprecedented economic challenges posed by coronavirus.”

Uncertainty over the U.K.’s decision to strike out on its own has proved a hurdle to Japanese companies, with Nissan Motor Co. scrapping last year a plan to manufacture new SUV models for the European market at its Sunderland plant.

Major Japanese companies from Sony Corp. and Panasonic Corp. to Mitsubishi UFJ Financial Group Inc. and Nomura Holdings Inc. have moved some of their European operations to other countries such as Germany and the Netherlands.

The U.K. is also looking to join a free trade pact consisting of 11 Pacific nations including Australia, Canada and Mexico that accounted for about 13 percent of the global economy at the time of its signing.

“A trade deal with Japan will also advance the U.K.’s accession to the Comprehensive and Progressive Agreement for Trans-Pacific Partnership, which will improve market access for U.K. businesses across the Asia-Pacific region,” Truss said in the statement.