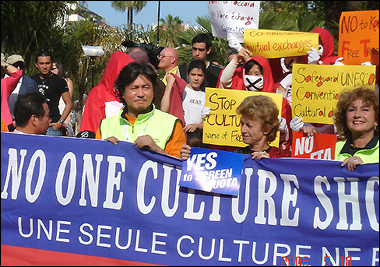 A group from the Korean film industry, including actor Choi Min-sik, center in the front row, and members of the Korean and French Coalitions for Cultural Diversity, stage a silent demonstration to protest the Korean government’s plan to reduce the screen quota system, in front of the Palais du Festivals during the opening of the 59th Cannes Film Festival, Wednesday. /Yonhap

CANNES, France — Films from South Korea may not be as prominently featured in the program of the 59th Cannes Film Festival as in recent years, yet Korean cinema is garnering attention, thanks to the struggle by industry people to defend the screen quota system.

In Cannes, actor Choi Min-sik and directors Yoon Jong-bin and Bong Joon-ho — whose films ``The Unforgiven’’ and ``The Host’’ are the sole Korean entries invited to the festival — protested on three consecutive nights in front of the Palais du Cinema, the festival’s main venue.

They faced the difficult task of diverting attention from star-studded evening screenings to create awareness about the struggle by Korean cinema to keep its identity and independence.

The quota system imposed the screening of domestic films 146 days per year in Korean theatres — the target of American government lobbying for more than ten years. Many believe that the quota system was one of the key factors that yielded the post-1997 resurgence of Korean cinema that in the last few years led to a sweeping over of Hollywood films at the national box office.

Claiming Korean films can now stand on their own legs, Hollywood officials have for years requested a decrease in the quota allotted to Korean films, if not a total demise of the system. Throughout the years, the persistent requests of Hollywood have been supported by the U.S. government, and each time bilateral economic treaties or agreements were discussed the issue was invariably raised.

Reportedly, the screen quota issue even played a major part in the failure of a bilateral investment treaty. However, late last year the negotiation on a free trade agreement between the U.S. and Korea led to a swift change in the Korean government’s stance and to the mid-January announcement of a drastic halving of the mandatory quota — from 146 to 73 days, effective from July 1.

In a press conference held jointly last Friday, the Korean and French Coalitions for Cultural Diversity vehemently voiced their concerns about the current state of affairs in Korean cinema. The president of the French Coalition, Pascal Rogard, pointed at the Korean case as a primary example of the hegemonic cultural policy of the American government, to uphold the primacy of Hollywood products on a global scale.

``Hollywood films account for about 80 percent of the global market, American TV products occupy about 90 percent of worldwide airtime, American music makes about 85 percent of the profits in the music business: such a situation should be regarded as dramatic for the whole of mankind!’’ said executive director of the Korean Coalition Yang Gi-hwan.

``This is my third visit to Cannes. The first two were joyful occasions, as films I was starring in were selected for competition, but today it is different for me,’’ explained Choi in a heartfelt manner, star of the Cannes Grand Prize-winner ``Old Boy.’’ ``The situation is desperate and I feel like an orphan who has been deserted by his own parents.’’

Strongly committed to the cause of the screen quota, Choi took part in a candlelight vigil in front of the Palais, Saturday.

The French Coalition submitted a request for endorsement of the Korean struggle to the Cannes Film Festival Directing Board, whose next assembly is scheduled for Sunday morning.