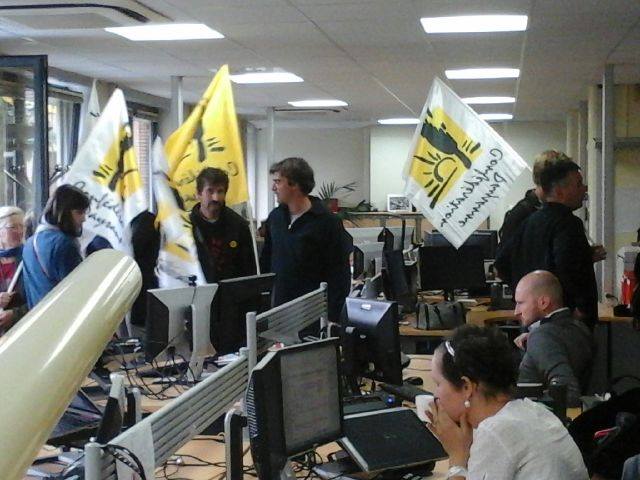 The farmers occupied Cargill’s buildings and the trading floor the whole day, until they got an appointment with the office of France’s Secretary of State for Foreign Trade, Mr. Matthias Fekl.

To denounce the imminent signature of CETA and demand to stop negotiations on TTIP, the Confédération paysanne (2nd largest farmer union in France) occupied yesterday headquarters of Cargill FR, the first food processing multinational in the world.

The hundred activists unfurled a banner of 25mx10m on the front of the head office, with the following message: "Holland, Juncker, Obama: don’t offer farmers and citizens to multinationals, Stop TTIP / CETA". They occupied buildings and the trading floor the whole day, until they get an appointment with the office of Secretary of State for French Foreign Trade, Mr. Matthias Fekl.

Photos of the action

These agreements are a major threat for french, european and north american agriculture and food. Their conclusions would lead to accelerate destruction of human scale farms, the only ones able to guarantee jobs in rural areas, good food and to preserve the environment.

Inevitably they will be replaced by factories (as the 1000 milk cows factory we’re fighting in France), namely their perfect antithesis. Furthermore, these agreements will strengthen multinationals domination, in law and in facts, over the farmers and citizens around the world.

La Confederation paysanne calls for mass rally to block factory farms and free trade agreements to prevent these kind of dynamics that kill alternatives and great projects, especially for food and agriculture.

For your information, 6 unionists (farmers) and 3 activists will be sue before a criminal court october the 28th, in Amiens (north of France) because they’ve participated to civil desobedience actions since one year, to block this industrialization of agriculture. We’ll be thankful if you could send us supports, any kind you could ! (written or video testimonies, donations, etc.) in order to face this event and make it a symbol of resistance. Thank you in advance !
source: Confédération Paysanne
actions | resistance agriculture | farmers | food Canada EU France TTIP
Subscribe to bilaterals.org weekly