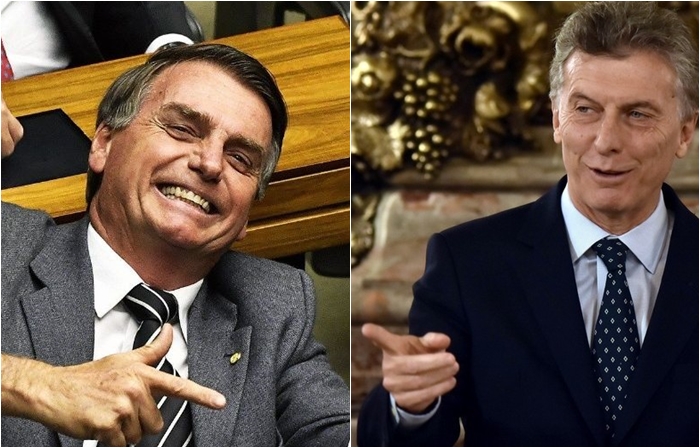 By Patrick Gillespie, Jorgelina Do Rosario, and Samy Adghirni

Two of the world’s most-sheltered economies, Argentina and Brazil, are now aligned to overhaul the main South American trade bloc, potentially unleashing years of pent-up demand but risking a political backlash in the process.

Brazil’s President-elect Jair Bolsonaro has signaled that he wants to reform Mercosur, the 4-nation customs union, to make it more agile and allow members to negotiate bilateral free trade agreements along the lines of what U.S. President Donald Trump is pursuing. Argentina’s government, led by President Mauricio Macri, supports the reform too, according to two senior government sources who asked not to be named.

Mercosur nations, which include Uruguay and Paraguay, failed to strike any significant trade deal since the group was founded nearly three decades ago.

Now, Bolsonaro and Macri are challenged to show voters that market-friendly policies can improve lives by bringing more investment, cheaper imports and new markets for their exports. At the same time, they have constituencies largely supportive of Mercosur’s protective tariffs.

"The price of transition will be steep and bring social and political costs, but ultimately it will be worth the effort," says Benjamin Gedan, head of the Wilson Center’s Argentina Project and former White House National Security Council director for South America in the Obama administration.

A Time for Change

A wave of unified trade rhetoric, a rarity in South America, has surfaced in recent weeks, signaling reforms could commence once Bolsonaro is in office next year.

"Mercosur isn’t a gilded bird cage, but rather a platform for global insertion,” Uruguay’s Deputy Foreign Minister Ariel Bergamino said in a telephone interview. “Maybe Mercosur needs to be updated to reflect the world of today.”

Brazil’s soon-to-be finance minister Paulo Guedes lambasted Mercosur for its practices and said Brazilians "won’t be prisoners" to the bloc’s protectionist ideology. A similar sentiment about the legacy of tariffs is growing among Argentine leaders.

"In Argentina, it hasn’t worked," Argentina’s Central Bank President Guido Sandleris told Bloomberg in a recent interview. "During the previous government there was a process of disengagement with global trade and we’re trying to reverse that."

Weaning the South American bloc off tariffs holds little short-term gain for Bolsonaro, who may lead the reform overhaul. For one, Brazil exports most of its manufactured goods to other Mercosur nations. If new trade deals lowered tariffs on industrial imports from non-Mercosur nations, Brazil would lose customers because its products are lower quality and more expensive, experts say.

"This idea that Brazil doesn’t negotiate [bilateral deals] because it can’t is one of the biggest fallacies in trade policy," said Pedro Motta Veiga, a Senior Fellow at Cebri, a Rio de Janeiro-based foreign affairs think tank. "Brazil is, by far, the most protectionist of the Mercosur countries."

Swiftly yanking the cloak of tariffs off Brazil and Argentina would likely put jobs at risk. They rank 72nd and 81st, respectively, out of 137 countries in the World Economic Forum’s Global Competitiveness Index.

In Argentina, free trade is often associated with unemployment after former President Carlos Menem attempted to open the economy in the 1990s. Macri can’t afford those optics next year as he seeks re-election against a challenging backdrop. Brazilians face near-record high unemployment and industries have powerful lobbies in Congress. EU Negotiations

If Mercosur were to metamorphose, it could raise questions about the future of a trade deal that has been in the works for years between Mercosur and the European Union. Talks with the EU pick up this week in Brussels, but they recently broke down and the long-sought deal isn’t in sight.

A Mercosur resolution signed in 2000 committed each member to negotiate trade pacts as a bloc. It would need to be repealed through a Mercosur executive committee. But changing the resolution or negotiating a waiver shouldn’t be a major obstacle, said Motta Veiga.

Experts warn that the road to free trade fortunes is pocketed with lots of political pain.

"The political barriers in Argentina are high," says Juan Cruz Diaz, director of political consulting firm Cefeidas Group in Buenos Aires. "How much political capital is Bolsonaro willing to spend?"