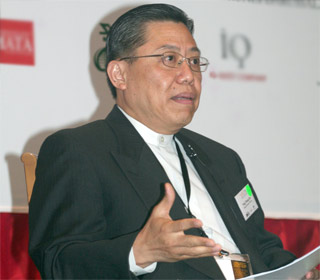 Teng Theng Dar, the head of ABAC, spoke in favour of having APEC champion free and open trade. (Photo: APEC)

Key business leaders of the Asia Pacific region believe it is now time for APEC to take more concrete actions towards establishing a Free Trade Area of the Asia Pacific (FTAAP) in view of the financial crisis and the stalled Doha Round negotiations.

The call comes from the APEC Business Advisory Council (ABAC), which met on Thursday in the central province of Da Nang to finalise their recommendations to APEC Leaders prior to their dialogue in the November APEC Economic Leaders Meeting.

ABAC members were wary about signs of the economic recovery and urged Leaders to take steps to ensure that this is fomented. They believe that this can be done if economies resist protectionism, promote global demand rather than just domestic and that they take the opportunity to undertake economic reforms. And that setting a timeframe for the establishment of a FTAAP would be a testament to APEC’s commitment to accelerate the integration of their economies.

"We believe that APEC is in a position to be the champion of free and open trade. Our vision of a FTAAP would not just cover trade but encompass services, investments and behind-the-border issues of concern to business. We see it as an instrument for bringing about inclusive growth where no one is left behind." said Teng Theng Dar, the ABAC Chair of 2009.

ABAC also believes the successful conclusion of the Doha Round no later than next year will stimulate global trade and investments and address persisting protectionism.

With an eye to the upcoming negotiations in Copenhagen in December for an agreement on climate change, ABAC called on the Leaders to push for an agreement that provides business with a predictable and stable environment in which they operate.