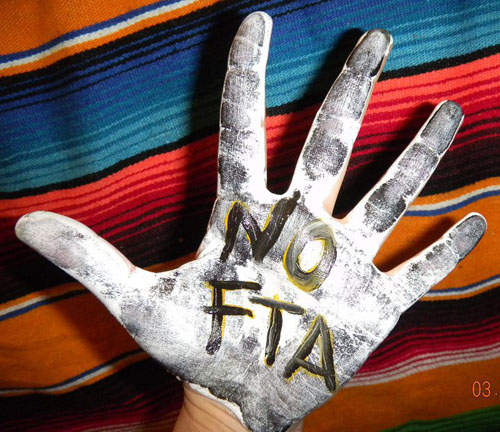 “Like their predecessor, the three pending FTAs with South Korea, Colombia and Panama threaten to create the same kind of damage – only more.”

The campaign’s focus is to educate the public on the substantial shortcomings of the pending free trade agreements (FTAs) and the damage they each stand to deliver on the U.S.

A new IAM infographic details NAFTA’s failed trade policies. The 1994 law is the blueprint for the pending FTAs.

“NAFTA created the trend of corporations shifting production to countries where wages are low, worker rights nearly nonexistent and little regard is given to the environment,” said Buffenbarger. “Like their predecessor, the three pending FTAs with South Korea, Colombia and Panama threaten to create the same kind of damage – only more.

“These pending trade deals are anything but free. Passage will most certainly come at a price – a high price – as we have seen over the last decade. Congress must take the lead in reforming the United States’ failed trade policies before moving forward with any new free trade agreements.”

The IAM is among the nation’s largest industrial trade unions, representing nearly 700,000 active and retired members under more than 5,000 contracts in aerospace, manufacturing, transportation, shipbuilding and defense-related industries. For more information, visit www.goiam.org.