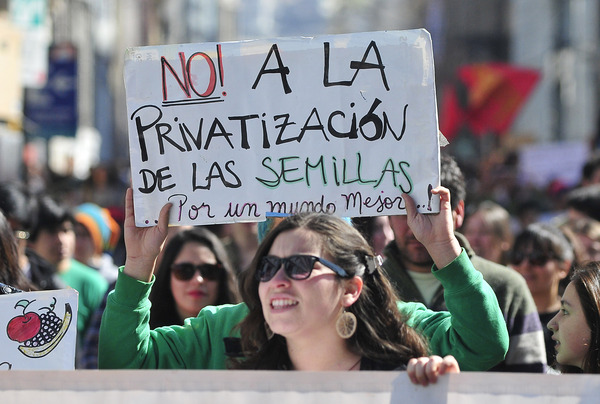 Since 2001, GRAIN has been tracking how so-called free trade agreements (FTAs), negotiated largely in secret, outside the World Trade Organisation (WTO) are being used to go beyond existing international standards on the patenting of life forms. In this report, we provide an update on the FTAs that are legalising corporate theft and threatening farmers’ ability to save, produce and exchange seeds around the world.

Signed in 1994, the WTO agreement on Trade-Related Aspects of Intellectual Property Rights (TRIPS) was the first treaty to impose global standards on intellectual property or legal ownership of plants, animals and microorganisms, bolstered by an enforcement mechanism. Representatives of the US seed and biotech industry brought the issue into the trade talks. Their goal? To ensure that companies like Monsanto, Dow and Pioneer, which spend money on plant breeding to bring new seeds to market, can recoup their investment and make a profit by preventing farmers from re-using those seeds—obligating them to purchase seeds from corporations year after year.

The patenting of life has been hotly contested for decades. For farmers, it makes seeds and livestock more expensive and takes away their right to freely reproduce them. It also reduces life and culture to a commodity that corporations can own and control. While the WTO agreement allowed countries to exclude plants and animals other than microorganisms from their patent laws, it required that they provide some form of intellectual property protection over plant varieties—the seeds that farmers sow—without specifying how to do that. According to industry representatives who helped draft the text, the US corporations got 95 per cent of what they wanted from TRIPS. [1]

FTAs negotiated outside the WTO go even further and help US and European corporations get what they weren’t able to achieve under TRIPS. These deals often require countries to: 1) allow companies to take out patents on plants and animals, 2) adopt the rules of the International Union for the Protection of New Plant Varieties (UPOV) which provide patent-like rights for plant breeders, and 3) join the Budapest Treaty on the recognition of deposits of micro-organisms for the purpose of patent protection. These measures give monopoly powers to agribusiness at the expense of small and indigenous farming communities. For example, UPOV and patent laws generally make it illegal for farmers to save, exchange or modify seeds from so-called protected plant varieties. This is a tremendous injustice, since farmers and indigenous peoples are the original source of these seeds. Corporations take seeds from farmers’ fields, tinker with them and then claim property rights over them as “new” varieties.

What’s more, corporate varieties, promoted as more “modern” than traditional seeds, end up replacing the diversity in farmers’ fields. This genetic uniformity makes the world’s food supply extremely vulnerable, especially in the context of ever-increasing climate chaos. The main countries pushing these measures through bilateral and regional trade deals are Australia, Europe, Japan and the US—with Europe and the US being by far the most aggressive. This is logical, because they house the world’s top seed corporations. US firms alone account for more than 51 per cent of commercial seed sales around the world. [2] Washington promotes the hardest line: patenting when and where they can get it, UPOV as the backup option. The European Union, the European Free Trade Association, Australia and Japan are pushing countries to join UPOV. As a result, our list (see Annexe 1) of who is being forced to join UPOV or allow patents on life as part of a trade deal outside the WTO is growing.

A slew of bilateral and regional trade and investment deals have been signed in the last year, and a number of others are currently being negotiated.

The EU-Canada Comprehensive Economic Trade Agreement (CETA) was signed in September 2015 and currently needs to be ratified by the Canadian and European parliaments. The final version of CETA ultimately does not change the level of rights for seed companies in Canada or the EU, but it does give them more powerful tools to enforce their rights against farmers through seizures and injunctions based on mere suspicion of infringement, including seed saving. Worried about increased restrictions on farm-saved seeds, groups on both sides of the Atlantic, including Canada’s National Farmers Union and the European members of La Vía Campesina, are fighting hard against the ratification of CETA. [3]

Over the last year, the European Union has managed to initial or sign “interim” free trade deals with most African countries. As of now, these new Economic Partnership Agreements (EPAs) do not accomplish what the European seed companies want, i.e. mandatory compliance with UPOV 1991. But they do commit all signatories to a “rendezvous” clause stating that they will meet again in the near future to hammer out standards on intellectual property, which are bound to include the privatisation of seeds.

The US government, in the meantime, is regularly pushing its trade partners to live up to their intellectual property commitments. In its latest Special 301 report—a report prepared annually by the Office of the United States Trade Representative (USTR) under Section 301 of the Trade Act of 1974—the USTR criticises Chile and Colombia for failing to adopt UPOV 1991 as they agreed to do under their 2003 and 2006 bilateral trade deals with Washington. [4]

As for the Transatlantic Trade and Investment Partnership (TTIP) between the US and the EU, the public does not have access to the negotiating text and there have been no leaks of the intellectual property chapter for civil society to scrutinise.

TPP and RCEP are the two biggest threats

Currently, the two biggest threats to small-scale farmers’ control over their seeds are the Trans-Pacific Partnership (TPP) and the Regional Comprehensive Economic Partnership (RCEP).

The TPP was signed in February 2016 by 12 countries: Australia, Brunei, Canada, Chile, Japan, Malaysia, Mexico, New Zealand, Peru, Singapore, the US and Vietnam. The TPP states that all signatories must join UPOV 1991. This means Brunei, Chile, Malaysia, Mexico and New Zealand will have to change their current laws. [5] The changes will clamp down on farmers’ ability to save seed from protected varieties; expand breeders’ rights to all species; and extend corporate control to similar varieties as well as to the harvest. Even if legislators in TPP member countries decide to allow farmers to save seed from corporate-controlled varieties, farmers will now have to pay for this “privilege” year after year.

The TPP also requires all members to allow patents on inventions “derived from plants”. What this means is not clear—and this vagueness is surely deliberate. [6] At the very least it would seem to mean that plant genes and cell cultures, and all products derived from them including plants, shall be patentable in all TPP countries. The US biotech and seed industry believe that this opens the door to the patenting of plants more generally. [7] No wonder, then, that the USTR calls TPP the “greatest tool” yet for imposing higher intellectual property standards not only in Asia, but globally. [8]

In Malaysia, organisations like the Consumers Association of Penang and members of the National Human Rights Society are urging the government to stop these changes from going through. [9] These groups do not want the country’s Plant Variety Protection (PVP) law, which protects farmers’ rights to reproduce seed, to be touched. In Chile, the further privatisation of seeds under TPP is a major concern among social movements that are fighting the agreement’s ratification. Over the past several years, students, farmers and consumers have successfully prevented the senate from adopting what they call a “Monsanto Law” that would require Chile to join UPOV 1991—which the TPP would make obligatory. A number of national campaigns are currently focused on getting parliaments to reject ratification of the TPP. [10]

Farmers in Thailand and the Philippines are also concerned about the prospect of having to give greater control over local seed systems to transnational agrochemical corporations like Monsanto. The governments of these two countries have expressed a strong interest in joining the TPP, which would mean joining UPOV. Like Malaysia, both countries have PVP laws that currently provide greater protections than UPOV 1991 to farmers’ rights to exchange and sell seeds. In Thailand, farmers, scientists, former government officials and human rights advocates having been denouncing the implications of TPP for seeds, including higher prices. According to the civil society group BioThai and the National Farmers Council, seed prices in Thailand would go up 100 to 600 per cent if the country joined UPOV. [11] The Philippines peasant movement KMP rightly describes the policy changes TPP would usher in—not only for seeds, but also land and other resources—as “the end of the world as we know it”. [12]

In addition to Thailand and the Philippines, the governments of South Korea, Taiwan, Colombia and Indonesia are also trying to join the TPP. A host of other countries, from Sri Lanka to Argentina, are also reportedly considering joining. In Latin America, many view the new neoliberal “Pacific Alliance” as a springboard to integration with TPP. [13] If ratified, the TPP could go very far indeed in strengthening corporations’ control over the seed and food supply.

As the fight against the TPP rages on, a new fight is opening up against RCEP, a newer mega-regional trade deal between the Association of Southeast Asia Nations and six of its trading partners: India, China, Korea, Japan, Australia and New Zealand. RCEP is bigger than the TPP in terms of how many people it will affect. And because it includes several TPP signatories, we expect that they will push to harmonise RCEP with the TPP, at least on certain issues like seed patenting. [14] While the negotiating texts are being kept secret, the latest leaks show that Korea and Japan are pushing to make RCEP require all member countries join UPOV 1991. [15] This means Asian farmers and social movements must struggle on two fronts: the TPP and RCEP.

Where do things stand now?

Two tables are included as annexes to this report. Annexe 1 provides evidence of what these trade deals impose on countries in terms of the patenting of life forms. Clearly, the pressure to establish new powers for the seed and biotechnology industry comes mainly from a handful of governments (US, Europe, Japan) for a handful of beneficiaries (the increasingly concentrated corporations based in these countries). The table in Annexe 2 provides a checklist indicating where countries are in terms of joining various treaties related to seeds. [16] While the corporate agenda is clearly gaining ground, it is not too late to stop a number of these mega-deals—CETA, TPP, RCEP and the final EPAs—before the damage is done.

Download Annexe 1: Trade agreements privatising biodiversity outside the WTO (as of June 2016)

[5] Chile, Mexico and New Zealand are members of an earlier version of UPOV (1978) that is not as anti-farmer. Malaysia is not a member of UPOV. Brunei doesn’t even have a plant variety protection law.

[13] The Pacific Alliance is a trade bloc composed of Chile, Colombia, Mexico and Peru, with Costa Rica and Panama in the process of becoming members. Argentina is the latest official observer.