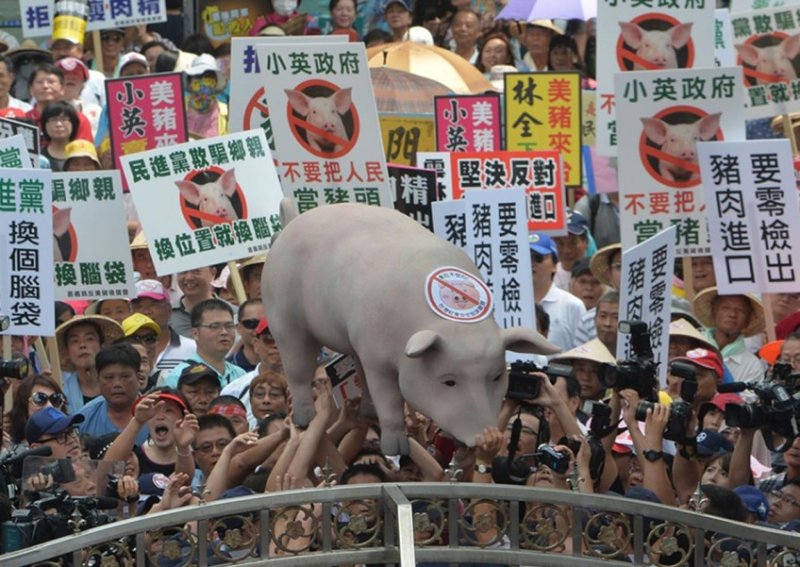 The protesters denounced the central government for using agriculture as a pawn in exchange for support to start negotiations on a bilateral trade agreement with the United States.

They called for the government to withdraw the policy and threatened to hold a large-scale protest in Taipei if the government failed to meet their demand.

Yunlin County Magistrate Chang Li-shan (張麗善) of the opposition Kuomintang said that even if the government sticks to the policy, her county will still not allow any traces of ractopamine in any pork or related products produced or sold in Yunlin based on its food safety regulations.

Lin Ming-yen (林明彥), deputy director of the Yunlin County Pig Farmers Association said the move came as a surprise and was not acceptable to many hog farmers.

The government has pledged a NT$10 billion package of subsidies to support pig farmers since President Tsai Ing-wen (蔡英文) announced on Friday the lifting of the ractopamine ban for pork to eliminate what the United States has considered as an impediment to trade between the two sides.

Ractopamine is a beta-agonist given to pigs late in their maturation process before slaughter to increase leanness and reduce feed consumption, allowing hog farmers to fetch higher prices for the meat of their hogs.

It has created more adverse events in pigs in the United States than any other animal drug, according to the Humane Society of the United States, and raised potential human health concerns as well.

It is banned for use in Taiwan, the European Union and China, but government officials have insisted it will be safe because maximum residue levels (MRL) for ractopamine in pork will be set based on standards approved by the Codex Alimentarius Commission in July 2012.

Council of Agriculture (COA) chief Chen Chi-chung (陳吉仲), one of those who have vouched for the safety of the veterinary drug, responded to the local hog farmers’ concerns Monday by saying that even if the government lifts the ban, the volume of imports is likely to be limited.

Since Taiwan opened its doors to pork imports in 2002 when Taiwan became a World Trade Organization member, imported pork has accounted for less than 10 percent of total pork consumption volume, with U.S. pork making up a mere 1.23 percent of the total, the COA head said.

Moreover, the high sales price of U.S. pork has made it less competitive in Taiwan, Chen said.

Yet despite the cheap Canadian pork, domestic pork has retained a market share of more than 90 percent, showing Taiwanese consumers’ trust in the quality of domestic pork.