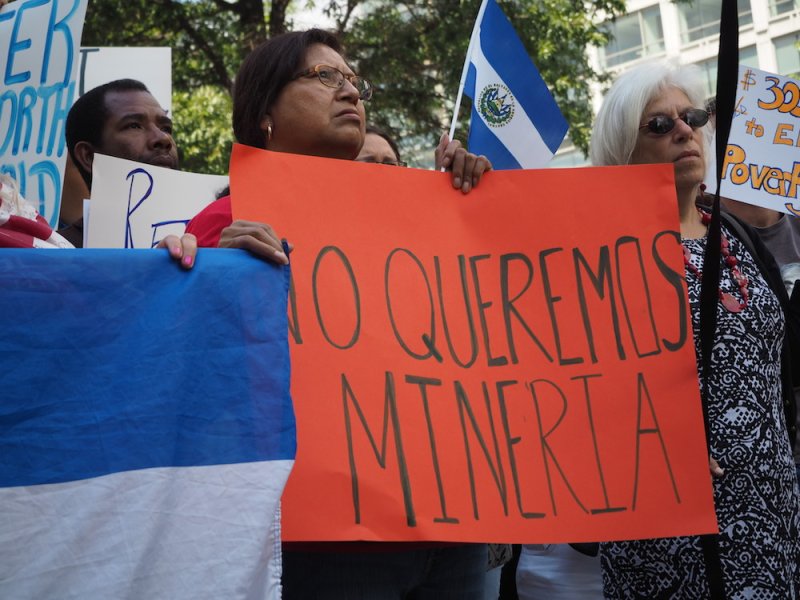 Despite a deadline from the lawsuit passing, the company owes El Salvador US$8 million.

Over 280 organizations from around the world sent an open letter to Canadian-Australian mining giant OceanaGold on Tuesday, demanding that the company adhere to an earlier ruling by a World Bank body that ordered the company to pay the government of El Salvador US$8 million after a years-long legal battle.

OceanaGold, formerly Pacific Rim, was given 120 days to either to pay the US$8 million fine or to submit a plea to have the fine overturned, a deadline which ran out last week.

In October, the International Center for Settlement of Investment Disputes, ICSID, which handles investor-state disputes, rejected a claim from the company that it had lost profits after the Salvadoran government refused to grant a concession for the El Dorado gold mine in San Isidro, Cabañas.

“OceanaGold has to accept the ICSID decision and immediately pay the US$8 million that it owes to El Salvador for legal expenses and expenses,” said Anna Backmann from the German group Christian Initiative Romero.

Other organizations that demanded that the company pay up included local industry, environmental and church groups in El Salvador and from around Latin America. The International Federation of Trade Unions, and groups from the U.S., Canada, Australia and the Philippines also threw their support behind El Salvador. This is the long-running legal battle against the company, which is still aiming to operate in the country despite the controversy.

In 2007, El Salvador denied a permit to OceanaGold due to concerns the mine would not adhere to national standards regulating the industry after the company failed to submit a feasibility study and Environmental Impact Assessment. The government was particularly concerned about water pollution and scarcity in the country, which has been described as the most water-stressed nation in Central America.

The company then took El Salvador to the ICSID in 2009 over what it argued was an infringement on its future profits and attempted to increase the lawsuit against the country to US$301 million — equivalent to three years of El Salvador’s public spending on health, education and public security combined. In total, the tiny Central America country has paid more than US$13 million in legal costs and fees.

The ICSID ruling against the company came as a surprise because the tribunal has previously been criticized as a “kangaroo court” favoring the interests of corporations over states and Indigenous communities and environmental groups.