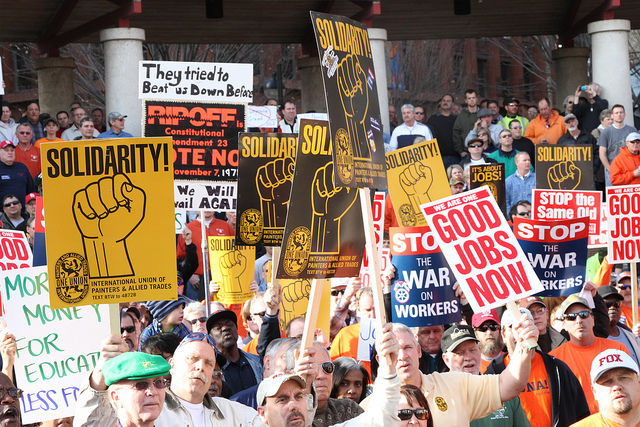 Polling and congressional trade agreement voting records over the past two decades show a steady erosion of what had been bipartisan support for trade agreements.1 Polls show the U.S. public supports the concept of trade expansion, but opposes the status quo trade model. The actual results of trade pacts since the controversial North American Free Trade Agreement (NAFTA) have fueled this trend.

Over 21 years, a series of trade agreements not only have failed to meet their corporate and political backers’ glowing promises of job creation, but instead have contributed to unprecedented and unsustainable trade deficits, the net loss of nearly 5 million U.S. manufacturing jobs and more than 55,000 factories, the offshoring of higher-wage service sector jobs, flat median wages despite significant productivity gains and the worst U.S. income inequality in the last century. Even for U.S. agriculture, a sector that consistently has been promised gains from trade pacts, U.S. food exports have stagnated while U.S. food imports have surged under NAFTA-style deals. Given that the Trans-Pacific Partnership (TPP) pact now under negotiation replicates and expands on the same model, opposition in Congress and among the public is deep and broad.

The United States has a $178 billion goods trade deficit with its 20 free trade agreement (FTA) partners. The job-displacing U.S. trade deficit with FTA partners has surged 427 percent since the pacts took effect, as imports have ballooned and exports to FTA partners actually have lagged behind exports to the rest of the world. Even eliminating trade in fossil fuels, the United States has a more than $92 billion trade deficit with its NAFTA partners alone. In contrast, the United States had a small surplus with Mexico and a $30 billion deficit with Canada before NAFTA. A 2011 study found that the ballooning trade deficit with Mexico alone under NAFTA resulted in the net loss of about 700,000 U.S. jobs, and more than 850,000 specific U.S. jobs have been certified as NAFTA casualties under just one narrow U.S. Department of Labor program called Trade Adjustment Assistance (TAA). The U.S. trade deficit with China has grown from $112 billion in 2001, when China joined the World Trade Organization (WTO) with U.S. congressional approval, to $350 billion today, spurring an estimated 3.2 million U.S. job losses. U.S. manufacturing workers who lose jobs to trade and find reemployment are typically forced to take pay cuts. Three of every five displaced manufacturing workers who were rehired in 2014 took home smaller paychecks, and one in three lost more than 20 percent, according to U.S. Department of Labor data.

Economists across the political spectrum agree that trade flows during the era of FTAs have contributed to rising U.S. income inequality, from Nobel laureate Paul Krugman to International Monetary Fund economists. The only debate is the extent of the blame to be placed on trade. Even the pro-NAFTA Peterson Institute for International Economics has estimated that 39 percent of observed growth in U.S. wage inequality is attributable to trade trends.

Under the most recent major FTA – a 2012 deal with Korea that literally served as the U.S. opening offer for the TPP negotiations – the U.S. trade deficit with Korea ballooned 90 percent in just the first three years.25 That equates to the loss of another 90,000-plus U.S. jobs, counting both exports and imports, according to the ratio the Obama administration used to claim the pact would create jobs. The trade deficit surge in the FTA’s first three years was driven by a 7 percent ($3 billion) decline in U.S. goods exports to Korea and an 18 percent ($10.6 billion) increase in goods imports from Korea. Despite promises that small businesses would be major winners under such deals, small U.S. firms have endured an even steeper drop in exports to Korea than large firms under the Korea FTA. The Obama administration has incited even more congressional opposition by trying to dissemble these disastrous outcomes with cooked data.

In the face of the relentless evidence that our status quo trade agreement model is not working, the Obama administration has doubled down on the old model with the TPP. But the push for more of the same trade policy has hit a wall of opposition from the largest, most diverse coalition to ever oppose a U.S. trade deal, fueled by the two-decade legacy of the TPP’s predecessor pacts.