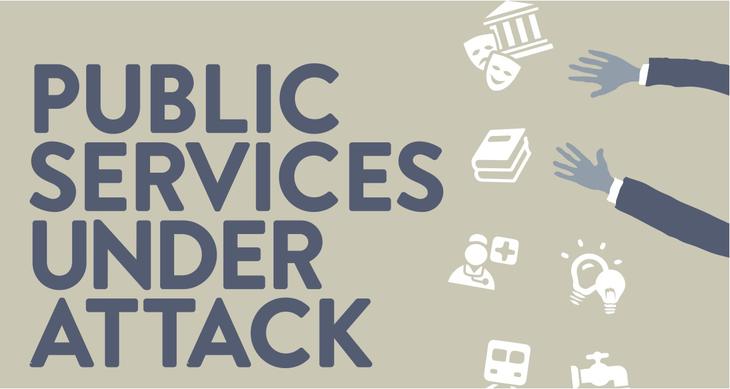 Public services under attack through TTIP and CETA

Public services in the European Union (EU) are under threat from international trade negotiations that endanger governments’ ability to regulate and citizens’ rights to access basic services like water, health, and energy, for the sake of corporate profits. The EU’s CETA (Comprehensive Economic and Trade Agreement) agreement with Canada, the ratification of which could begin in 2016, and the TTIP (Transatlantic Trade and Investment Partnership) treaty under negotiation with the United States are the latest culmination in such efforts. In a worst case scenario, they could lock in public services into a commercialisation from which they will not recover – no matter how damaging to welfare the results may be.

A new report released today by an international group of NGOs and trade unions ("Public services under attack") sheds some light on the secretive collusion between big business and trade negotiators in the making of the EU’s international trade deals. It shows the aggressive agenda of services corporations with regards to TTIP and CETA, pushing for far-reaching market opening in areas such as health, cultural and postal services, and water, which would allow them to enter and dominate the markets. And it shows how those in charge of EU trade negotiations are rolling out the red carpet for the services industry, with both the consolidated CETA agreement published in September 2014, as well as drafts of TTIP chapters and internal negotiation documents that reflect the wishlists of corporate lobbyists.

Key findings of the report :

1. TTIP and CETA show clear hallmarks of being influenced by the same corporate lobby groups working in the area of services that have been built over the past decades during previous trade talks, such as the EU’s most powerful corporate lobby group BusinessEurope and the European Services Forum, a lobby outfit banding together business associations as well as major companies such as British Telecommunications and Deutsche Bank.

3. The business lobby has achieved a huge success as CETA is set to become the first EU agreement with the ‘negative list’ approach for services commitments. This means that all services are subject to liberalisation unless an explicit exception is made. It marks a radical departure from the positive lists used so far in EU trade deals which contain only those services which governments have agreed to liberalise, leaving other sectors unaffected. The negative list approach dramatically expands the scope of a trade agreement as governments make commitments in areas they might not even be aware of, such as new services emerging in the future. The same could happen in TTIP where the Commission is pressuring EU member states to accept the same, risky approach, meeting the demands of the business lobby.

4. Big business has successfully lobbied against the exemption of public services from CETA and TTIP as both agreements apply to virtually all services. A very limited general exemption only exists for services “supplied in the exercise of governmental authority”. But to qualify for this exemption, a service has to be carried out “neither on a commercial basis nor in competition with one or more economic operators”. Yet nowadays, in virtually all traditional public sectors, private companies exist alongside public suppliers – often resulting in fierce competition between the two. This effectively limits the governmental authority exemption to a few core sovereign functions such as law enforcement, the judiciary, or the services of a central bank. Similar problems apply to the so-called ‘public utilities’ exemption, which only reserves EU member states’ right to subject certain services to public monopolies or to exclusive rights : it contains so many loopholes that it cannot award adequate protection for public services either.

5. Probably the biggest threat to public services comes from the far-reaching investment protection provisions enshrined in CETA and also foreseen for TTIP. Under a system called investor-state dispute settlement (ISDS), thousands of US and Canadian cor-porations (as well as EU-headquartered multinationals structuring their investments through subsidiaries on the other side of the Atlantic) could sue the EU and its member states over regulatory changes in the services sector diminishing corporate profits, potentially leading to multi-billion euro payouts in compensation. Policies regulating public services – from capping the price for water to reversed privatisations – have already been targets of ISDS claims.

6. The different reservations and exemptions in CETA and TTIP are inadequate to effectively protect the public sector and democratic decision-making over how to organise it. This is particularly true as the exceptions generally do not apply to the most dangerous investment protection standards and ISDS, making regulations in sensitive public service sectors such as education, water, health, social welfare, and pensions prone to all kinds of investor attacks.

7. The European Commission follows industry demands to lock in present and future liberalisations and privatisations of public services, for instance, via the dangerous ‘standstill’ and ‘ratchet’ mechanisms – even when past decisions have turned out as failures. This could threaten the growing trend of remunicipalisation of water services (in France, Germany, Italy, Spain, Sweden, and Hungary), energy grids (in Germany and Finland), and transport services (in the UK and France). A roll-back of some of the failed privatisations of the UK’s National Health Service (NHS) to strengthen non-profit healthcare providers might be seen as violations of CETA/TTIP – as might nationalisations and re-regulations in the financial sector such as those seen during the economic crisis.

8. Giving in to corporate demands for unfettered access to government procurement could restrict governments’ ability to support local and not-for-profit providers and foster the outsourcing of public sector jobs to private firms, where staff are often forced to do the same work with worse pay and working conditions. In CETA, governments have already signed up several sectors to mandatory transatlantic competitive tendering when they want to purchase supplies and services – an effective means for privatisation by gradually transferring public services to for-profit providers. US lobby groups such as the Alliance for Healthcare Competitiveness (AHC) and the US government want to drastically lower the thresholds for transatlantic tendering in TTIP.

9. Both CETA and TTIP threaten to liberalise health and social care, making it difficult to adopt new regulations in the sector. The UK’s TTIP services offer explicitly includes hospital services. In the CETA text and recent TTIP drafts no less than 11 EU member States liberalise long-term care such as residential care for the elderly (Belgium, Cyprus, Denmark, France, Germany, Greece, Ireland, Italy, Portugal, Spain, and the UK). This could stand in the way of measures protecting the long-term care sector against asset-stripping strategies of financial investors like those that lead to the Southern Cross collapse in the UK.

10. The EU’s most recent draft TTIP services text severely restricts the use of universal service obligations (USOs) and curbs competition by public postal operators, mirroring the wishes of big courier companies such as UPS or FedEx. USOs such as daily delivery of mail to remote areas without extra charges aim at guaranteeing universal access to basic services at affordable prices.

11. TTIP and CETA threaten to limit the freedom of public utilities to produce and distribute energy according to public interest goals, for example, by supporting renewables to combat climate change. Very few EU member states have explicitly reserved their right to adopt certain measures with regard to the production of electricity (only Belgium, Portugal, and Slovakia) and local energy distribution networks (amongst them Belgium, Bulgaria, Hungary and Slovakia) in the trade deals.

12. The US is eyeing the opening up of the education market via TTIP – from management training, and language courses, to high school ad- mission tests. US education firms on the European market such as Laureate Education, the Apollo Group, and the Kaplan Group could benefit as much as German media conglomerate Bertelsmann, which has recently bought a stake in US-based online education provider Udacity. The European Commission has asked EU member states for their “potential flexibilities” on the US request relating to education services.

13. The US film industry wants TTIP to remove European content quotas and other support schemes for the local film industry (for example, in Poland, France, Spain, and Italy). Lobby groups like the Motion Picture Association of America and the US government have therefore opposed the exclusion of audiovisual services from the EU’s TTIP mandate, fought for by the French Government. They are now trying to limit the exception as much as possible, for example, by excluding broadcasting from the concept of audiovisual services – seemingly with the support of EU industry groups like BusinessEurope and the European Commission.

14. Financial investors such as BlackRock engaged in European public services could use TTIP and CETA provisions on financial services and investment protection to defend their interests against ‘burdensome’ regulations, for example, to improve working conditions in the long term care sector. Lobby groups like TheCityUK, representing the financial services industry based in the UK, are pushing heavily for a “comprehensive” TTIP, which “should cover all aspects of the transatlantic economy”.

15. US services companies are also lobbying for TTIP to tackle ‘trade barriers’ such as labour regulations. For example, US company Home Instead, a leading provider of home care services for seniors operating franchises in several EU member states, wants TTIP to address “inflexible labour laws” which oblige the firm to offer its part-time employees “extensive benefits including paid vacations” which it claims “unnecessarily inflate the costs of home care”.

What is at stake in trade agreements such as TTIP and CETA is our right to vital services, and more, it is about our ability to steer services of all kinds to the benefit of society at large. If left to their own course, trade negotiations will eventually make it impossible to implement decisions for the common good.

One measure to effectively protect public services from the great trade attack would be a full and unequivocal exclusion of all public services from any EU trade agreements and negotiations. But such an exclusion would certainly not be sufficient to undo the manifold other threats posed by CETA and TTIP as many more provisions endanger democracy and the well-being of citizens. As long as TTIP and CETA do not protect the ability to regulate in the public inter- est, they have to be rejected.