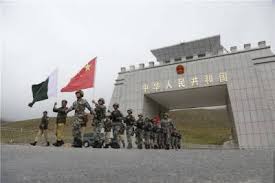 The second phase of Free Trade Agreement (FTA) between Pakistan and China is likely to be signed in next month, a senior official of Commerce and Textile Ministry said on Monday.

Negotiation on 11th round of Pak-China FTA were held here today, where both side have consensus to conclude the agreement in coming month.

The China has agreed to give unilateral market access and concession of 313 tariff lines to Pakistan for enhancing the Pakistan’s export, the official said while talking to APP here.

He said that Pakistan wanted market access in China like Association of South East Asian Nation (ASEAN) to get more benefits from the FTA for enhancing the country’s trade.

He said that Pakistan’s exports with China ranged from worth $140 to $170 million a month, which needed to be improved by $200 million after signing the FTA between the two nations.

Besides, the ministry of commerce had also set target for export of $300 million per month in coming three years, he said.

Replying to a question, he said that besides the FTA between the two countries, China also agreed to give market access worth $ 1 billion to Pakistan.

He said that Pakistan’s export to China stood at $1.5 billion per year which could go up to $2.10 billion and then to $3.2 billion after exploiting these term with China.