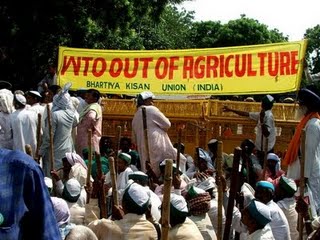 The stalled talks of WTOs Doha round negotiations that aim to further liberalize agriculture trade were revived in India by an informal mini ministerial hosted by the Government of India on 3rd and 4th of September. It was unanimously agreed by the ministers that efforts should be put into concluding the Doha Round by 2010. Earlier the negotiations had failed due to a tough stand taken by developing countries especially India to protect the interest of its key agriculture sector and large farming population. However the current UPA government has shown new enthusiasm in reviving the talks.

The adverse impacts free trade in agriculture have already adversely impacted farmers in India. Liberalization of the seeds, inputs and marketing sectors have led to the most unfortunate phenomenon of suicides and loss of livelihoods. The cost of inputs has risen while the international price depression of agriculture products has reduced the incomes of farmers. South India has been particularly badly affected by cheap international imports under WTO rules and FTAs underway such as SL India FTA. Many other FTAs are already in the pipeline. Palm oil from Malaysia and Indonesia have depressed the price of coconut among other crops like pepper and tea in south India. Pulse imports have depressed the price of domestic production in Tamil Nadu. Fisherfolk and dairy cooperatives are also facing threats of loss of livelihoods.

In the backdrop of all these circumstances farmers in India had mobilized on the inauguration of the WTO mini-ministerial in Delhi on 3rd Sep. A strategy meeting was also held a day earlier in Delhi on 2nd September organised by Via Campesina in association with other peoples’ movements and NGOs. A commitment was also made to consolidate movements in south India. Two South Indian movements, the Karnataka Rajya Ryota Sangha & the Green Brigade (KRRS) and Thamizhaga Vivasayigal Sangam (TVS), thus acted on their commitment and called a south Indian farmers’ conference in Bangalore to initiate debate on WTO and FTAs and to consolidate farmers’ movements in south India by forming a South Indian Coordination Committee of Farmers Movement. KRRS hosted the meeting.

Some of the key issues identified by the farmers in south India were the lack of awareness not only at the leadership level but especially at the grassroots of the numerous FTAs and WTO processes. The secrecy of the GOIs negotiations and need to stay updated on the recent developments. There was an urgent need felt to strategize in light of the soon to be held WTO ministerial in Geneva from the 30th Nov to 2nd Dec 2009.

Objectives of the conference

To initiate debate among farmers and farmers leaders on WTO and FTAs and help them to take a strong position.

To build an alliance or a federation of farmers associations of south India including Karnataka, Tamil Nadu, Ander Pradesh and Kerala. To make an action and strategy plan of South Indian farmers against WTO and FTAs and further coordinate with North Indian Farmers movements

Mr. Afsar Jafri from the Focus on Global south gave a talk on the World Trade Organisation (WTO) and Agreement on Agriculture (AoA) and its impact on Indian farmers and their livelihood.

A discussion over WTO and FTAs was undertaken and a plan of action was discussed and finalised.

A South Indian farmers’ alliance called the South Indian Coordination Committee of Farmers’ Movements (SICCFM) was created after agreement by all groups present.

A Resolution (enclosed below) was passed urging the Government of India to keep agriculture out of WTO and free trade and to bring back quantitative restrictions, tariffs and other mechanisms to save Indian agriculture and farmers livelihoods.

Caravan on WTO and FTAs from the south to the north of India in coordination with North Indian movements like Bhartiya Kissan Union (BKU) and others: A plan was discussed to carry out such a caravan however the exact plan, route and dates were yet to be discussed.

Production of awareness & campaign materials in local languages to be disseminated at the grassroots levels before the WTO ministerial in November in Geneva.

Meetings to be conducted in all capital cities of South Indian states.

Dharnas and actions to be conducted in all states

Next meeting of the SICCFM will be held on 24 October in Calicut, Kerala and a Dharna (protests) will also organised after the meeting.

List of participating organizations
About 260 farmers leaders from the following movements and organizations from Karnataka, Tamil Nadu and Kerala participated in the convention. Mr. Rakesh Tikait of BKU also attended this convention.

Enclosed: Resolution of SICCFM to the Governments

Keep Agriculture Out of WTO and India out of FTAs

On the occasion of the Mahatma Gandhi Birth Anniversary, the 2nd October, 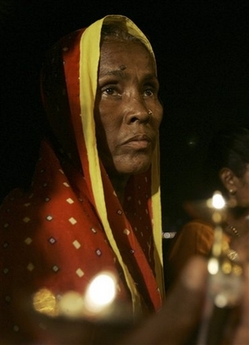 We, the farmers of India, are very much concerned about the Government of India’s push for undemocratic free trade policies in the form of World Trade Organisation (WTO) and Free Trade Agreements (FTAs) like the Indo-ASEAN FTA, Indo-European Union FTA, Indo-Korea FTA and others, under complete secrecy and without any proper assessment of its impact on the lives and livelihood of the millions of small and marginal farmers of the country. The UPA government is pursuing the free trade economic model especially at a time when the country is in the midst of a deep food and farm crisis and financial uncertainty and thousands of farmers have committed suicide in last 15 years of free trade regime under WTO and autonomous trade liberalization.

We, the representatives of the farming and peasants community of southern India, resolve that the latest push by the Government of India to re-energise and revive the Doha Round of WTO negotiations is unethical, illegal and not in the interest of the millions of Indian farmers and workers. It is an attempt to compromise the food security and sovereignty of the country. It is also an attempt to force open the Indian markets for the highly subsidised imports from the developed countries. The December draft text which has been accepted as a basis for the further negotiations in the Doha Round is very much biased against the developing countries and protects the interest of the developed countries and their corporations. It does not provide specific provisions for removal of all subsidies of the developed countries which depress global prices and insulate their transnational corporations against any market volatility.

We are also very much concerned about the weakening of Indian position on the key issues of safeguards and protection like Special Products (SP) and Special Safeguard Mechanism (SSM) which has been rendered very ineffective and meaningless in the December text. We believe that the protection mechanism in the form of SP and SSM in WTO is just a bait offered by the developed countries to force the developing countries to provide market access to their agribusiness corporations. We have already experienced the impact of trade liberalization in the edible oil sector where India was 95% self sufficient till 1995 but 15 years of WTO have rendered India into a net importer of edible oil. It facilitated transnational like ConAgra, Cargill, Bunge and others from US and EU to capture and control a major chunk of the edible oil market, displacing millions of small millers, traders and producers of edible oil in the country. We fear that what has happened in the edible oil sector will be repeated in others sectors if we let Manmohan Singh government to sign the Doha Deal.

We are very much concerned at the likely outcome of the 7th Ministerial conference in Geneva scheduled for 30th November to 2nd December 2009 which is taking place at a time when we have already experienced the impact of WTO. Even the likely projections from World Bank indicate that the developing countries would be losers if the Doha deal is put into effect. Instead of promoting development, the Doha Round will increase hunger, poverty and inequalities. Given the implications of the Doha Round on millions of lives and livelihoods of our people, the Indian government must restore import duties to the bound levels and bring back quantitative restrictions.

Given the adverse impacts of the Indo-Sri Lanka FTA on South India’s farmers where we witnessed hundred of farmer suicides in Kerala, we are very concerned that the drastic tariff reduction commitment under ASEAN-India will play havoc with the lives of Indian farmers and will destroy the agriculture and agricultural based economy of the southern states. The assurances by the Commerce Ministry of India that the negative list is an effective protection for farmers are illogical and false. We need comprehensive policies to protect farmers livelihoods, which is not possible under the framework of FTAs because of the pro-corporate nature of the FTAs.

Given the above concerns, we appeal to the State Governments of Karnataka, Tamil Nadu, Kerala and Andhra Pradesh to assert their constitutional rights to protect the farmers of their states by demanding for state level consultations and clearance for all aspect of agriculture negotiations in the WTO and Free Trade Agreements (FTA) since agriculture is a state subject.

We also demand that the Government of India must reject the Doha Development Round as it fails to take India’s minimum concerns on-board.

In view of the distorted nature of multilateral trading regime under WTO in which emergence of fair trade and a level playing field in agriculture looks a distant dream, we, therefore, appeal to the UPA and the Prime Minister of India to raise our demand in the WTO “to keep agriculture out of the WTO”.

We demand that all the political parties in India and especially from the South India must demand for a Constitutional Amendment which can make it binding for the government of the India to seek Parliament ratification international treaty and agreement signed by them which has implication over the lives and livelihood of the people and compromises India’s food security and sovereignty of the country.

We resolve to form South Indian Coordination Committee of Farmers Movements (SICCFM) to oppose and struggle against the WTO and the FTAs which liberalize our agriculture and facilitate the takeover of Indian agriculture by the corporations and will force the Indian farmers to quit agriculture or commit suicide. We resolve to fight against the anti people policies of the government of India and state government which compromises the interest of the Indian farmers and their lives and livelihood.