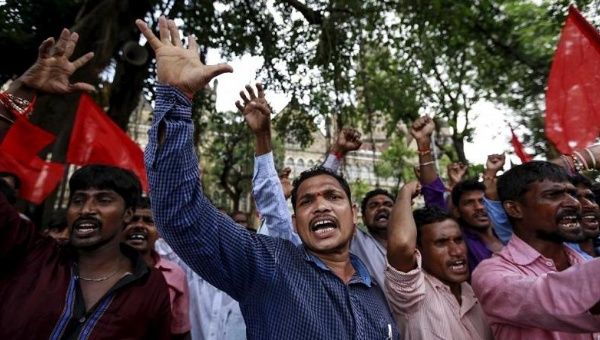 Workers from various trade unions shout slogans during an anti-government protest rally, organised as part of a nationwide strike, in Mumbai, India, Sept. 2, 2015.

The 18th round of RCEP negotiations begins today in Manila, Philippines as civil society organisations express deep concern about the mega trade agreement being negotiated secretly by 16 nations, including Philippines. The 16 countries currently negotiating the RCEP includes the 10 member ASEAN plus Japan, South Korea, New Zealand, Australia, China and India, spanning 50% of the world population and 29% of the world’s GDP. The RCEP is expected to have inter-linked and multi-layered impacts on a number of areas on such a large population, yet negotiations have remained behind closed doors. In the past four years and to this day, no text has been made available to members of the public, parliamentarians, civil society or media.

As we begin this month of May with the International Workers’ Day, it seems pertinent to take a look at the RCEP’s expected impact on workers in India.

RCEP requires member countries to drastically reduce import duties to between 0 and 3%. Compared to other countries in RCEP, India has higher import duties, at an average of 10% for industrial goods and 32.5% for agricultural products. For one, this will have huge implications on India’s trade with China. India has a large trade deficit (INR 3.45 lakh crores in 2015-16) with China, which will increase after RCEP. Companies producing steel and heavy machinery have already raised the concern that this would lead to displacing of local manufacturing by Chinese imports.

Pressure on these sectors due to increased imports will lead to management decreasing wages, using contract work and retrenching workers. Sectors such as garment, ceramics and electronics will also face negative impacts due to cheaper Chinese imports.

“The RCEP attempts to justify import duty cuts on industrial products apparently to promote Global Value Chains (GVCs) using the argument that GVCs are the future for the Indian industry and its workers. But the GVCs thrive by exploiting workers who are paid low wages, tied to informal jobs with extreme job volatility, and offered no or declining social protection measures all of which are necessary to support the GVCs and ensure profits for the rich companies at the top. RCEP undermines technological development in developing countries and hence does not work either for creating sustainable employment or for local value addition in developing countries” said Gautam Mody, General Secretary, New Trade Union Initiative (NTUI).

RCEP clauses will put limitations on the policies and regulations that governments can impose on foreign investors, including on domestic industrial policy, labour laws and wage policies. RCEP will include the infamous Investor-State-Dispute-Settlement Mechanism (ISDS) that allows foreign companies to challenge policies and judicial decisions in secret arbitration cases. This will have implications for designing a nationally appropriate and progressive industrial policy that embeds workers’ rights.

“There are numerous cases, for example, between Veolia (from France) and Egypt, that show how foreign companies can challenge any change in Indian labour laws (such as the Minimum Wages Act or maternity benefit provisions) arguing increases in their cost of operation. Further, not only the compensation demanded by companies, even the litigation itself is financially devastating. In one case, the government of the Philippines had to pay US$ 58 million, which it could have used for the vaccination of 3.8 million children”, said Adil Shariff, Additional General Secretary, Indian National Municipal and Local Bodies Workers Federation & President, INTUC, Hyderabad district.

Policy options for a progressive industrial policy will also be curtailed by the provisions suggested by Japan and South Korea on limiting export measures that, when combined with investment protection, will not only encourage over-exploitation of natural resources, but can limit domestic access to industrial raw material, including raw leather, wood and agricultural raw material, and thus impact equitable, socially just and environmentally sustainable industrial policy options and creation of decent industrial jobs in India.

The RCEP will not only impact manufacturing jobs but agricultural and service sector jobs as well. The e-commerce chapter in RCEP will impose binding rules that will force developing including India to give away data, the most prized industrial resource, for free to big companies in Japan, New Zealand, Australia and China. “This will seriously affect millions of small independent offline retailers and street vendors in India, as well as SME manufacturing sector workers as digitised-products will compete with physical goods made in India”, said Dharmendra Kumar, Director of India FDI Watch who works with small retailers in India. “The wholesale duty-free import of goods by e-commerce giants like Alibaba in China will threaten local products developed by SMEs and domestic job creation in those segments” he added.

KT Gangadhar, President, Karnataka Rajya Raitha Sangha (KRRS) said “the ASEAN has already devastated our plantation workers. The RCEP will have even stronger impacts on agricultural jobs. Not only will RCEP extract further access in plantation products for ASEAN, it will threaten livelihoods in sectors like dairy, meat and other agricultural products by allowing duty free imports of subsidised products from Japan, New Zealand and Australia”.

Trade agreements such as the RCEP magnify existing inequalities and create discriminatory impact on women, indigenous peoples, people living with HIV or other illnesses, people with disabilities,rural communities, farmers, workers and those dependent on state support, living in poverty or those already left behind. We have seen adverse impacts of free trade agreements in the region and strongly urge the Indian and other governments not to trade away workers’ rights and well being, which itself is critically linked to a nationally determined, environmentally sustainable and socially just industrial policy, over illusory gains in RCEP.

The Forum on FTAs