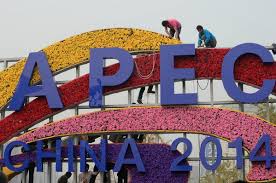 Ministers from 21 economies of the Asia-Pacific Economic Cooperation forum negotiated through Friday night and into Saturday morning on two deals. One would create a Free Trade Area of the Asia-Pacific, a priority of China, the meeting’s host. The other would expand the Information Technology Agreement, which eliminates tariffs on high-tech goods. In the latter negotiations, China has been reluctant to move ahead despite pressure from the U.S. and other APEC members, according to negotiators.

On FTAAP, China managed to get agreement on a two-year study of a potential deal, with a "goal of establishing the FTAAP as early as possible," according to a statement by the ministers. Chinese Commerce Minister Gao Hucheng hailed the deal, saying it would shift APEC’s role "from an incubator [of trade ideas] to concrete action."

China initially sought firmer commitments---including a deal that signaled the start of actual negotiations and a date to conclude them, said officials familiar with APEC negotiations. Instead, the study represents rhetorical backing for a deal that has long been on APEC’s back-burner.

The U.S. blocked China’s initiatives because it worried that launching FTAAP talks would impede progress on a separate trade deal, the Trans-Pacific Partnership. The ministers’ statement said that any FTAAP deal would build on " ongoing regional undertakings"—a reference to TPP and other regional trade deals.

"The Chinese got all they could expect—a reaffirmation that we all share in the vision of having a regional integrated model" for trade, said U.S. Chamber of Commerce Executive Vice President Myron Brilliant.

U.S. Secretary of State John Kerry said Saturday that negotiating the TPP "is a battle that we absolutely must win." Ministers from the 12 TPP nations met Saturday afternoon to try to narrow differences, including disputes between the U.S. and Japan over agriculture and auto trade. On Monday, the leaders of the TPP nations are again scheduled to discuss the trade deal, although no breakthrough is expected.

On the ITA, the dynamics are different. For the past two years, negotiators have been trying to update a deal that came into effect in 1996 to include multicomponent semiconductors, medical devices and various instruments and components.

About 250 new tariff categories would be added. Trade experts say about 30 categories are still being debated, with China holding out to keep items covered by tariffs. China is trying to build up its semiconductor industry, among other high-tech sectors, and sees tariffs as useful for warding off international competition.

China and the U.S. continued to wrestle over the ITA in Beijing on Saturday, but weren’t able to reach an agreement by the end of the day’s session. Individuals following the deal, however, said the two sides moved closer to an agreement during the talks and will continue their discussions through the leaders’ summit. Information technology industry lobbyists, who had planned to leave Beijing after the ministers’ meeting, say they now will stay on in hopes of a breakthrough.

The U.S. is trying to use China’s desire to have the Beijing conference produce concrete results as leverage, said trade analysts. This is the first major international summit held in China since Xi Jinping took over as Communist Party chief in 2012, and the government wants to use the session to affirm China’s greater role in the world.

In another expression of concern over the state of global trade, World Trade Organization Director-General Roberto Azevedo told trade ministers that WTO multilateral trade negotiations are "effectively paralyzed." That is because of India’s refusal to sign on to a major trade deal, according to trade analysts. New Delhi is trying to pressure the WTO to approve its plans to subsidize farmers, say trade officials. Mr. Azevedo was in Beijing to try to energize support for the WTO.

Jeremy Page and Mark Magnier contributed to this article.

Write to Bob Davis at bob.davis@wsj.com