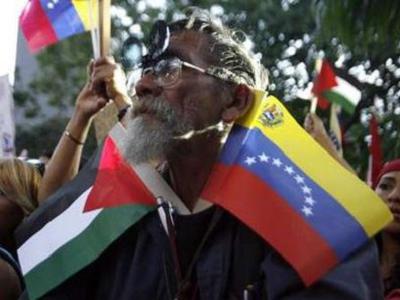 ’L. America is the only region wherein popular anger was reflected in official action.’

The Israeli bombing and invasion of Gaza, which has now claimed more than 1,400 lives, generated serious popular backlash the world over. The overwhelmingly weak official positions and statements, especially in the Arab world, stood in stark contrast to the outpouring of rage that was witnessed in the streets of capitals, cities and towns across the globe. This recent wave of protests has a particular quality, however, that differentiates it from past mobilizations: The initial flare up of energy is being channeled into effective grassroots political action, primarily in the form of an ongoing campaign of boycott, divestment and sanctions (BDS). The tangible victories and rise of BDS activism immediately following Gaza are a direct result of the many years of often little-acknowledged organizing, building, and mobilizing that was undertaken following the 2005 call from Palestinian civil society. It is important to look at these last four years in order to make sure that we continue to build on these victories. We have moved beyond questioning the efficacy of BDS and must now work to incorporate the growing numbers of people who, while outraged at the events in Gaza, are not yet connected to the BDS movement. We also must expand the actors and struggles involved in BDS by linking the Palestinian cause to other similar fights for social, economic and political justice.

A number of commentators have already noted the mass mobilizations that occurred in response to Gaza. Demonstrations and protests were undertaken on every inhabited continent involving millions of people across hundreds of cities. In the Middle East, Southeast Asia and Western Europe, where pro-Palestine demonstrations are typically strong, the numbers of participants and scale of actions were astronomical.

In the Middle East, particularly in Jordan and Egypt, the disconnect between the stance of US-backed regimes’ and their people vis-à-vis Israel was laid bare. In Egypt, the regime’s army of riot police was often unable to suppress demonstrations, which on many occasions numbered well into the tens of thousands. Similar scenes took place in Jordan, where thousands of protestors in Amman hurled stones at state police who blocked the street to the Israeli embassy.

Latin America, on the other hand, is the only region wherein popular anger was more or less reflected in official discourse and action. It is no coincidence that Bolivia and Venezuela, the two countries in the region that cut diplomatic ties with Israel, are also the two states whose governments operate, both in principle and in practice, according to the needs of the majority.

Palestine has developed into a global litmus test for democracy. While more progressive states in Latin America stood up for Palestine and BDS, repressive Middle Eastern regimes did their best to crush popular mobilization. The EU governments stood somewhere in the middle, giving further proof of their special form of ’democracy’ wherein people are allowed to express their opinions but not influence government decisions.

Regardless of governmental political leanings, the mobilizations evidence a considerable and growing popular support for the Palestinian people. Yet, these protests, while encouraging, do not guarantee longer-term political gains. The most recent and sobering example of this were the record numbers of people who turned out to protest the most recent invasion of Iraq and the subsequent problems that have plagued the creation of an effective anti-war movement.

Instead, we should look to the concrete BDS victories that followed Gaza as evidence of lasting political change. The actions of South African workers and Latin American social movements, to mention only a few examples, represent not only anger over Gaza, but also its effective channeling into an organized movement that far predates this most recent atrocity. They indicate that we have managed to build, in a short period of time, an effective focal point for uniting international solidarity and support for the Palestinian cause.

Immediately following Gaza, South African trade unions took action against Israel. The South African Transport and Allied Workers Union (SATAWU), part of the Congress of South African Trade Unions (COSATU) declared that they would no longer handle Israeli ships. Things came to a head when the Johanna Russ, a ship operated by Zim Israel Navigation Company, attempted to dock in the Durban port. Despite pressure and threats, SATAWU workers refused to handle the cargo or to allow scab labor to unload the ship.

This victory can be traced back to the early work of the Palestine Solidarity Committee, which, since its founding at the beginning of this Intifada, has been active in promoting a South African boycott of Israel. The 2005 call from Palestinian civil society bolstered the movement, and, over the past four years, organizers have built up considerable support for BDS within South African trade unions, movements, churches and institutions. In a 2006 speech in the UK to the Palestine Solidarity Campaign’s trade union conference, Willy Madisha of COSATU endorsed the BDS call and stated that, ’the trade union movement must move beyond resolutions, otherwise history will look back on us and spit on our graves.’ The movement has continued to move forward, and in 2008, COSATU promised to take “drastic action to disrupt” a government deal with Israeli firm Orsus Solutions Israel Ltd., which had been awarded a $5 million contract to upgrade the South African transportation system. With the Johanna Russ, the union took their first concrete action. Furthermore, COSATU has scored successes in gaining influence within the governing ANC party over the past several years. These kind of overall political dynamics have so far not stopped South Africa’s trade with Israel from growing yearly, but have laid the groundwork for a possible turnaround in national politics that would place moral responsibility for the implementation of BDS at the diplomatic level.

In South America, serious pressure is building against the Israel - Mercosur Free Trade Agreement (FTA), threatening to derail it entirely. South American social movements, who have years of experience fighting against free trade, have integrated Palestine solidarity into their general work. Following the 2009 World Social Forum in Brazil, key organizations in the country, including the MST, CUT and other smaller social movements are organizing actions on the popular level against the agreement. Further, a number of members of the ruling party are supportive of these efforts, and are working on the official level to promote the rejection of the FTA.

This campaign is also based on the call from Palestinian civil society. In 2006, when the agreement was first placed on the agenda of the Mercosur, the outrage created by the Israeli destruction of Lebanon pushed the social movements into action. They raised the issue at the Mercosur counter summit, and officials silently dropped the agreement from the agenda. Later, taking advantage of a lull in mobilization, the FTA was silently pressed through but is still undergoing the ratification process. In Brazil, social movements, unions, Arab organizations, and Palestine solidarity organized in a broad Palestine coalition and escalated their campaign against the Israel - Mercosur FTA This coalition has done work on several levels, mobilizing popular resistance, while simultaneously working and meeting with elected officials.

These successes provide us with a framework with which to ensure the sustainability of the expanding Palestine solidarity. This solidarity, which in many cases is not new, became more visible and vocal during Gaza and must be integrated into the global BDS movement.

One way to incorporate this expanding support is through the focus on common struggles and on mutual solidarity and interest. We can look to South Africa and Brazil for inspiration, where activists have been keen on tying BDS with local struggles and histories. Fights against racism, colonialism and economic exploitation as well as more specific campaigns for housing, land, water and educational rights are critical across the global south as well as in marginalized communities in the global north. Links can also be established on a more specific level, for instance, against individual firms that benefit from perpetuating apartheid and occupation in Palestine and are involved in similar practices abroad. One such company is the Israeli Elbit Systems, which supplies the Israeli military and is key in constructing the Wall while abroad is responsible for supplying drones to British and American occupation forces and erecting the wall on the US - Mexico border. This approach has already seen some exciting developments, for example activists fighting against racism in the US have drawn interesting parallels between the violence and racism as experienced in Oakland and Gaza as well as in New Orleans.

In places where comparable shared experiences or histories may not exist, activists have found other ways to link the Palestinian cause to the broader community. University activism, for instance, effectively uses the situation of Palestinian students and universities to connect with the student community and build support for BDS. Students’ calls for divestment from Israel and academic boycott are clearly linked with the call for more involvement in the universities’ decision making processes and financial transparency. The work over the last few years has set the stage for the various actions that we have witnessed in the universities, including the wave of direct action that took place in the UK, divestment at Hampshire, and growing interest in the academic boycott in both continents.

Israel has lost this most recent war on all fronts. In addition to failing to crush the resistance within Gaza, it was unable to control dissent in any of the territories under its military control. This defeat was mirrored on the international level; despite a massive PR effort coupled with an attempt to control the flow of images and information coming out of Gaza, Israel was unable to shape public understanding and discourse. A growing majority has openly condemned the operation for what it was - a massacre - and joined the BDS movement. The most recent victories of the movement have shown that the global struggle for genuine democracy and justice is not only a common ground on which the support for Palestinian rights is based, but a crucial precondition for effective solidarity. Our task now is to channel popular outrage into a coordinated, collective action.

- Jamal Juma’ is the coordinator of the Palestinian Grassroots Anti-Apartheid Wall Campaign, www.stopthewall.org. This article was contributed to PalestineChronicle.com. If you like this article, please consider making a contribution to the Palestine Chronicle.