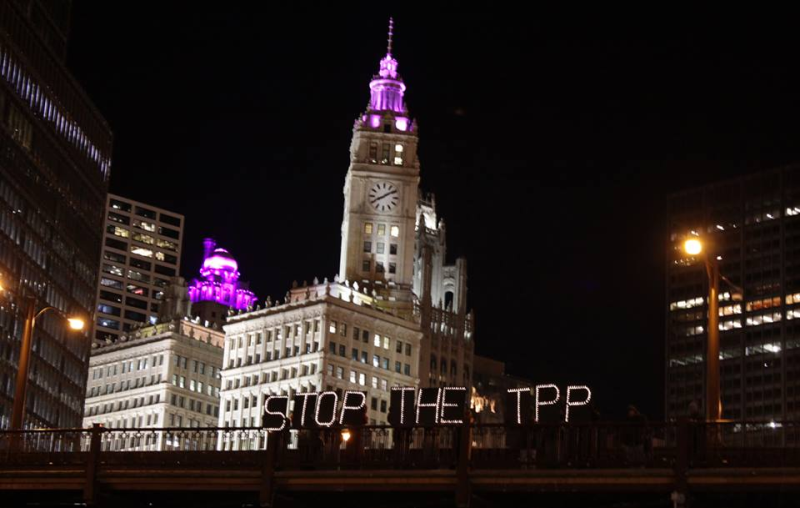 The Trans-Pacific Partnership (TPP) is a highly secretive trade agreement being negotiated between the US and eleven Pacific Rim countries, including Australia. Having obtained a fast-track authority from the United States Congress, US President Barack Obama is keen to finalise the deal. However, he was unable to achieve a resolution of the deal at recent talks in Hawaii on the TPP. A number of chapters of the TPP will affect the creative artists, cultural industries and internet freedom — including the intellectual property chapter, the investment chapter, and the electronic commerce chapter.

Legacy copyright industries have pushed for longer and stronger copyright protection throughout the Pacific Rim. In the wake of the Hawaii talks, Knowledge Ecology International leaked the latest version of the intellectual property chapter of the TPP. Jamie Love of Knowledge Ecology International commented upon the leaked text about copyright law: ‘In many sections of the text, the TPP would change global norms, restrict access to knowledge, create significant financial risks for persons using and sharing information, and, in some cases, impose new costs on persons producing new knowledge goods.’

The recent leaked text reveals a philosophical debate about the nature of intellectual property law. There are mixed messages in respect of the treatment of the public domain under copyright law. In one part of the agreement on internet service providers, there is text that says that the parties recognise the need for ‘promoting innovation and creativity,’ ‘facilitating the diffusion of information, knowledge, technology, culture, and the arts’, and ‘foster competition and open and efficient markets.’ A number of countries suggested ‘acknowledging the importance of the public domain.’ The United States and Japan opposed the recognition of the public domain in this text.

With much lobbying from Hollywood and the music industry, the United States Trade Representative has demanded that all TPP members provide for copyright protection for the life of the author plus 70 years. Australia previously acceded to such demands with the Australia-United States Free Trade Agreement 2004. However, a number of other TPP members — such as Canada, Japan, New Zealand, and Malaysia currently have a copyright term of life of the author plus 50 years. There has been much concern about the impact of the Mickey Mouse copyright term extension upon innovation, competition, cultural heritage, and the public domain. Even worse, Mexico has been pushing for a copyright term of life plus 100 years.

Moreover, there is disquiet that the TPP would limit the policy flexibilities available to address the problem of orphan works — where the author cannot be identified because they are lost or missing.

The TPP also seeks to export aspects of the Digital Millennium Copyright Act 1998 (US) to the rest of the Pacific Rim. It is disturbing that the TPP has sought to entrench special protection in respect of digital locks — known as technological protection measures. There has been a concern about the impact of such anti-circumvention rules upon fair use and the freedom to tinker. There has also been a fear that digital locks have exacerbated discriminatory IT pricing — particularly in Australia. Cory Doctorow and the Electronic Frontier Foundation have been fighting to repeal technological protection measures in the Apollo 1201 Project. The TPP would also seek to place regulatory burdens upon internet service providers in regulating copyright law. Again, the takedown-and-notice system in the Digital Millennium Copyright Act 1998 (US) has proven to be ill-adapted for a contemporary world of search engines, social media, micro-blogging, and cloud computing.

There has been much concern about the problem of copyright use and abuse. The TPP provides recognition: ‘Each Party shall ensure that its judicial authorities shall have the authority to order a party at whose request measures were taken and who has abused enforcement procedures to provide the party wrongfully enjoined or restrained adequate compensation for the injury suffered because of such abuse.’ However, the United States has opposed the inclusion of this provision. This is disappointing — given the rise of the problem of copyfraud, where copyright claims are made about public domain material.

There has been a discussion about the impact of the TPP on copyright exceptions — like the defence of fair use. Jeremy Malcolm form the Electronic Frontier Foundation commented: ‘Without users at the negotiating table, it’s no wonder that the TPP is trampling on their rights.’

Martin Frid from the Consumers Union of Japan was worried that the proposed regime would adversely affect creators and consumers. He observed that the Japan Playwrights Association, the Japan Theatrical Producers Association, and the Japan Theatre Arts Association jointly issued an appeal, opposing the TPP. Frid commented: ‘The proposals have also spooked Japanese otaku (fans), who are rightly worried that police could crack down on their harmless enjoyment of manga and anime, through activities like cosplay and doujinshi (fan-produced comics) that might be technically infringing, but which copyright owners tolerate because it is harmless or even beneficial to them.’

There have been concerns about how the copyright maximalist regime will affect creative artists. Brett Gaylor, the documentary film-maker of Rip! A Remix Manifesto, was worried about how the TPP would affect creative freedom. He commented: ‘In the digital age, being creative is increasingly an act of copying — whether that is sampling music, quoting an article in an online publication, or including a photo or moving image in a YouTube video.’ Gaylor maintained: ‘There must be a balance between the need to compensate creators for their work, and the ability to copy, reference, and build on others’ works.’ He lamented: ‘Sadly, the current trend is towards rules that lock up works of art and stifle independent creators’ output.’ Gaylor was concerned that the TPP would create new barriers for free speech and free expression.

Moreover, the TPP also seeks to protect television broadcasters against new emerging services, such as Aereo and FilmOn. The United States demanded: ‘No party may permit the retransmission of television signals (whether terrestrial, cable, or satellite) on the Internet without the authorization of the right holder or rights holder of the content of the signal.’

The TPP also provides for an arsenal of intellectual property enforcement measures — including civil remedies, criminal offences, and border measures in respect of copyright law. Moreover, there has been a push for website blocking for Internet providers. Locally, the Australian Government has already introduced some new radical measures — such as providing copyright owners the power to censor foreign websites accused of copyright infringement, or facilitating copyright infringement.

In addition, there has also been much controversy over the inclusion of an Investor-State Dispute Settlement (ISDS) mechanism in the TPP. Copyright owners and Big IT could deploy investor clauses to challenge progressive law reforms — such as the adoption of a defence of fair use, and meaningful IT Pricing reforms in Australia.

The TPP will not only transform physical trade in the Pacific Rim, but it will also transform the digital environment. With its strong protection for intellectual property, investment, and electronic commerce, The TPP will provide a radical challenge to creative artists, cultural industries, and Internet freedom in Australia and other TPP countries.