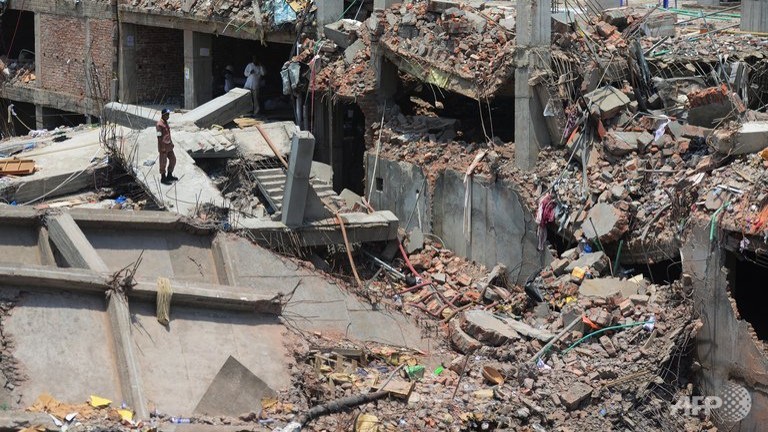 A Bangladeshi firefighter stands amid the debris as rescue and army personnel continue recovery operations after the Rana Plaza building collapsed in Savar, on the outskirts of Dhaka. (AFP/Munir Uz Zaman)

With the Cabinet’s nod to give it a go ahead, the proposed Trade and Investment Cooperation Framework Agreement (TICFA) between Bangladesh and the USA is almost through, awaiting to be signed at a convenient time by the two governments. This, no doubt, marks the close of a long-drawn debate and the beginning of a new chapter in US-Bangladesh relations. The original proposal for a bilateral trade and investment agreement dubbed TIFA (Trade and Investment Framework Agreement), to recall, came way back in 2003, and was abandoned on Bangladesh’s objection to some of the paragraphs, particularly those on labour rights, corruption and bribery. It wanted to drop and rephrase those parts. The present proposal, renamed TICFA, came up subsequently with some modifications. And here, although the corruption- and bribery-related clauses were conveniently reformulated, the issue that continued to hold the premise of dispute, apparently stalling the progress of signing the agreement, related to labour rights. The US proposal in the revised draft text referred to all core labour standards adopted by the International Labour Organisation (ILO): freedom of association and the effective recognition of the right to collective bargaining, elimination of all forms of forced or compulsory labour, effective abolition of child labour, and elimination of discrimination in respect of employment and occupation.

On its part, Bangladesh was reported to have argued that it was agreeable to all but one — freedom of association and the effective recognition of the right to collective bargaining. However, with the developments in recent times namely the USTR’s (United States Trade Representative) GSP sub-committee contemplating on a cut or withdrawal of preferential duty benefits of Bangladesh on complaints from reputed rights organisations like AFL-CIO (American Federation of Labour and Congress of Industrial Organisations), followed by the incidents of Tazreen blaze and the worst ever factory calamity that killed more than a thousand garment workers at the collapse of the infamous Rana Plaza, all stakeholders in the country including the government have come to terms with the reality of labour rights’ issues in unequivocal terms. No doubt, all these apparently prompted the move to find a solution to the bottlenecks of agreeing to sign the TICFA. It has been around five years that the proposed agreement awaited decisive nod that finally came on June 17, 2013 at the Cabinet meeting chaired by the Prime Minister.

This newspaper had earlier noted a number of times that signing the TICFA is positive in the sense that it would bring the trade and investment regimes of the USA and Bangladesh under a framework agreement, and more importantly, it would provide an annual forum to review bilateral trade and investment matters with scopes for corrective measures, if necessary. It may be mentioned that at present there is no such structured forum to discuss bilateral trade and commerce issues between the two countries. As for the US, it needs a framework agreement on trade and investment to engage in deepening bilateral ties. For Bangladesh, deepening of ties is implicit in the removal of some critical market access barriers by way of reduced duties, to start with. It is here that the stake weighs heavy for Bangladesh.

The Cabinet’s nod for the go-ahead may also be perceived as a good signal prior to the USTR’s verdict on the GSP issue, although there is no casual connection between the two. However, as the things stand now, with TICFA glitches done away with, Bangladesh-USA relations may aspire to reach newer heights in the days to come.

Bangladesh approves trade deal with US

DHAKA: Bangladesh on Monday approved a trade agreement with the United States as it comes under intense pressure from Washington to improve labour rights following a series of factory disasters.

The deal will lead to stronger trade and investment ties between the two countries on the back of growing Bangladeshi garment exports to the US, he said.

Bangladeshi trade officials have said Washington proposed the deal several years ago, but Dhaka resisted signing the accord because of concerns it could lead to scrutiny of the country’s poor labour and intellectual property laws.

Dhaka’s position reversed after it came under intense pressure, including from Western governments, to improve working conditions in the country’s 4,500 garment factories following a series of industrial disasters that killed some 1,250 people.

A spokesperson for the US embassy in Dhaka welcomed Monday’s decision saying "we look forward to further discussion so that the agreement can be signed in the near future".

Two-way goods trade between the countries totalled $5.4 billion in 2012, according to the Office of the United States Trade Representative website.

Last week the US said it would soon decide whether to suspend Bangladesh from a duty-free accord as it urged Dhaka to take action to improve labour conditions.

President Barack Obama’s administration in January launched a review on whether to keep Bangladesh in the Generalized System of Preferences, or GSP, which provides duty-free access for thousands of goods.

The review was under way when Rana Plaza, a nine-story garment factory complex on the outskirts of Dhaka, crumbled on April 24 and killed 1,129 people.

Bhuiyan, the cabinet secretary, said the approval of Ticfa was not linked to the GSP, but he said signing the deal could "eventually positively impact" on the US decision on the duty-free accord to Bangladesh.