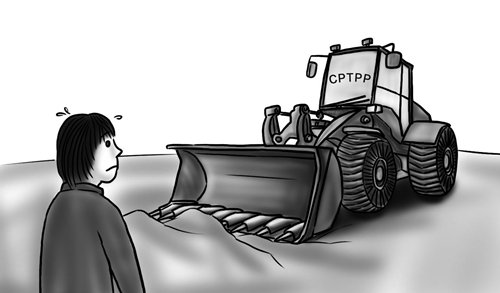 Time for China to consider joining the CPTPP By Wang Huiyao

Under the impact of anti-globalization trends like populism and trade protectionism, promoting regional economic integration has become an important path for countries to seek international cooperation. After the Regional Comprehensive Economic Partnership (RCEP) made substantive progress, it is now time for China to consider joining the Comprehensive and Progressive Agreement for Trans-Pacific Partnership (CPTPP).

The CPTPP, which was bolstered by Japan and Australia, was developed from the US-led TPP. Although the US withdrew from it after US President Donald Trump took office, the influence of the new CPTPP on the Asia-Pacific region cannot be underestimated.

The CPTPP has 11 members and is the largest free trade zone in the Asia-Pacific region, and the third-largest in the world. According to statistics from the World Bank, the total population of CPTPP members in 2017 approached 500 million, and the combined GDP amounted to $10.6 trillion, accounting for over 13 percent of the world economy. Countries such as Colombia, Indonesia, South Korea, the UK and Thailand have expressed willingness to join the organization, underscoring its potential. If China joins the bloc, the CPTPP is expected to account for nearly 30 percent of the world’s total GDP.

Nine months since the CPTPP has taken effect, it has begun to promote trade in the region’s countries. Vietnam, for example, as a developing country is facing a higher standard of CPTPP free trade rules. After opening up the market and drastically reducing tariffs, the country has become one obvious beneficiary of the CPTPP, rather than a nation suffering from severe impact.

The benefit Vietnam obtained by joining in the CPTPP has proven the "comprehensive and progressive" nature of this agreement. Particularly amid a trend of escalating trade protectionism, the slowdown of the world economy and rising anti-globalization sentiment, the CPTPP plays an important role in promoting international cooperation and advocating multilateralism.

It is a high-standard trade agreement that is hospitable to developing countries like China. Members include developed countries like Japan, Australia and Canada, as well as emerging economies with great economic potential like Chile, Malaysia, Mexico and Vietnam.

In order to achieve better cooperation between developed and developing countries, the CPTPP will provide reasonable protection for its developing nations while it speeds up the opening process. A balance between fairness and inclusiveness is an important mechanism for promoting economic integration in the Asia and Pacific region. China’s timely participation in the CPTPP will become a powerful starting point for deeper engagement in regional cooperation in the region.

Some concerns over China’s participation may boil down to issues such as intellectual property, environmental protection, management of data flow, labor standards and reforms of state-owned enterprises. But in recent years, factors like the China-US trade war and the accelerating pace of reform and opening-up have brought China closer to CPTPP standards.

With growing, innovation-driven development, China has greatly improved its intellectual property protections. The World Bank’s Doing Business report shows that China’s global ranking jumped from 78 in 2018 to 46 in 2019.

In terms of environmental protection, the concept of green development has been fused into China’s development path.

Additionally, the management of data flow, the elevation of labor standards and the reform of state-owned enterprises are key aspects of China’s reforms.

In the long run, joining the CPTPP is not only aligned with China’s development direction, but can also promote reforms through opening-up. At the same time, this will demonstrate China’s determination to open further, to gain the upper hand in China-US trade negotiations, and to have more of a say in global economic governance and trade rule creation.

In terms of the external environment, most CPTPP members show a positive attitude toward China’s participation.

As a key founding member of the CPTPP, China-Japan relations are vital to China’s potential participation. At present, bilateral relations are stable and warming with the two countries’ strengthening economic and trade connections.

Now is a strategic time for China to start negotiations with the CPTPP. China is an important economy in the Asia-Pacific region and a major force in enhancing economic integration there.

With the anti-globalization trend still on the rise, and while China-US trade negotiations remain uncertain, a new channel will open for China’s economic and trade development in the Asia-Pacific region if it joins the CPTPP. Such a move could catalyze the finalizing of the RCEP and the establishment of the Free Trade Area of the Asia-Pacific.

Therefore, China should communicate with relevant countries to begin CPTPP negotiations in a timely manner, and should contribute more Chinese power to promoting the integration of the Asia-Pacific region and resisting anti-globalization.