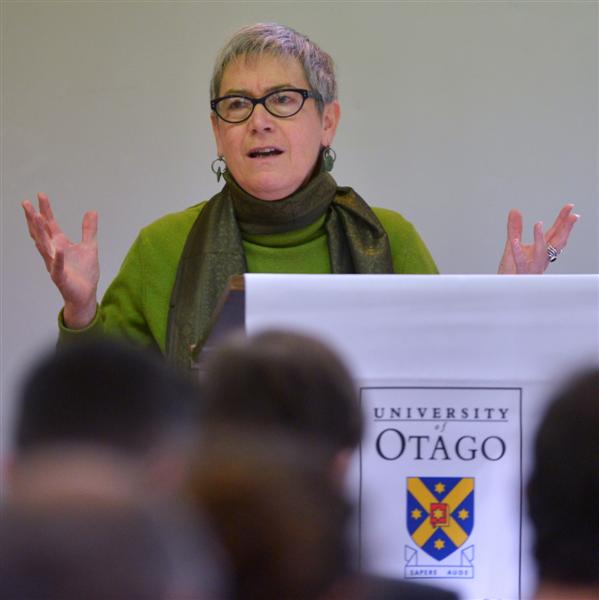 "That the text has to be secret while in negotiation is not true," Kelsey said. ’’What they’re trying to do is create a new norm.’’ Photo by Gerard O’Brien.

The Trans Pacific Partnership is a ’’geopolitical contest’’ between the United States and China, University of Auckland law professor Jane Kelsey says.

’’We have a kind of cold war taking place by proxy through competing [trade agreement] negotiations,’’ Prof Kelsey told the Foreign Policy School in Dunedin.

Rhetoric concerning the TPP debate had become ’’quite extraordinary’’ in the United States, where the deal is seen as a way of limiting China’s Pacific influence.

New Zealand needed more debate about such agreements and how they affected security relationships. But it was difficult, partly because the National and Labour parties took the same supportive line on free trade.

It was ’’nonsense’’ to suggest New Zealand could exit the deal once signed, as no country had ever done such a thing.

The goal of ’’mega agreements’’ such as the TPP was to create a set of global rules, which ignored the social conditions present in individual countries, Prof Kelsey said.

There would be ’’real problems’’ in some countries when the agreement started to ’’bite’’.

Prof Kelsey said the ground was ’’continuing to move very fast’’ in the TPP, with the deal guaranteed fast track authority after a crucial majority was secured in the Senate.

Secrecy has shrouded the negotiations, which Prof Kelsey believed had ’’backfired very badly’’ on the deal’s proponents.

That it had to be secret while in negotiation was the ’’mantra’’ of Prime Minister John Key, Trade Minister Tim Groser and ’’most recently, Mike Hosking’’, but it was not true.

’’What they’re trying to do is create a new norm.’’