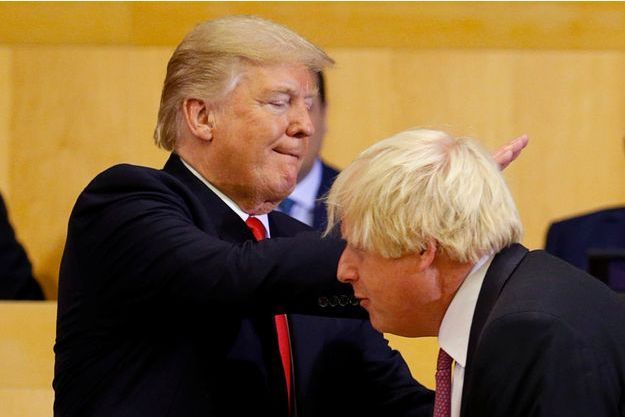 Trump: US and UK working on ’very substantial’ trade deal

US President Donald Trump has said talks about a "very substantial" trade deal with the UK are under way.

He said a bilateral post-Brexit deal could lead to a "three to four, five times" increase in current trade.

There are no details about how this would be achieved.

After a phone call with Boris Johnson on Friday, Mr Trump said the new prime minister would be "great". He added US-UK trade had previously been "impeded" by Britain’s membership of the EU.

Once the UK leaves, he said, the UK can expect to do "much more" trade with the US, he said.

Mr Johnson and Mr Trump said they would begin formal negotiations "as soon as possible" after the UK leaves the EU.

While the UK is in the EU, it cannot sign its own trade deals. Brexit is due to happen on 31 October.

What is a trade deal?

Trade deals involve two or more countries agreeing a set of terms by which they buy and sell goods and services from each other.

Deals are designed to increase trade by eliminating or reducing trade barriers. These barriers might include import or export taxes (tariffs), quotas, or differing regulations on things such as safety or labelling.

Why don’t the US and UK already have a trade deal?

In short, because the US and EU do not have one.

In 2013, under President Barack Obama, the US and the EU launched a programme of negotiations known as the Transatlantic Trade and Investment Partnership, or TTIP.

That proposed trade agreement was put on hold by the US after Mr Trump was elected as president, but the EU has approved new talks.

How long could a US-UK trade deal take to agree?

The EU-Canada agreement - which removed 99% of tariffs - was seven years in the making, while the EU-South America deal agreed in June took 20 years to negotiate.

The EU and US have been having a stop-start conversation about trade for years but a fresh round of formal talks were only recently approved by the EU.

So even though both Mr Trump and Mr Johnson seem keen to do a deal, it could still take years, although - in theory - it is easier to negotiate with one country than a multi-national bloc.

Barack Obama said in 2016 a UK-US trade deal could take 10 years to negotiate if the UK left the EU.

How much is US-UK trade worth at the moment?

The US is a major trade and investment partner for the UK - by some measures the biggest of all.

According to the Office for National Statistics’ latest available figures, the US (including Puerto Rico) is our top trading partner.

The US Chamber of Commerce says the UK is the US’ seventh largest trading partner and the fourth largest export destination for American goods and services.

What trade deals has the UK done so far?

As a member of the EU, the UK is part of about 40 trade agreements the EU has with more than 70 countries.

If the UK leaves the EU without a deal it would lose these trade deals immediately - worth about 11% of total UK trade.

These areas account for 64% of trade currently covered by EU agreements for which the UK is seeking continuity, the government says. The agreements mostly replicate EU trade deals.

In addition, the UK has also announced a deal in principle with South Korea, which is "expected to be signed shortly".