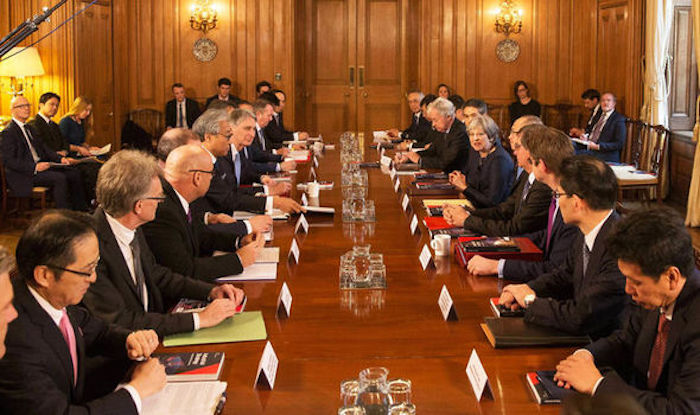 LONDON – The U.K.’s hopes of a swift trade deal with Japan will ultimately rest on a successful resolution to the main talks between London and the European Union on a new trading arrangement, some experts say.

Virtual meetings on a new free trade agreement between the U.K. and Japan will begin shortly, but little of substance may be achieved due to the lack of progress on the key talks in Brussels, which will bear heavily on minds in Tokyo.

And even when negotiators from the U.K. and Japan start discussions on the terms of a new trade deal, the interests of food producers and powerful domestic lobbies may make getting a deal harder than initially envisaged, observers claim.

Unveiling a negotiating objectives paper for the bilateral talks in May, International Trade Secretary Liz Truss said, “Both sides are committed to an ambitious timeline to secure a deal that goes even further than the EPA especially in digital and data,” referring to the Economic Partnership Agreement between the EU and Japan.

Bill Emmott, chairman of The Japan Society in Britain and a writer and consultant on international affairs, said, “I think that ultimately it will be quite easy to get a deal between Japan and the U.K. because I think there is goodwill on both sides and I don’t think the gaps are too huge.”

But he believes neither side will push ahead substantially until the terms of the new trading arrangement between the U.K. and the EU are clearer.

This is because Japan has many manufacturing and services subsidiaries that rely on easy access into the EU from their British base.

The talks between the U.K. and the EU are currently in a fragile state, with some observers expecting negotiations to be extended into next year.

London is free to implement new trade deals from January. If it proves unable to broker a deal with Brussels, the two will revert to World Trade Organization terms, which would mean greater barriers to trade.

Under the trade deal between the EU and Japan, tariffs and quotas on a wide range of items, including food, drink, clothing and cars, were either abolished or will be reduced over time.

London is keen to maintain that EPA regime in its own negotiations with Tokyo, and also reduce tariffs on certain goods that sell well in Japan including confectionery, whisky, leather products, textiles, shoes and clothing. However, Japan has signaled it will not simply “cut and paste” the terms from its European Union agreement for a deal with Britain.

London will be seeking enhanced provisions on data, financial services, the recognition of professional qualifications and improved access for British service suppliers, according to the objectives paper published May 12.

“Everyone has to pay for what they want and I think Japan will be tough on tariffs,” he added.

“Japan has already closed the door on further farming reforms including concessions to the European Union and the United States. It would take a lot for Prime Minister (Shinzo) Abe to return to the Diet asking for the same for the United Kingdom.”

However, there are several concessions London could grant to pave the way for an agreement.

One already mooted is to immediately scrap tariffs on Japanese cars, rather than the phased reduction under the EPA.

The negotiating objectives paper states, “The government will consider whether for some tariff lines it would be beneficial to seek or provide accelerated liberalization.”

Lee-Makiyama argues both sides have areas of common interest, principally around data and investment.

The U.K. could, for example, ensure that potential disputes between Japanese investors and the British government are decided via tribunals rather than permanent investment courts.

The EU’s preference for permanent investment courts was a bone of contention in the EPA talks, as Japan favors tribunals that are funded by businesses rather than governments.

In addition, the U.K. could be more flexible around visas for Japanese professionals and their families who are transferred to the country.

In terms of data, London could offer stronger commitments on the free flow of data across borders than under the EPA. This would include a prohibition on the blocking of data flows and data localization requiring companies to retain data on servers within a country, which leads to greater costs.

“For Japan, this is important because it’s a form of regulatory certainty. Japanese multinationals need open data flows to avoid duplicating the costs of IT systems,” said Lee-Makiyama.

He also says negotiations in parallel to the FTA could lead to greater regulatory equivalence in the financial sector.

This would allow both Japanese and British banks to re-shore a lot of back-office functions from their subsidiaries and thereby reduce costs.

But Emmott doubts the U.K.-Japan deal will be a significant improvement on what is already offered under the EPA.

“The fact is that the European Union is a regulatory superpower and that applies above all to data, and I therefore can’t see the United Kingdom being significantly different from a Japanese point of view,” he said.