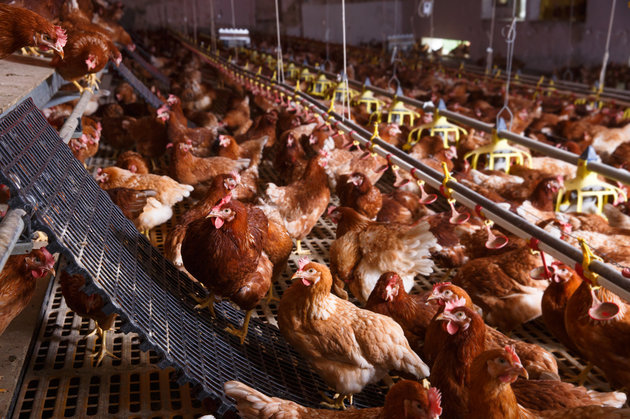 “Overwhelming” support in the UK for high animal welfare standards is under threat from Brexit, an influential parliamentary committee has said.

The report from the House of Lords warns the standards of UK producers could be put under pressure by demands from other countries to allow an influx of cheap and lower-standard food as part of trade deals.

It was published as the prime minister’s spokesperson said that allowing imports of US products such as chicken meat washed with chlorine would not be ruled out in trade deals. This came from No 10, despite assurances to the Guardian last week from the Department of Environment and Rural Affairs (Defra) that any trade deal would maintain or raise food standards.

Preserving food standards would be “of the highest priority” Defra told the Guardian, and trade deals in agriculture would not be “a race to the bottom”.

Livestock welfare and crop-growing standards in the UK are among the world’s highest, but that could be subject to sudden change if farmers are challenged by imports from countries that produce meat and other food with much lower standards. Without firm and explicit support for agricultural standards in any post-Brexit trade agreements, the UK’s high standards would be at risk.

The House of Lords subcommittee on EU Energy and Environment found that if imports from other countries were allowed without the current EU safeguards, then the standards of UK producers would come under pressure.

“The government’s wish for the UK to become a global leader in free trade is not necessarily compatible with its desire to maintain high animal welfare standards,” the committee found.

Liam Fox, one of the ministers leading the government’s Brexit strategy, is in the US for talks on a new trade agreement that is almost certain to include agricultural products, including meat and genetically modified vegetables.

At present, the UK is protected from controversial US-produced agricultural goods, by EU standards that deter imports of products such as meat that has been washed in chlorine, which has a high bacterial content related to low animal welfare standards. EU rules also barmeat that has been fed with hormones and growth-promoting antibiotics.

Such products are allowed for sale in the US and attempts by the UK to impose higher standards on any imports would be a difficult part of trade deal negotiations.

Lord Teverson, chairman of the sub-committee that wrote the House of Lords report, said Brexit would threaten the UK’s high standards of food for human consumption.

But he warned: “The government will need to consider the effect of increasing standards on the competitiveness of UK producers as well as the future trading relationship with the EU.”

The committee said that while consumers are currently protected by the high welfare standards required by the EU, which are much more stringent than those in countries such as the US and China, most people buying food are unaware of this.

Food labelling standards may also confuse consumers, the committee said, as they do not make it clear where and to what standards meat and vegetables have been produced.

Keith Taylor, an MEP and spokesman for the Green party, said: “Fox is promising to discard the vital precautionary principle that guides EU policy-making and protects citizens from any process, procedure or product that carries with it a plausible risk of harm.”

He pointed to the example of pesticides, dozens of which are permitted in the US but banned in the EU on health and environmental grounds.

In the US,antibiotics are routinely used to improve animals’ growth, sparking fears that meat consumption could increase human resistance to antibiotics. They are also used to limit diseases that could otherwise spread in the megafarms, holding tens of thousands of animals, that are commonplace in US farming.