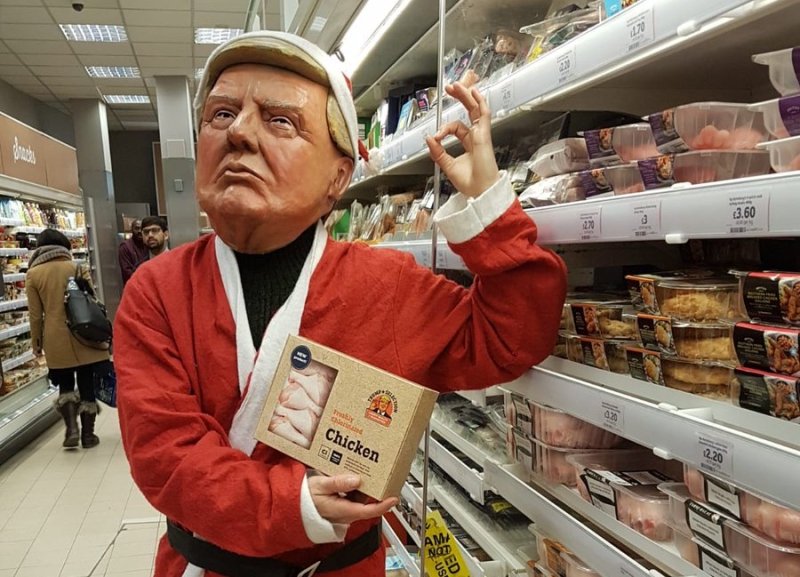 UK tells Trump that American chicken is still off the menu

U.K. officials are preparing to leave the European Union at month’s end in the culmination of a three-and-a-half year domestic political drama immortalized as Brexit.

For those who’ve tuned out of the daily news cycle in the U.K., it’s been an existential debate about sovereignty and self-determination revolving around a central question: Are the British people better off hitched to the EU’s trade arrangements, immigration laws and commercial regulations, or going the free-agent route.

With the breakup near, Prime Minister Boris Johnson’s administration is preparing to negotiate trade deals this year with the EU and the U.S. Typically such agreements take years. The timetable for these talks is months.

With reelection on the brain, President Donald Trump is ogling the opportunity. “This deal has the potential to be far bigger and more lucrative than any deal that could be made with the EU,” Trump tweeted in December.

While there are plenty of sticking points, count chlorine-washed chicken as early out of the gate. Most Americans aren’t fussed by domestically produced poultry parts bathed in a water-and-chemical bath to kill bacteria — per capita consumption will approach 100 pounds this year, double the level from 35 years ago, according to the National Chicken Council.

But U.S. chicken imports offend British sanitary sensibilities. Not just for the safety of people who ingest it, but mainly because the process compensates for less stringent health standards when the chickens are being raised. Still, the dismay at the prospect of eating it grabs headlines. The Murdoch-owned Sun newspaper last year ran a story laying out how a pregnant Meghan Markle, the Duchess of Sussex, “reveals fears over chlorinated chicken from the U.S.”

Now, just when Trump administration officials are feeling good about their tough negotiating strategy, a U.K. official is boldfacing the red line around the white meat. Environment Secretary Theresa Villiers, speaking on the BBC television this week, said her government won’t allow chlorinated chicken and hormone-treated beef into Britain.

“We will defend our national interests and our values, including our high standards of animal welfare,” Villiers said. She said both products are banned under EU law, and the U.K. will maintain that regulation after it leaves the bloc.

The U.S. has argued for years that the EU’s ban on chlorinated chicken amounts to a non-tariff barrier to trade because it’s not based on scientific evidence that the treatments are harmful to humans. Indeed the EU permits salad producers to wash their leaves in chlorine. The EU chicken ban resulted in a precipitous drop in U.S. poultry imports — from $52 million in 1997 to $13.5 million in 2018.

Such negotiations inevitably involve trade-offs. For each defensive demand the U.K. makes, the U.S. may seek offensive concessions in other sensitive areas, like the third rail of British politics — foreign access to the National Health Service. If Britain draws too many red lines, the U.S. may cede less to the U.K., which would result in a deal that falls short of Trump’s big claims and fail to make up for the U.K.’s loss of access to the European market.

In this game of chicken, Britain has a lot more to lose than its appetite.