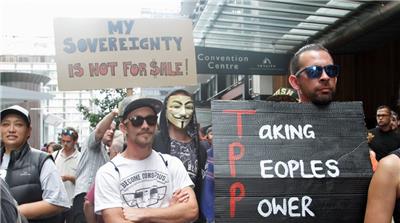 The year 2017 begins with a peal of thunder. The newly elected US president Trump abandons the Trans Pacific Partnership, a genuine geo-political monster project which aimed at excluding China as main contender of the USA in the Pacific. Simultaneously it looks like the new US administration wants to renegotiate NAFTA, and the future of the TTIP negotiations are also highly uncertain. Does the USA thus abandon their classical political hinterland? These big trade agreements have often been understood as substitutes for the stalled WTO negotiations. So, big surprise at the beginning of 2017 – which will be the next steps of the free trade hawks? What should we do against the next neoliberal moves?

To understand all this we need to look back to the history of global trade negotiations. They began in 1947, when 23 governments signed the General Agreement on Tariffs and Trade (GATT) to remove tariffs and other trade barriers between countries. GATT was replaced by the World Trade Organization (WTO), signed in 1994 by 123 nations. The focus of the WTO is on regulation of trade through a framework for trade agreement negotiation and a dispute resolution process. In 2001 the WTO launched the Doha Development Round, which was supposed to be a major step in the direction of developing countries listing 21 subjects in the work programme aiming to improve their trade capacities. The Doha Round is still incomplete due to the ongoing conflict between developed countries wanting to protect subsidies to domestic sectors and developing countries seeking substantiation of fair trade on agricultural products.

Due to this stalemate within the WTO, many bilateral agreements have been signed in the past decades to allow trade between nations mostly to the benefit of developed countries and to the detriment of developing countries. Additionally the past years have witnessed the negotiation and implementation of regional or even mega-regional trade agreements. Those agreements go far beyond the WTO and the Doha Round, fostering the divide between the developed North amassing riches and the developing South being plundered by its so-called trade partners.

21st century trade agreements – agenda of the 1%, by Joachim Jachnow The WTO chessboard: queens vs peasants, by Biraj Patnaik Conflicting interests and controversies at the WTO, by Deborah James Outdoing the WTO? The New Rules of Trade in the making, by Shalini Bhutani Partners in crime? Comparing TTIP and TiSA, by Joachim Jachnow Setting the standards: how TTIP impacts Africa, by Sylvester W. Bagooro Legal relationship of RTAs and WTO, by Christiane Gerstetter U.S. and EU Trade Strategy Beyond the Doha Round, by Isabel Estevez A BIT better? The Global South’s recent Bilateral Investment Treaties versus the latest ’investment court system’ proposal of the European Commission, by Christiane Gerstetter What influence will TiSA have on international financial markets?, by Constantin Groll Controlling the South: the case of East Africa, by Yash Tandon