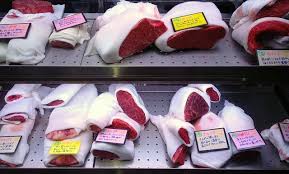 The United States has agreed to increase its low-tariff quota for Japanese beef in bilateral trade negotiations, sources close to the matter have said.

While it is not known by how much the quota will be expanded from the current 200 tons per year, Japan will be able to export more beef to the United States at a duty rate far below the 26.4 percent levied on quota-exceeding exports.

The United States levies an import duty of 4.4 cents per kilogram on the first 200 tons of Japanese beef each year.

Before the United States withdrew from the Trans-Pacific Partnership free trade pact in 2017, it had planned to set a 3,000-ton duty-free quota for Japanese beef and remove the tariffs completely in 15 years.

Japan will abolish import tariffs on U.S. wine in seven years after a bilateral trade deal takes effect, the sources said Sunday. Japan imposes a duty of 15 percent, or ¥125 per liter, on U.S. wine.

Under the TPP, Japan is eliminating import duties on wine in eight years after the pact entered into force in December 2018.

While the details of a broad agreement reached in August on the bilateral trade accord are yet to be announced, Japan is also expected to cut tariffs on U.S. farm products such as beef, pork, wheat and dairy goods to around the same levels as in existing free trade frameworks such as the TPP.