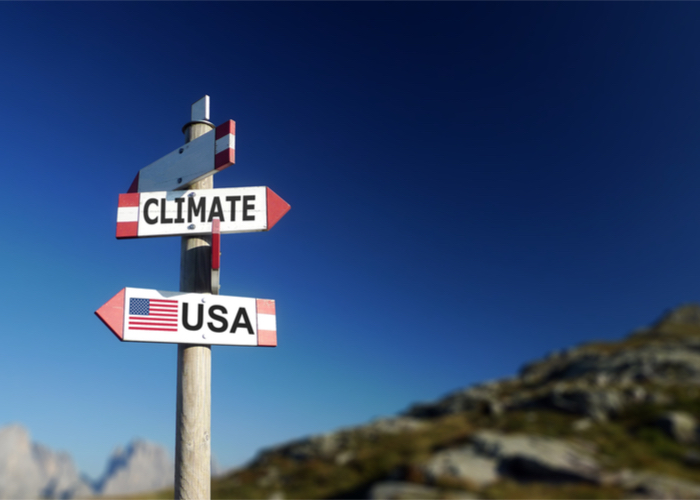 The US has banned mention of climate change from trade talks that Trump’s administration has been holding with the UK.

Leaked documents show that the UK raised the issue of climate change only to be bluntly told it is off limits because it is too politically sensitive and a ‘lightening rod issue’.

The document state that the “UK inquired about the possibility of including reference to climate change in a future UK-US trade agreement given that the UK has a strong historical stance on climate change and pushed strongly for the Paris Agreement.

"UK also highlighted the pressure for this that would come from civil society and NGOs. US responded emphatically that climate change is the most political (sensitive) question for the US, stating it is a ‘lightning rod issue’, mentioning that as of 2015, USTR are bound by Congress not to include mention of greenhouse gas emission reductions in trade agreements. US stated this ban would not be lifted anytime soon.”

This pandering to climate change denial is completely unacceptable in the face of the climate emergency.

But beyond this, it’s good to be clear on what the connections between trade deal and climate change are. Otherwise it might not seem that important for climate to be on the trade agenda.

The failed EU-US trade negotiations, TTIP, had a chapter specifically on the energy trade, which aimed to increase trade in energy while outlawing discrimination between dirty fossil fuels and renewable energy. Campaigners at the time said it could sabotage climate policy.

Last year, the EU agreed a very quick mini pact with Trump in an attempt to head of his threats of imposing heavy tariffs. It only covered two things, but those two things are both significant for the climate: gas and soybeans.

A fossil fuel, and a fossil fuel intensive crop. Soy is produced on mega plantations, often destroying rainforest and savannah in the process, with heavy use of pesticides and artificial fertilizers which are produced from fossil fuels.

Shipping goods around the world is itself currently a climate problem, as marine fuel oil is one of the dirtiest fossil fuels.

We know we must have strong, immediate action to tackle the climate crisis. After lost decades of inertia, we need binding regulation that can make real change happen.

But trade rules are written to promote voluntary self-regulation by industry – exactly the approach that has resulted in continued inaction and business as usual. Throughout the leaked papers from the US-UK trade talks, US officials keep insisting that they only want voluntary industry-led measures.

Whenever actual regulation is mentioned in the leaked papers, the officials emphasise the need for big business to help write the rules. They are pushing for corporations to get early warning of any planned laws, which might mean big business could block proposals before they are even seen by parliament.

That’s not all. If laws and decisions are actually passed to take meaningful climate action, trade rules have another ace up their sleeve: corporate courts.

Formally known as ISDS, these allow transnational corporations to sue governments outside of the national courts, over decisions that they don’t like. The amounts involved can be massive, and the threat is real.

We’re already seeing this happen on climate. The Netherlands recently took the decision to phase out coal power in the light of climate change, and promptly a German energy company, Uniper, has started threatening to sue in a corporate court.

And in Canada, when the province of Quebec introduced a fracking moratorium, energy company Lone Pine sued in a case that is still ongoing.

Corporate courts should not exist. They are unjust and illegitimate, and should have no place in UK trade policy. Yet the leaked papers show it seems increasingly likely that they would be included in a US-UK trade deal.

Tackling climate change will require a transformation of our economy and society – a system change. In a change of that scale, we need to ensure that those with least responsibility for the crisis are not the ones that end up paying for it.

Those on the frontlines of the crisis in the global south have contributed the least in terms of historic emissions, with responsibility lying in the global north. Part of balancing this debt should include transferring technologies to the global south to help tackle climate change, and supporting policies that can build a more sustainable future – a global green new deal.

Yet trade rules explicitly outlaw technology transfer, and try to limit the flexibility for governments to introduce the active industrial and developmental policies they need.

In the UK and elsewhere, we also need a just transition that provides decent jobs. Those who currently work in polluting industries should not be penalised – they need to be able to find good new jobs helping to make the transition happen and in new sustainable sectors.

To do this, governments need to be able target resources at communities that are likely to be affected. This could be by making it a condition for a company wanting to invest that they create jobs locally. But again, this is something trade rules say is not allowed.

Trade deals have teeth in international law. They override climate agreements, and currently they are a problem for climate action.

We need to change that. A throwaway reference to climate change in a deal does nothing. We need to fundamentally change the way trade deals are done so that they have climate justice at their core. And we also need to stop the trade deals that would make the climate crisis worse.

Take action and join our campaign to stop a US-UK trade deal.