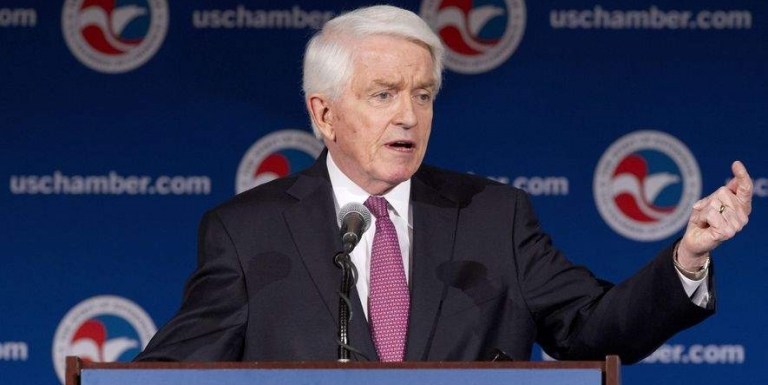 US Chamber President and CEO Thomas J. Donohue strongly opposed the withdrawal of the KORUS FTA in a statement issued on September 5

The U.S. Chamber of Commerce opposes U.S. withdrawal from KORUS in the strongest possible terms. We do not believe this move would create a single American job — but it would cost many.

KORUS has boosted U.S. exports in a number of areas, and many of these would be at risk as Korea restored tariffs against U.S. exports. Under KORUS, U.S. aerospace exports to Korea have doubled to $8 billion, and U.S. services exports have increased to more than $21 billion. U.S. exports of key agricultural products have soared as KORUS has begun to phase out double-digit tariffs, which is why nearly every major U.S. agricultural group strongly supports the agreement.

“Ironically, states across mid-America that voted for the president would take the hit from withdrawal as their agricultural and manufactured goods exports fell in the wake of such a move. It would damage White House relations with allies in the business and agriculture communities and in Congress, greatly complicating other initiatives such as tax reform. And withdrawal would alienate one of our strongest international allies, jeopardizing national security at a time of crisis on the Korean peninsula.

“Trade agreements like KORUS and NAFTA are hard-earned over years of careful deliberation among commercial allies, and once implemented, they form the solid foundation upon which our economy and national security stand. There are better ways to assess an agreement’s success than by the trade balance, and there are better ways to address an agreement’s perceived shortcomings in enforcement than to withdraw from it entirely.

“It’s difficult to imagine a move that would bring more self-harm to our economy and national security, with no benefit in return, than withdrawing from KORUS. We urge the administration not to make this rash and irresponsible move.”

The U.S. Chamber of Commerce is the world’s largest business federation representing the interests of more than 3 million businesses of all sizes, sectors, and regions, as well as state and local chambers and industry associations. Its International Affairs division includes more than 70 regional and policy experts and 25 country- and region-specific business councils and initiatives. The U.S. Chamber also works closely with 117 American Chambers of Commerce abroad.