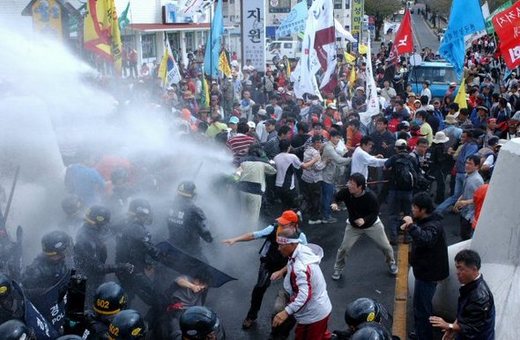 But issue may be eclipsed by pharmaceutical pricing controversy

With the fourth round of talks underway for a proposed free trade agreement (FTA), the U.S. has reportedly made a proposal regarding protections currently in place on the South Korean film industry.

Before the official FTA negotiations began, the U.S. had originally demanded that Seoul scrap entirely its "screen quota" system, in which domestic films must occupy a certain share of screen time. As a compromise for beginning the free-trade talks with the U.S. in June, South Korea halved the screen quota, from domestic films needing to be shown in theaters 146 days per year to the current 73 days per year.

In its new proposal, Washington has reportedly said it would refrain from pushing for a further reduction in the number of days, but said that films delivered via digital copy be excluded from the terms of the quota.

A high ranking official of South Korea’s government said under condition of anonymity on October 23 that the U.S. had made that demand during a telephone conference last month between two countries regarding the service sector.

Currently, the majority of film prints distributed to theaters are in the form of film stock. But industry watchers predict that in a matter of years, films will be distributed to movie theaters online, via digital files. This would mean the U.S. proposal could be a loophole in which the screen quota system will be neutralized in the future, when all movies are digitally transmitted, industry experts said. South Korea thus reportedly wants digital prints to also be included under the quota system.

Seoul’s handling of the issue so far has not made the South Korean film industry happy. It says its burgeoning film industry needs to be buffered from the much stronger financing available for Hollywood blockbusters. Actors, producers, screenwriters, and directors have staged protests throughout the year, demanding that the original 146-day quota be restored. "If the government accepts the U.S. proposals, it is tantamount to a negation of the government’s pledge to protect the local film sector," an industry official said. The official said this was true "especially when we are moving into a digital era; it is like scrapping the whole screen quota system."

However, all information regarding both the alleged U.S. and South Korean proposals comes from sources inside the South Korean government, who asked not to be identified due to the sensitivity of the topic. With no official announcement from either side regarding their stance on the issue, there is no way to know for certain where the screen quota subject will go in future negotiations.

Observers of the talks and market watchers have expressed concerns that the South Korean government could be using the movie industry as a compromise in the ongoing negotiations to gain leverage in other sensitive sectors, such as pharmaceuticals.

With its proposals, the U.S. wants to prevent South Korea from being able to increase the screen quota again down the road after the FTA is signed, an official said. "We have anticipated that the U.S. would make such a demand," a negotiator on the South Korean team said, under condition of anonymity.

South Korea and the U.S., which have failed to make a breakthrough in negotiations on an FTA, launched their fourth round of talks on October 23 on South Korea’s southern island of Jeju. This round is slated to last five days.