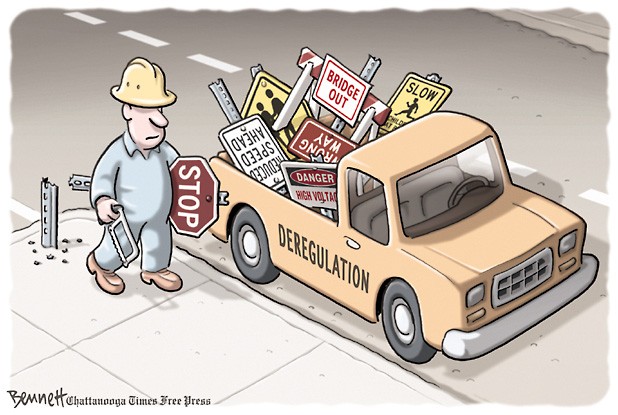 At a recent debate on the Transatlantic Trade and Investment Partnership (TTIP), advocates for TTIP once again repeated the mantra that nothing in TTIP, not even the section on regulatory cooperation, will affect the right of the parties (the EU, the US and also Member States) to regulate. I have written about this claim before. In this post, I want to – once again – stress that this argument is misleading and it misses the point.

Of course, we only have partial information on the content of TTIP, as the US insists on secrecy and these negotiations are in any case constantly changing shape. But from what is known it is clear that the much-touted “right to regulate” is limited by a proliferation of other constraints which – once TTIP is finalised – will make it much harder to introduce new regulations. For example:

The ambiguous concept of “not more burdensome than necessary” [1] which could mean that parties must prove that the measures they introduce are necessary;

The requirement that new laws are as “least trade restrictive” as possible;

The growing number of provisions on domestic regulations and transparency in ongoing trade deals which can put governments under pressure from trading partners whenever they want to legislate in areas that could affect trade and investment flows.

All these constraints restrict the regulatory sovereignty of legislators. However, this is not the most important restriction on law-makers and regulators. Under TTIP, the right to regulate also risks being put under huge political pressure.

Why does it miss the point?

And that is why reassurances that TTIP will not restrict law-makers from legislating miss the point. Legally speaking, none of the parties may be able to restrict the regulatory sovereignty of any of the other parties (subject to the restrictions written into the agreement itself). Indeed, there is no right to veto domestic regulation under either the “vertical” or the “horizontal” regulatory cooperation mechanisms, even when that regulation has an impact on trade.

However, both the US government and business will be able to put pressure on EU legislators and regulators who might be considering legislation. There will be a number of different mechanisms to do so, such as the advance notice of planned legislation, the impact assessment procedures required to assess the impact of future rules on trade and investment, the “regulatory exchanges” and the stakeholder consultations. These all provide an opportunity to raise concerns about future legislation.

In this way, the US, or businesses can delay any regulatory initiative or water it down. Because while there is a right to regulate, there is rarely any obligation to regulate. And our experience demonstrates that well-organised pressure can successfully block regulation, even if it is long overdue in terms of public interest.

It goes without saying that the EU might use the same routes to influence US public interest proposals.

Now people might object that more stakeholder involvement is a legitimate part of modern rule-making. That is true. What is worrying though is that TTIP creates or reinforces imbalances that result in special and privileged treatment for the US administration and well-resourced stakeholders, i.e. business, to influence our domestic law making, even before our own legislators are given a chance to voice their stance (see previous blog post).

Often times, we hear that the “right to regulate” will be guaranteed under TTIP. As a matter of fact, Commissioner Malmström’s latest proposal for an investment court mentions that ’’governments’ right to regulate would be enshrined and guaranteed in the provisions of the trade and investment agreements’’. I wonder, isn’t this the strongest indication that this right might come under pressure in TTIP?

In the case of the investor-state dispute settlement (ISDS) mechanism and its newly proposed alternative of Investment Court system (ICS), technically speaking, the governments’ “right to regulate” would not be affected. Nevertheless, reality has shown that governments might refrain from regulating because they know that if investors feel harmed by public interest regulations, they will come after them for exorbitant amounts of money.

The principle of the “right to regulate” in TTIP exists on paper, nevertheless, exercising it in real life will be the real challenge.

[1] Although this is traditional trade language there is no justification not to modernise it in order to combine trade and public policy objectives.